IS IT WISE TO ASK?

When I go into the voting booth, do I vote for the person who is the best President or the slimebucket who will make my life as a cartoonist wonderful?

Since we have a Presidential election coming up in October the above quotation, from American cartoonist Mike Peters, came to mind. And speaking of cartoonists , since 2005 I have been secretary of CIE Writers’ Group. We were, and still are, completely dependent on sponsorship and artists and corporate bodies have been very generous with us down the years.

I recently sent the following request (and it was a request and not a demand) to Allen Kavanagh one of our better known cartoonists;

“We need a simple line drawing, for in-house distribution to Dublin Bus employees, during the Pope's visit. Unfortunately we won't be in a position to remunerate you but if you are willing to do it I'll send you the details.” Was Mikhail Bulgakov right when he said, “You should never ask anyone for anything. Never- and especially from those who are more powerful than yourself.” I don’t know. All I know is that Mr. Kavanagh was underwhelmed to say the least and replied as follows;

“Explain to me why you think I'd work for free? How long would I get to stay on a Dublin bus if I didn't pay?”

That was fair enough and I explained, as best I could, that I had no way of knowing that he wouldn’t be prepared to do a small job for free. I went on to explain, “We are not Dublin Bus; we are a writing group made up of Dublin Bus employees and retired employees.”

To which he replied; “You contacted a professional about engaging his professional services and you had no way of knowing I'D CHARGE FOR MY WORK? What other line of business would you contact and expect free work? My time and skill have value. Stop expecting artists to work for free.”

Notice the instruction at the end?

I was soon told that Mr. Kavanagh had published my original request on a networking service. (He also posted our email address which had an unexpected benefit but that’s a story for another day.)

Mr. Kavanagh did get a large volume of support from his fellow tweeters, some of whom used the “vernacular of the soldier” and the crutch of the crippled conversationalist a lot. One Nigel Bell from Brisbane managed to establish that I was, “Not brought up properly”. And somebody called “Fuster” provides a well-executed line drawing of a one-fingered salute which he suggested Mr. Kavanagh sends me a line-drawing of a one-finger salute.

I have just learned that Mr. Kavanagh is featuring in a programme on national radio about illustrators / cartoonists being asked to do work for free. If he wants a list of artists who did work for our group free of charge I can supply it. He refers to red mist being on him and according to himself he has, “. . . A zero-tolerance name-and-shame policy when it comes to this...” It is not clear to me who he is going to shame.

The Capilano suspension Bridge spans 450 foot across the Capilano River in North Vancouver. It’s a flimsy structure made of five-foot-wide wooden struts attached to swinging wire cables. If you were crossing it you would be aware that the wire handrails are too low to protect you should you stumble, as it wobbles badly. The river is 230 feet below. One day in the 1970's a very attractive young female stood on this rickety bridge, stopped some men and asked them if they would answer some questions for a psychology study of the effects of scenic attractions on creativity. They were asked to write a short story.

How do I know this and why am I telling you? Let me explain. Of the 69 events at Listowel Writers’ Week I attended as many as possible. Some stuck in my mind. One was a talk given by Clinical Psychologist, Ian Robertson who told the above story. He went on to explain how fear increases adrenaline which causes certain symptoms. You can guess the rest! If you ask people to rate the attractiveness of people of the opposite sex after they’ve been to the gym, on average they think they’re more attractive compared to when they haven’t had exercise. Mr. Robertson says it is, ” . . Possible to harness anxiety and turn it into that most positive and energizing of emotions, excitement”.

It was one of the most informative talks I have ever attended. I came away knowing why I am a bit dopey (well, more dopey than usual) for about half an hour after getting up in the morning. It has to do with lack of noradrenaline in my puny brain. Mr. Robertson is one of the humblest of men who has no trouble saying things like, “I was a bit stuck as to where to go from here” or “Had I known what I know now.” “I didn’t properly think it through. . .”

I have since read his book, "The Stress Test” in which he explain in detail and in lay-mans’ language why some people get so distressed over trivial setbacks while others live through life-changing tragedies with very little emotional upset.

The German philosopher Friedrich Nietzsche wrote in the “Maxims and Arrows” section of his book, Twilight of the Idols in 1888, “What does not kill me makes me stronger."
Ian Robertson freely admits that, though in his early years, he did not fully agree with the great German philosopher he now would have difficulty disagreeing with him. But the well-qualified Mr. Robertson doesn’t agree with all the theories of many of his famous and well respected predecessors. Early in the book he refers to one belief that, ” . . . still clung like smoke to the curtain of assumptions underlying the world of psychiatry in which I trained and later worked.” This is the sort of flowery language which is to be found right through the book. And there is no scarcity of subtle humour. And, “A major discovery always triggers an avalanche of research, and over the next decade hundreds of papers appeared showing that an unquestioned belief for the last hundred years about the human brain was wrong; it is changed by experience.”


This book outlines in detail how the right level of challenge and even stress can help us to flourish and achieve more than we ever thought possible. I have to endorse the statement of the Daily Telegraph critic, “Read this. It might just save your life.”


The Stress Test is published by Bloomsbury.

If John B. Keane had lived another sixteen years he would have been 90 on July 21st. Or, as his son Billy has written, he would have been 270 as, “He made three days out of every birthday”. In a wonderful piece in the Irish Independent Billy refers to his father in the present tense emphasizing that he is still with him in a very special way. “I tell him my problems and my worries and just the other night, I imagined him saying to me; ‘Thing-a-nothing, Bill boy.’ Everything was ‘a thing-a-nothing’”.

The good people of the Seanachai Kerry Writers’ Museum, in Listowel, held a John B. Keane Festival in memory of the town’s most famous son. (See Poster bottom of page.)

The KnockanStockan festival returned to Lacken on the shores of the Beautiful Blessington lakes for 2018, after a one year break in 2017, with an impressive first lineup setting a sensational standard for the many acts. . A true representation of the high caliber of music in Ireland, home-grown talent and international artists of critical acclaim fitting for all musical tastes were sure to impress even the most refined musical palate.

And while I’m on the subject of my own neck of the woods, Blessington songwriter Peter Keenan’s latest composition My Blessington Rose is in the final of the prestigious Mick McCarthy Ballad Writing Competition in Finuge County Kerry on Sunday 5th August.

Dublin writer, Eddie Naughton, has taken O Casey’s iconic Joxer Daly and given him a new life in a one-man play Joxer Daly esq. It is almost at the end on a successful run in Bewley’s Grafton Street, in Dublin. The show is no less than brilliant with the immortal Joxer played by that multi-talented actor Phelim Drew. 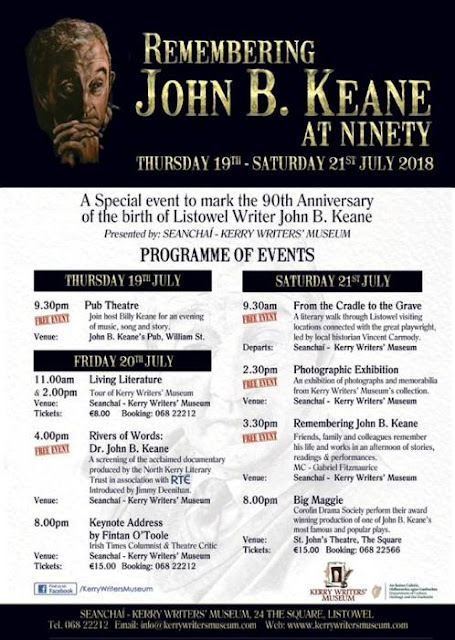