By Bud Lemire
Across the galaxy, far from planet blue
Is a man, who looks nothing like you
Uneeka, unlike anyone you would know
Because in the dark, he gave off a bright glow
It didn't bother him, that he never needed a light
Others seemed to think, he was just too bright
He could read a book, without turning on a light
Others who came too close, thought it was a fright

One woman, was intrigued by his glow
She loved to watch him, but he never did know
Ungila was beautiful, Uneeka was too shy
So when she came around, he would pass her by

So, kiss him, she did, while he was feeling low
Brighter than everything, was his glow
He turned to her asking “why did you do this?”
She smiled and replied “You just needed a kiss.”

Uneeka and Ungila lived happily forever. And their days
were never dim. Because Ungila had a glow too. Together
their days were even brighter, because they had each other.
There was never any darkness, because they always saw
everything for what it was, even on the darkest day.. 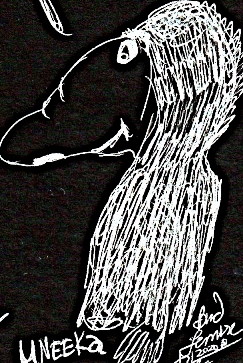