By Melinda Cohenour
Yes. I am related to both the Younger Gang and the Dalton Gang through my Younger paternal line. The Dalton's were the children of Adeline Lee Younger and James Dalton. Adeline Lee Younger was the illegitimate child of my GGGG-Grandfather, the Colonel Charles Lee Younger (her mother being Parmelia Dorcas Wilson rumored to have been seduced by the Colonel when he brought her to assist in the household after yet another child was born to his wife, Sarah. Parmelia became a mistress to the Colonel, bearing some seven children who bore his surname). Adeline was a favored child and actually resided in the home of the Colonel and my GGGG-Grandmother, Sarah Sullivan Purcell Younger, as shown by Census records.

Julia Dalton was connected to me through two of her marriages, interestingly enough. She is quite a fascinating character, whose life was spent Hell-bent for excitement, it would appear. She and her sister left their parental home and headed to the Indian Territory when yet teenagers. They were involved with some of the most colorful characters in Western lore and quite romantic tales have been woven concerning the girls, themselves. Julia Dalton was married first in 1886 at the age of 16 to a full-blood Delaware Indian called Albert Whiteturkey. There exists an interview with a Katie Whiteturkey Day (Ka-tel-mah) Albert's younger sister, who indicates their marriage lasted eight years. I do not believe this to be the case, but have information that the marriage (length was closer to eight months, perhaps, since Julia married Robert Gilstrap in 1887) ended by "Indian divorce" meaning Albert tired of Julia, packed his things and left her.

Next, Julia married Robert Gilstrap, who is characterized by all as a gunslinger and outlaw who was ambushed and killed by a Lenape (Katie says a Delaware) Indian outlaw named Frank Leno. Katie claims to have been in the Bartlesville store with her husband and baby when the shop-owner warned there would be trouble, that Leno was "laying for Gilstrap". She says her husband spirited her baby from the store and she hid behind a barrel before Gilstrap arrived and was killed by a single shot without warning by Leno. At least one account I found indicated the killing was occasioned by the dalliance by Julia with Leno who may or may not have killed Gilstrap at her suggestion. Katie Whiteturkey Day was about 74 years of age when interviewed and it is possible her memories may have been affected by her advanced age, although I have found newspaper accounts of the killing of Gilstrap and subsequent trial of Leno.

Jennie Mae Gilstrap was presented as the child of this marriage, although rumor has it she was the illegitimate child of Julia's sister, Lucy Ann Johnson. (Lucy Ann is also rumored to have been the "wife" or mistress of Bob Dalton, another of the Dalton Gang cousins of mine.) Jennie Mae's true parentage is not known although she is listed on the US Native American Enrollment Cards (1898-1914) as "Indian by blood". This would rely upon her being the biological daughter of Robert Gilstrap, who was half Cherokee, his mother being Sarah Jane "Jennie" Blythe of the Rogers clan. (This, by the way, lends credence to Robert being the father, since it was a common practice to name the children after the grandparents, thus the given name of Jennie. We have not yet established whether or not the Gilstrap line itself was of native American descent although they traveled to the Indian Territory and intermarried with Cherokees often.) Jennie would have been about two years of age when Robert Gilstrap was murdered 24 December 1889.

Robert Gilstrap was the son of Andrew Jackson "Jack" Gilstrap, son of Peter Gilstrap, son of Richard Gilstrap by Mary Truitt who was Richard's first wife. My line descends from Richard's second wife, Nancy Ann Wright. Thus, Robert Gilstrap was my 2nd cousin, 3x removed. He died on his 27th birthday, Christmas Eve, as he arrived at the local trading store to do his Christmas shopping. Sad.
Julia next married Robert Ernest "Killer" Lewis, a known outlaw who ran a saloon known as the Uno Bar. He was selling two-percent beer, believing he could circumvent the "no alcohol" law in the Territory because of the dilute content. He had a long history of trouble with the law and engaged two Deputy US Marshals, Keeler and Williams, in gunfire when they entered his bar with the intent of closing it down. He killed Williams and was then shot down by Deputy Keeler. Julia apparently inherited the Uno joint and is reputed to have continued to operate it for some time.

Next in line was Emmett Dalton. When and where Julia and Emmett Dalton first met remains shrouded in mystery, as well. They constructed a romantic tale of having met when Julia was "playing the organ, like an angel, in the little church" where Emmett fell instantly in love. Now, from the history of this girl and her sister, it is highly unlikely this ever happened! They expanded the tale to include Julia waiting for years for Emmett to be pardoned and released from prison. If, in fact, the rumors that sister Lucy Ann Johnson and brother Bob Dalton were secretly married, it is possible Julia knew Emmett before the infamous shoot-out that left the Dalton Gang decimated. At any rate, they enjoyed a number of years notoriety and, even, respectability during the Hollywood era preceding Emmett's death.

Little is known of Roy Johnson Dalton other than the fact he is listed on Census records as residing in the home of Emmett and Julia as a son.

(Please do not use all or any portion of this text without attribution to Melinda E. Cohenour, author. The comments, conclusions and historical references are the product of my research and should not be utilized without providing this attribution. MEC - 14 October 2013.) 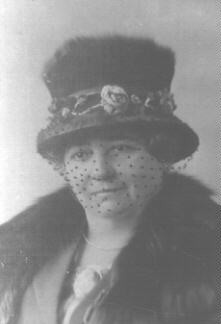