View from My Back Steps

From ragged lawn to dense woodland – that’s the trajectory my urban yard has been on for the past 35 years. When we bought this house, it was for the often charming interior with its large family room, massive fireplace and hearth, built-in bookcases, and window views. But the window views at that time were of a, frankly, rather ratty St. Augustine grass lawn, a scattering of poorly chosen and poorly cared for shrubs, and a couple of dead trees.

I’m not accusing the previous owner of being a gardening slob –he was, shall I say, gardening challenged.

Being at the time in my energetic and ambitious mid-40s I immediately took on the job of converting that scene into a network of richly planted flower beds, accented by some new trees and a variety of ornamental shrubs and vines. It took years and a toll on my spine, but I got ‘er done, only to find that a garden that ambitious took almost daily maintenance – weeding, watering, trimming, replanting. And after 20 or so years of inevitable changes in my garden, I began to reconsider what I was doing.

I was “rewilding” my yard.

The concept of “rewilding” is one that evidently has been slowly developing over the past half-century or more, mostly in Europe, but also in America. Books in my home library such as “The Language of Trees”, “The Cast Iron Forest”, “The Natural Habitat Garden” and more immediately Isabella Tree’s “Wilding” about the work she and her husband have been doing with their old estate in England, plus Paul Jepson’s and Cain Blythe’s recent book “Rewilding” have strongly influenced my outlook on what an urban garden should be doing to improve the general environment, including its wildlife.

“Rewilding” is all about ecological recovery, not about growing cut flowers or establishing a miniature botanical garden. Though that was fun for a number of years.

What I had been gradually doing, by default, as I aged, was just letting things grow that were there and that seemed to thrive without much interference on my part. But that’s not as simple as it sounds in a world where plants (and animals) from all over the world can come into your yard, whether they go well together or not. It’s one thing to welcome oaks and elms and hackberries, coralberries and beauty berries, dogwoods, and redbuds into your home environment. But what do you do about the Asiatic jasmine, Asian honeysuckle, Siberian privet, Chinese wisteria, crepe myrtle, etc. that you may also have there? We are the heirs of hundreds of years of a gardening tradition that welcomes plants based on how pretty they are rather than how well they fit into the native ecosystem where you live? How do plants that evolved for millions of years on the other side of the world fit in with birds, insects, and animals that did not evolve in those same places – that, in fact, may not even be able to utilize your foreign plants as food sources or even recognize them as potential food?

Have you ever noticed that apparently nothing eats the leaves of privet bushes? Or of Asian jasmine? That may sound like a fine thing – it means they grow very well in an American garden. But what also means is that our native wildlife goes hungry in the presence of what’s often a jungle of exotic plants. Not just the “pests” but also the butterflies, the birds, the bees.

The number of birds in the United States and Canada has declined by 3 billion, or 29%, in the past 50 years alone. And that’s just one example of the devastation we’ve been living through, often without even noticing it more than just marginally. “Gee, we sure used to have more robins and goldfinches around here when I was a kid.” Yes, you did.

There is solid scientific evidence that much of the world prior to about 40,000 years ago was a range of savannahs rather like those in South Africa, with a scattering of woodlands and a lot of scrublands and prairies – all maintained by a huge number of “megafauna” animals like giant bison, mastodons, mammoths, rhinos, camels, horses, deer, elk, antelope. And then much or most of the megafauna animals disappeared – likely as the result of overhunting. Our killing off the bison herds in the Great Plains was just the last of many similar events.

So, how does that apply to my suburban backyard? I obviously can’t keep sheep or deer on my ¼ acre lot with its small house. But what can I do?

What I actually have done (and they are baby steps, to be sure) is to encourage the growth of more native plants such as oaks, redbuds, coralberries, beautyberries, wild roses, Mexican petunias, spiderwort, snailseed, greenbrier. I’ve almost completely eliminated my former lawn areas, with just a gesture toward a small lawn in front to keep the neighbors happy. I’ve planted a lot of native perennials and shrubs such as lyreleaf sage, Louisiana irises, Mahonia, Dutchman’s pipe, and hollies.

As a consequence I have almost year-round flowers, I rarely have to water artificially except for spot watering around a few of the smaller flowers. I have native butterflies such as pipevine swallowtails, a variety of bees and bumblebees and birds.

And in recent years I’ve been regularly visited by raccoons and opossums, in addition to the fox squirrels that have always been here thanks to the profusion of nut trees in this naturally wooded area.

All the rich foliage in my little garden has almost certainly had a positive effect on the balance between oxygen and carbon dioxide in the immediate area; the soil in my yard (where I never throw away a single leaf at any time of the year) has been regenerated from what was, in some areas, bare yellow clay to a thick layer of sandy loam filled with huge earthworms and other insect life, returning all the nutrients to the earth after they have passed through the plants. It may be a “messy” yard, but it’s a healthy yard. And both fun and rewarding to live in.

While you may not be ready for the near-jungle I have now, you might consider the concept of “rewilding” yourself and how it might be applied to your own yards and gardens. Pic below is of a Post Oak Grove. 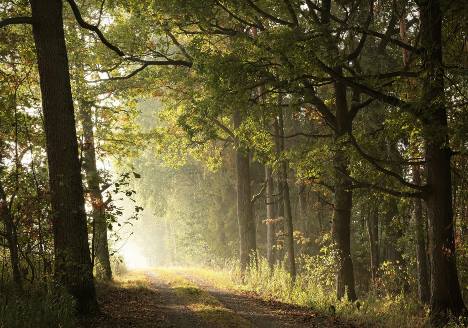