Only a few fields from my home (the fields are small in West Wicklow) the Knockanstockan Music Festival was held from July 23rd to July 25th. Despite the clever word-play the festival, which is a volunteer-run event and was named Best Small Festival in 2008, is not in either Ballinastockan or Ballyknockan but in the townland of Lacken. It featured more than 100 bands over three stages and a good time was had by all. 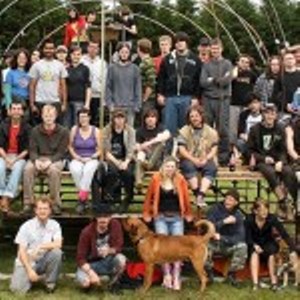 And . . . Lacken has a new school; due to open on September 01st. And the old schoolhouse (my one and only academy) which was bought by the local community from a generous Landlord, in 1916, for a nominal purchase price of £5 will see a change of use. The granite building (listed) which dates from 1869 will be used as a community hall, heritage centre or whatever the local people decide. (See sketch at bottom of page.)

There will be a “Lacken website” set up shortly but, in the meantime, ex-pupils can make contact with me at: mattielennon@eircom.net.

Once again the CIE Writers’ Group is bringing out a collection of poems, plays short-stories, anecdotes, articles and essays written by people who work, or have worked, for the CIE group of companies.
“IT HAPPENS BETWEEN STOPS” will be available in hard-copy and on CD-Rom. Details from ciewriters@gmail.com

New York author, Lawrence Block, says in the introduction, “The quantity and quality of work produced by this group, taken from a workforce of a few thousand people, would do credit to a city of many millions.“
The following is a small example of the treat in store for you from the CIE literati.


THERE IS SOMETHING ABOUT MARY
By Pat Cavanagh

You could not help noticing Mary. She was tall and tanned with long blonde hair and beautiful green eyes. She would crack her fingers in class one at a time - or all at once - if she was bored. When she laughed or smiled (which she did often) it was impossible to be cross with her, no matter how much this disrupted the class. She would ask permission to speak, and without waiting for a reply, would launch into an impassioned appeal to save the starving children in Africa, defend the environment, or shut down the nuclear reactor at Sellafield. By the time she was finished, maybe five minutes later, she would have the entire class spellbound. You could be sure no more class work would be done for the rest of the day as Mary and her class mates organised themselves for the coming campaign. There was very little I could do – I realised I had a truly remarkable personality in my class.

About three months ago, we were doing music. I had asked the children to bring along some of their favourite music. Mary’s father had been a singer in a band when he was young. She had grown up in a house full of music, as he still played part time. While the others brought in the latest top ten hits, she brought in music by the Beatles, Rolling Stones, Mozart and Beethoven, as well as many other well-known singers and musicians from the 1960s and 1970s. She explained the subtleties and the wonders of a whole range of music from Abba to ZZ Top, using examples that she copied on to a CD. I know quite a lot about music from that period, but I have to admit I was awestruck by the depth and breadth of knowledge of a girl who was not even born when all this music was happening. I worried slightly as to what she had up her sleeve for her classmates.

She decided that the school needed a school band, and that her classmates were going to be the band members. Now, our school is in a very disadvantaged area of the city, so asking parents for funding was out of the question. Mary had thought of that, and within two minutes had started the class writing letters (she dictated, the class wrote) to a hundred local and national businesses seeking sponsorship. The letter was very clever. We would like your help in training our school band; do you have staff who would be willing to spare their time and energy to teach us how to play music; could you help us to acquire working second-hand guitars, drums, a keyboard and so on; we are not looking for cash. Each letter was written by hand. The letters were delivered by hand all over the city that evening by a small army of her classmates on their bikes.

The results were astonishing! Dozens of people, including many well-known faces in the music business wanted to become involved. Every Saturday morning the school hall rocked as the students practiced music and singing under the guidance of skilled and talented people who once were famous in their own times. Word spread, and one day they were invited to appear on national television.

Mary didn’t tell anyone about the pain until she collapsed in class. The ambulance seemed to take ages to arrive. She forced her big smile for a paramedic who told her that his son had changed from local thug to guitar player extraordinaire thanks to her influence. Mary had just finished telling us about avoiding antisocial behaviour, but had not been her usual self while speaking. An hour later, during a break, I phoned the emergency department and was told she had had a cardiac arrest in the ambulance but had been resuscitated by the ambulance staff. A police car had collected her parents and they were with her. The outlook was not good.

I can’t remember the rest of that day or the days that followed. Sure, class continued without interruptions and without periodic cracking of fingers. But things were very quiet until just before class broke up for a midterm break. The headmaster called me aside and told me that Mary had had another cardiac arrest and was not expected to survive. She was unconscious. When I told the class that Mary was very ill, they decided there and then they would sing and play for her. We all trooped down to the music hall, collected the instruments, and then marched to the hospital. The school band squeezed into the hospital’s tiny chapel, and Mary, wired to various machines, was then wheeled in. She seemed to be asleep, but somehow she managed her big smile when the music started.

Now, I’m not a religious person, but I’ll swear to my dying day a miracle happened that afternoon. Gradually the colour came back to her face. Her hands and then her feet moved with the music. She tried to sing along. Her parents didn’t know whether to laugh or cry. Two days later, she was sitting up and chatting to everyone around. The doctor told her he would fix the bad blood vessel to her heart by sliding a tiny instrument up one of the veins in her leg under local anaesthetic. She could watch the x-ray if she wanted. Three weeks later, she was back in school, cracking her fingers, disrupting the class with impromptu speeches, and flashing her smiles. Yes, there is something about Mary.

in the shallow water
there sweeps a cold wind
a lone heron hangs-out
and boldly stalks
a fish, or an eel maybe
it feels that is there,
then with startling speed
it pricks its prey.
Death-so sudden
but winter has come
Still, when all is done
and happy with its lot
this gaunt bird
arches its wings
and is silently away.

ByThos Maher
Click on Mattie Lennon for bio and list of other works published by Pencil Stubs Online.