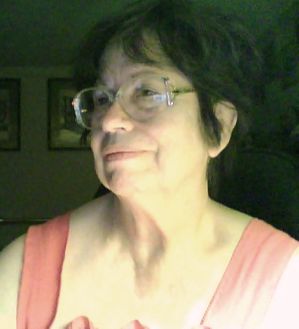 So here we are in the month of May. Poets promise May flowers and the weather forecasters say May always has the highest number of Tornadoes of any month. Several bad ones have already devastated many areas from the Canadian border down to the Gulf of Mexico during April. Though the poets also mentioned April showers, none fell in our part of Texas nor has there been rain in the last seven months. Needless to say that set up Texas for the wild fires which have raged from the Southwestern mountains near the Davis Observatory to the Eastern edges of Possum Kingdom Lake, wiping out most of the State Park at the Lake.

One of the poems opines on the true cause of these fires ("Texas Fires") and you will find "The Bubble Bath Way," and the based on truth 76 line "Monster in the House," all by yours truly. A bit of self indulgence, perhaps, (one line per year) but this is natal anniversary month for self and Leo C. Helmer, our cooking columnist. ("Cookin' With Leo.")

We are introducing Joanne Sprott aka MuseLady11, a poet new to our pages with four of her compositions: "The Silence," "Balance," "Open the Eyes of Your Heart," and "A Texas Fall." Yes, she lives in Houston and three of the poems have been previously published on her blogspot, but she hopes to get some critique through our publication with a new audience. A creativity coach, herself, she is always striving to develop new venues for expressing her talent.

John I. Blair's poetry finds itself being written even when he is sedated (see "Hospital Hawks.") His other poems for this issue are: "Ramping Up," "Sometimes The Sun, " "How Comfortable," "No Leg To Stand On," and "Feeding The Birds by Starlight." Our songwriter Bruce Clifford sends along three poems: "The Ocean is Warm," "Without You," and "Look at Us Now."

Mattie Lennon brings us another excerpt from It Happens Between Stops by the author Declan Gowran in his column "Irish Eyes." Thomas F. O'Neill's column "Introspective" discusses the importance of teachers and teaching.

Eric Shackle shares the article lauding the examples of two dogs, "Sarbi and Horrie: Two Brave Dogs" while his regular "Eric Shackle's Column" tells us about two widely separated events, a whistling contest and an ocean cleansing cruise. Check out the "Mail Bag" for a link to some important safety information which is shown on the blog version of our ezine.

In addition to introducing a new poet, we are able to bring Denise Sebastian to Pencil Stubs Online with her romantic short stories she calls 'trysts.' Living in Oregon, she discovers she finally has time to indulge her writing hobby and has submitted "In the Clouds" for May. We hope to show more of her work in the future.

See you in June.