A lie which is all a lie may be met and fought with outright,
But a lie which is part truth is a harder matter to fight. (Tennyson.)


You could always know when a Ballinastockan person was telling lies . . . you could see their lips moving. But that changed slightly when a Tallaght man Jack Farrell inherited a small cottage in Kylemore. I suppose you could call it the Latin quarter of Ballinastockan.

Jack and his elderly mother moved in to it. He didn’t fit in all that well with the natives because you see Jack always told the truth. It could be said of Jack Farrell that all his stories ran parallel with the highest ideals of veracity. I’ll give you an example. He would tell the innocent mountainy men stories of rows in Tallaght and how “they fight in Tallaght with blades o’ scythes.” One time he was snagging turnips for my late father Tim Lennon. The father was very proud of his turnips and he said to Jack, “Did you ever see bigger turnips than them, Jack,”? “Wait till I tell you” said Jack, “when I was workin’ for the Bird Flanagan below in Greenhills Flanagan had a sow on the point of farrowing. And didn’t she disappear. We searched for her high up and low down but not a sign of the sow. wasn’t she after atin’ her way into a big turnip. An’ she had her litter o‘ bonhams in it. An’ that turnip was so big that the bonhams were nearly ready for sale by the time she tunnelled her way out the other side.” He was telling me about one year the crows were playing havoc with his own potatoes and he made a scarecrow and do you know what I’m going to tell you? Do YOU know what I’m going to tell you? So realistic was that scarecrow that the crows didn’t take another potato and they even left back some of that they had already taken.

Jimmy Norton told Jack about one day he was ferreting and he caught 100 rabbits. Maybe he did. Well he probably caught five or six anyway. Farrell ups and tells him about one day when he was shooting down at Balrothery. He was using a muzzle loader and after he tamped down the powder didn’t he forget to remove the ramrod before he fired at a clatter of wild ducks flying overhead. The must have been flying in formation, one above the other, because didn’t the ramrod spear three of them. Gravity then took over and ramrod and ducks fell into the Poddle River and the ramrod went straight through a salmon. As Jack was getting out of the river with his day’s kill didn’t he trip over a rabbit and killing him.

One night in a rambling house the subject of the old age pension came up. And of how when the Pinshin was brought in in 1908 the authorities had difficulty proving their age since registration of births only became compulsory in 1864. ( If you compare the 1901 and 1911 census you will find that some people aged nearly 20 years in that decade.) An applicant would be asked if they remembered a particular event (usually an Act of God) and then asked to swear an affidavit. A favourite bargaining line was “I remember the Big wind.

Jack Farrell, who was sittin’ in the corner, came up with the following story; “When Malachi Horan, who farmed in Killarden (it was at the back of Jobstown . . .and still is) went for the pension he was asked if he remembered the Big Wind. The Big Wind as you all know was in 1839 so if Malachi remembered it that would leave him over 70 in 1908. Malachi was more than equal to the challenge. According to Jack Farrell Malachi told the pension officer that, on the ***** that was the night of the big wind, he was sitting at the fire when a squall of wind took the roof straight off the house and it landed somewhere about Kippure. A pot of potatoes that was hanging on the pot-rack was blown up the chimney and at the top wasn’t it struck by lightning. The steam that came out of it was fright to the world and . . . they were the first potatoes in Ireland to be boiled by electricity. “

I know from experience that you are going to ask me if Jack Farrell ever told a lie So, I’ll tell you now. He did. It is said that you should only tell lies to your wife or the police. Well the one lie that Jack Farrell told was to his old mother. A Redemptorist Missioner in the course of a rip-roaring sermon on the evils of drink told the congregation that making poitin was a reserved sin. Which means that the penitent would have to go to the Bishop for forgiveness? Jack had made the odd drop of poitin and he told his mother that he would have to go to Rome to go to confession. So, he made his way to the Eternal city.

Daniel O’ Connell died on his way to Rome but Jack was just ready to head for home when he was bitten by an Italian Mosquito. It proved fatal. There’s a place in Rome called Bocca Della Verita. It means The Mouth of Truth. And it’s claimed by people who know that that’s where Jack Farrell is buried.


And . . .before I go; My old Alma Mater, Lacken Schoolhouse (at Lacken, Blessington, County Wicklow) was built by Lady Smith of Baltyboys House in the eighteen eighties. (See drawing below.) And on 16th November 1916 the building was “sold” to the people of Lacken and the precincts thereof, for the nominal purchase price of £5, by Elizabeth Graydon Stannus, granddaughter of Mrs. Smith and mother of Edris Stannus who was destined to become the world-famous Dame Nanette de Valois. A new school was built in 2010 and the old schoolhouse, no longer houses the moulding of the minds of the young and is now a community centre. Major repairs to the building are necessary and members of the Lacken Community Development Association are doing their best to raise funds to cover the cost of repairs.
It is an opportunity for the Lacken diaspora worldwide to contribute. The Lacken Community Development Association can be contacted at: lackencomdev@gmail.com. 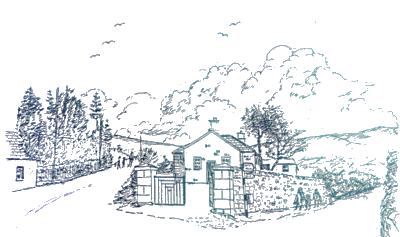