Vespas, those adorable little scooters one can sit on the way one sits on a chair, were first made in 1946, and the name means “Wasp.” The insect, not the social paradigm. Created by Piaggio & Co. of Pontedera, Italy, they now number in the millions.

Italians have the sexiest, most expressive language right? And there are those who also say they have the best cuisine on the planet. They also make the best scooters. How do I know that? I don’t---except in my dreams. And, like all humans, I too have dreams and one of my biggest was to own, and ride a Vespa. Yellow. Pink. Red. Not black. They don’t go as fast.

I have hinted like crazy to someone named Mongo to whom I’ve been married for nearly 60 years, that he should buy one for me—used is good---but I get nothing but a glassy glare. One time when I was in full bore Vespa nag, he sighed and said “No. If you get on one of those things you’ll die.” No I won’t, but talk about your votes of confidence. We went to Bermuda years ago and he wouldn’t let me rent one there either. OK, that would have meant driving on the wrong side of the road and that quite possibly could have ended up with the Bermudian EMTs using a giant spatula to scrape me off the roadway, mon, so I did cave that time.

No matter. I still want a Vespa and just because my balance is shot and my other things are slowing down just a little is no reason why I can’t have one. I mean plenty of geezer Italians are zipping all over Italy on them, and their coniugi don’t tell them they’ll die if they continue riding on their scooters. Of course I don’t know that for sure but I know a lot of Italians and I’ve never once heard any of them speak to their wise old Vespa riding buckarinos like that. Not once. Apparently, they’re a little more respectful to their Vespa loving family members than some people I know.

OK then—I’ll count my blessings the way Bing Crosby crooned in his 1954 hit, “Count Your Blessings (Instead of Sheep)” and then I won’t cry anymore because I don’t get to have a Vespa.

But I do have a friend— well I actually have a couple of friends---her name is Marilyn Taylor and she’s always known my secret yearning to own and ride on a Vespa. She also has a bloodhound’s nose for shopping and finds absolutely everything she wants. Last Christmas she presented me with a box and inside was, yeah you guessed it---a Vespa. Pink! I can’t really ride on it since it’s only about 6” high but it’s hand-made and adorable and very outsider-art looking, and I am beyond thrilled. The box had a woman’s name on it---she’d owned that tiny Vespa and put it on on Ebay, and it was there Marilyn found it, and bought it for me. I wrote to that woman who lives in Surprise AZ (what a charming name!) and she answered. She was so nice. She told me when she and her new husband took a trip to Europe many years ago when they were very young and much in love. They’d ridden on Vespas back then in Italy, and when they saw this little tin Vespa in a gift shop in a small village, they bought it as a keepsake and memory of their joyful love and happiness.

Well, as we all know, joyful love and happiness can sometimes go awry and theirs did, so the lady from Surprise put the tiny Vespa on Ebay and now I own it, and she told me she is delighted the little thing will have a happy home again.

My tiny pink Vespa now lives on our mantel where I can see it every single day and – this may sound a little weird—but when I look up at it I get this strange sensation of wind blowing through my hair. Really! It’s true! 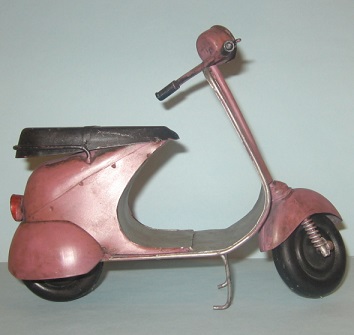