This is an Irish surname which derives from the ancient pre 9th century Gaelic O'Duibhgeannain. The translation is 'the descendant of the sons of the black haired chief' (or similar), and it is claimed that the clan were the poets and bards to the leading clans of the counties Leitrim, Roscommon, and Longford. Their principle place of residence was the village of Kilronan, County Roscommon, where they were the 'erenaghs'. This was a hereditary position and can be described as the keepers of the church lands, and collectors of tithes. It is also claimed that the clan maintained a school of bards at Castle Fore, Leitrim, where they were resident in 1636, Peregrine O'Duigenan who died in 1664 being one of the Four Masters. Many of the clan served in King James 11's Catholic Army of 1690 which failed to defeat William 111 of Orange and England at the battle of the Boyne. In consequence the clan was dispossessed of its lands, the prefix O' was also dropped after the defeat, and in this case it has never been replaced.

Why am I telling you all this? Because my old Alma Mater, Lacken National School is now a community centre and Pat Dignam, a Dublin man who lived in the area for many years , contributed more in time and energy to the community than anybody else. Pat passed away suddenly in October 2016. On Thursday 10th April his widow Liz unveiled a plaque to Pat on the gable wall of the community centre. At the unveiling it was said “Pat was a man who got things done.” He had a knack of cutting through red tape and I’m sure he often mused on the words of Voltaire, “It is dangerous to be right when those in authority, who make the decisions are wrong.”ur community centre is taking shape but we are still badly in need of funds. The Lacken diaspora can contact us at: lackencomdev@gmail.com

Listowel Writers’ Week 2018 was scheduled to be opened by Nuala Ni Dhomhnaill, one of the most prominent poets writing in the Irish language, however due to illness Nuala was unable to open Listowel Writers' Week. It was opened instead by American poet Billy Collins. The John B. Keane Lifetime achievement award was presented to Dame Edna O Brien, DBE. And the presentation of prizes for the literary competitions were presented on the opening night. This is the 47th Listowel Writers’ Week and, in the words of the chairperson it is, “ . . a cornucopia of events celebrating our shared love of literature.” It’s only starting as I write and there are a number of hectic days ahead. Drama, poetry readings, open-mic sessions, book launches and much more. (So far I have counted sixty nine events, not counting the fringe shows.) It is the time of year when the literary heavyweights of the world converge on the north Kerry market town; the literary capital of Europe. I’ll tell you all about it in July.

Last month I told you about Jess Kidd’s latest book The Hoarder. Well having fully digested it I’m fully convinced that I am definitely a hoarder but the jury, in my head , is still out on whether there is such a thing as reincarnation. But, just in case, I have picked out a tombstone for myself.


Our referendum to repeal the Eight Amendment of the Irish Constitution resulted in a win for the “Yes” side on May 25th. I won’t comment on the result but the following was written, many years ago, by my old friend Dan Keane who is no longer with us.

THE PLEA OF THE UNBORN.
By Dan Keane
No human voice is mine to crave
The love, the life, that is my due,
I bear a soul that Heaven gave
And I am human, just like you.
A gift bestowed by hands divine:
To pro-create and fill the earth
And oh, dear Mom, what right is thine
To kill me on the road to birth?
Thou wert begotten just like me:-
A treasure in your Mother’s womb.
Is my pre-natal sanctuary
By vile decrees to be my tomb?
A tomb compelled to cast aside
My corpse, in fragments dripping blood;
When some satanic act defied
The sanctity of motherhood.
Why cavil with a simple phrase
What other name does murder know?
And you who would my fears erase
Your faith, in deeds I beg you show.
Then seal the door ‘gainst Satan’s plans
And God your future days shall bless,
I live in fear of murderous hand
Please, please, oh please say yes.
©2000 Dan Keane 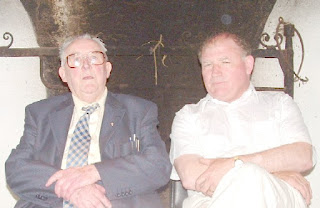