My late mother became visually impaired when I was a child. So, from an early age I was aware of the hardships of a person who was deprived of the gift of sight. During decades working in public transport I witness, almost on a daily basis, the value of the Guide-dog to those who live in a world of darkness. So it’s wonderful to see that Irish Guide Dogs will receive most of the proceeds from sales of a CD which has been brought out by an Irish sporting legend. Who is he?
If I said “Swindon Town”, “Dundalk FC” and “Portsmouth FC” you’d have a fair idea. And if I threw in “Shelbourne FC” or “Limerick United” you probably wouldn’t need to phone a friend but if I said “twenty caps for Ireland” (even without mentioning “Irish National Team Manager” or “1980 Soccer Writers’ Association of Ireland Personality of the Year Award”) you’d know I was talking about Eoin Hand.
You are all well aware of Eoin’s prowess in places as far apart as Limerick, South Africa and Saudi Arabia but have you heard him sing?


His CD was launched by Jimmy Magee in Dublin's oldest pub "The Brazen Head". (Both Robert Emmet and Thomas Moore stayed there.) The pub holds special memories for Eoin as he was born there in 1946. His mother, Monica, ran the pub in the 1930s and '40s. She died in May this year and Eoin recorded “After the Ball” in her memory . It was recorded live in John B Keane's pub in Listowel. It’s produced by another legend, singer/songwriter and Fermanagh man exiled in Kerry, Mickey McConnell.

Eoin says, “My mother had asked through Pauline, my wife, if he could make up a collection featuring me singing some of her favourite songs. This lead to a very enjoyable live recording and sparked the idea to release it to the public for charity.”
The album has fourteen tracks, twelve songs, and two of Eoin’s own recollections “Lessons Along the Way” and “Reminiscences,”in which he proves his love for his mother, his natural talent as a storyteller and his capacity to forgive, (even the “bastard” who de-tuned his banjo on the night of his stage debut when he was twelve years of age.)
Brendan Behan once said that he was a drinker with a writing problem. Well, Eoin Hand is a singer/raconteur who happened to play football. Listening to this born storyteller I couldn’t help wondering if he was still Ireland manager at the time of the “hand-of-frog” would he have had a more colourful comment than Mr. Trapattoni?
Apart from the vocal and instrumental talent the inside sleeve is a collector’s piece. We are treated to a gallery of photographs of Eoin in the company of fellow-celebrities such as Jackie Charleton, Ron Greenwood, the late Luke Kelly and George Best. Eoin (who is not at all impressed by Wikipedia’s revelation that his full name is, Eoin Kevin Joseph Colin Hand) is lavish in his praise of Jim Gornall, Wayne Tarran, David O’ Brien, John O’Brien, Gabriel Fitzmaurice, Richard Casey and others involved in this very worthy project.
Eoin is now living in Moyvane, Co.Kerry and Paddy Coyle, Regional Development Manager (North East), Irish Guide Dogs for the Blind, told me, “Eoin has allocated a supply of CDs to St. John's Arts Centre, Listowel, which will be sold locally, for their benefit. All other sales nationwide are for the benefit of Irish Guide Dogs for the Blind.” (On 24th November there was a “Kerry launch” in Saint John’s Art Centre, Listowel, with “The Bomber” Liston and the Sam Maguire Cup in attendance.)

Eoin with Joe Murphy at the "Kerry launch."

Irish Guide Dogs for the Blind relies almost exclusively on voluntary activity and donations for the bulk of its income. Today, 15% of its annual income comes from statutory agencies with the remainder from fundraising activities and donation. Currently, there are 171 working guide dogs in Ireland.
In 2008, work commenced on the €4,5 million redevelopment of the Headquarters in Model Farm Road and Training Centre aimed at increasing the organisation’s capacity to provide services to an increased number of clients. All their services are provided free of charge and they rely heavily on volunteers to support them through fund raising, the raising of dogs, and in many other ways.
They need your help and you are wondering what to get that special person for Christmas. Why not give them a “Hand.” 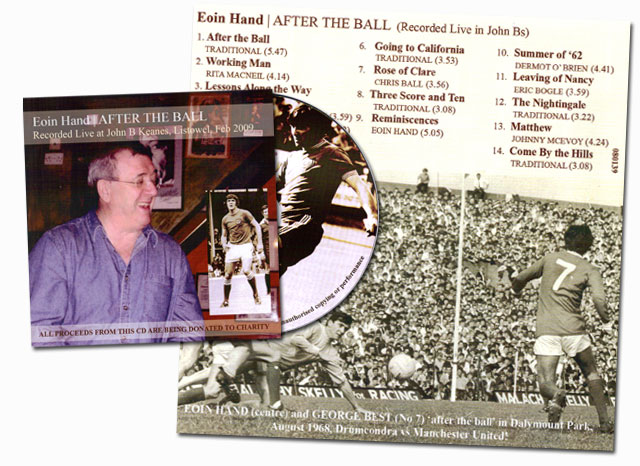