The famous British author and social reformer, Charles Dickens (1812-1870) wanted to be remembered by the books he had written, and not by statues.

So he would not have been worried when vandals 40 years ago removed a marble statue showing him holding a quill and a scroll of paper, from an honored position in Sydney's Centennial Park.

The statue was recently exhumed from the backyard of a house in the Blue Mountains, an hour's drive west from Sydney.

It has now been restored to its original position in Centennial Park.

The only other life-sized statue of Dickens (whose books are still popaular in many countries) is in the U.S. -- in Clark Park, West Philadelphia (aptly named the city of brotherly love).

American sculptor Frank Elwell designed and cast a beautiful grouping of Dickens and Little Nell. In his home country, a monument to Dickens will be erected in Portsmouth to be featured in next year's celebrations to mark the 200th anniversary of the great author’s birth.

See Below: Sydney's life size statue of Charles Dickens, one of only two in the world. Photo: EPA 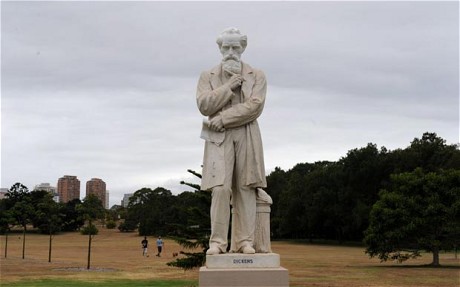