The four penny coffin (also referred to as a coffin house) is a Victorian term that described one of the first homeless shelters to be created for the people of central London. It was operated by the Salvation Army during the late 19th and early 20th centuries to provide comfort and aid to its destitute clients. If you think that attic-flat in Ranelagh or the MRI scanner were claustrophobic or the ‘geki-sema share houses’ in Tokyo, Japan, which are so tiny that they don’t have room for anything excepting for sleeping , think again. Have you ever slept in a coffin?

Apart from vampire and goths very few people have a desire to sleep in an actual coffin. When George Ryan was doing research for his book Vexed at his Own Funeral he spent a night sleeping in a coffin in a Dublin funeral parlour. The funeral director claimed that he didn’t ask for permission but George assured me that he did. “ . . .I was generously granted permission to lie for an hour and a half in a coffin, in Clonsilla, on my own, and the light off. I spent most of the time wondering who’d be the next to enter that coffin.”

For the past 23 years, Brazilian Zeli Ferreira Rossi, 61, has been going to sleep, every Friday night, not to his bed, but straight into a real coffin. This unusual exercise is in memory of a friend of his who died.

One “coffin-sleeper” had this to say, “ . . .if I ever met the right woman, we'd probably construct a two-person coffin shaped bed for ourselves. Complete with a removable lid.”

I read the following in the Nigerian Tribune (I don’t confine my reading to the Wicklow People.); “Coffins are never intended to be just another items of relaxation like sofas or even beds. But some people do not see them like that. Coffins, to them, are just items of wood and it does not matter at all if the tired takes a nap in them. Whether they are called coffins (their original name) or caskets (originally a box for jewellery), these boxes for the dead, to those who make them, are cool means of livelihood, as well as for rest, while waiting for customers. ”

There are some provincial temples in Thailand, such as this one at Nakhon Nayok that specialize in the coffin ceremony with Buddhist monks providing the blessings. For a fee of around 200 Baht (a merit-making donation to the temple) participants lay in the coffin holding flowers. The lid is then shut as the monks chant death rites. Just over a minute later as the monks chant about new life, the coffin is opened and the participants are ‘reborn’ leaving behind their bad karma. If, in future years, the participant endures a spell of bad luck or misfortune, they may again opt for the coffin ceremony to bring about a reversal in their luck.

When Mark Twain was living in London in 1909 his cousin Dr. Jim Clemens , who also lived in London died. The media of the day took it to be Mark Twain and published, what it assumed to be , suitable obituaries. Mark Twain was amused and went to the morgue and declared afterwards, “The moment I saw the corpse I knew it wasn’t me . . .”

Now, that's enough about coffins, death and dying. I'm at Listowel Writers' Week among such celebs as Ann Enright, Graham Norton, Patsy McDermott and P. J. Kennedy. I'll give you full run-down next month including an account of "The Healing Session." It has been held for the past 22 years In John B. Keanes. (see pic below) It is the biggest open-mike session in Europe (if not in the world.)

Click on author's byline for bio and list of other works published by Pencil Stubs Online.
Below: Seen at Listowel Writers' Week 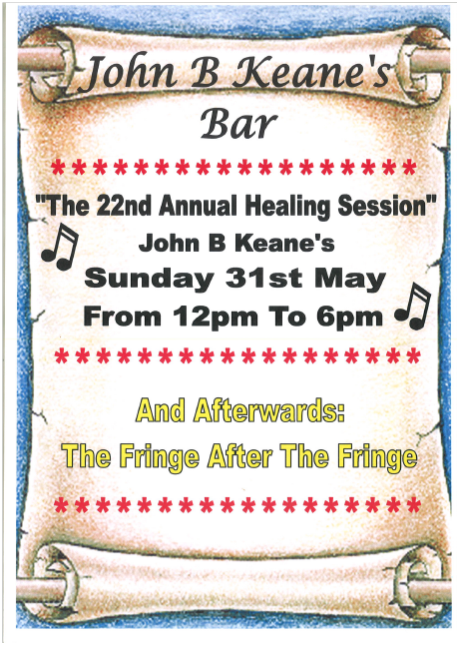