I promised you in June that I would give you an update on Listowel Writers’ Week, the greatest literary festival in Europe if not the world.
Well, where do I start?

It was opened, to a packed house at the Listowel Arms by Ireland’s Inaugural Laureate for Irish Fiction, Ann Enright. Prizes were presented for categories too numerous to mention.

Reading by such literary celebs as Christine Dwyer Hickey, (see above) Colm Toibin and Paul Durcan was an education in itself. Shows such as Celebrating Yeats 150 were not to be missed. Lunchtime drama was top rate. A couple of shows stood out.


And the highlight of the evening theatre was John B. Keane’s The Year of the Hiker. The Open Door Theatre Company certainly did justice to the great Keane. Space doesn’t allow me to even touch lightly on the contributions of singer/songwriter, Declan O Rourke, Gabriel Fitzmaurice, Danny O Mahoney, Diarmeid Ferriter and Michael Murphy.

It rains, even in Kerry during Writers’ Week, and along with 749 others I got wet going to see Rick O Shea’s interview with Graham Norton. The multi-talented Graham too the audience on a step-by-step account of his latest autobiographical work The Life and Loves of a He devil. It was well worth Getting soaked to the skin to attend.

The grand finale the, 22nd Healing Session in John B. Keane’s, on the Sunday was everything that one could expect as far as talent is concerned. Poets, singers and performers of all sorts were in attendance. And the host, Billy Keane was at his best. Kerry is the second most beautiful county in Ireland. Speaking of which; It’s 75 years since the sluice-gate at Poulaphuca was lowered to flood the valleys to make what is now the beautiful Blessington Lakes, in County Wicklow. Between 1938 and 1940, 76 houses were demolished, and the bridges at Humphreystown, Baltyboys and Burgage blown up, in anticipation of the flooding by the Liffey Hydro-Electric Scheme.


But not everybody was pleased. I told you some time ago about my own father’s approach. When the price offered for the land, by the ESB, was flatly refused by indignant landowners it went to Arbitration; the democracy of which Tim Lennon was not convinced. Years later, in a radio interview, he said, “The arbitrator was the Devil and the coort was in hell.” And now a local man has dug, from the archives, a notice of a public meeting in Valleymount, in 1936, where those affected would defend their interests. 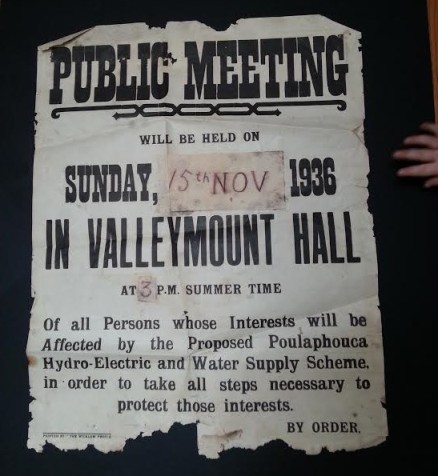 Not everyone was pleased


The reservoir is sometimes known as "lakes" due to its shape, which arises because it lies in not one but two river valleys - that of the Liffey and, primarily, that of the King River. The King's River joined the Liffey at Inchiclare, at which point the King’s River was the larger flow, and when the Liffey was dammed downstream of the confluence, A ridge of land, on which the village of Valleymount lies, divides the “lakes”. The people are Valleymount haven’t forgotten and as part of the annual Hillbilly Festival a commemorative event was held in Valleymount on Friday 26th June. Christiaan Corlett gave a very informative talk. Christiaan is editor of Beneath the Poulaphuca Reservoir. This tome is taken from a comprehensive pre-flooding survey which was carried out in 1939. It is available from Government Publications, 51 Saint Stephens Green Dublin2. Price €35.

Irish TV 191 came out and interviewed Dick Byrne and Harry Farrington and singer/songwriter Batt Kinane played his new song Ballinahown at Humphreystown Bridge. Batt is including it on his next album due out later this year.


Francis Duffy introduced the acts and was compere for the evening giving some historical background. The Hill family played some trad tunes on Bodhran and flute. Then the play started at 9pm. The Mary Byrne school of dancing and Laura Foster did some Sean Nos dancing. Batt Kinane then played six of his local ballads and told the stories behind them and after that a 15 minute video was played on a projector that Batt put together with footage of Boden Well from 1978 and photos from Chris Corellets book.

The Flood of the Forties, a play, about the “flooding” written by John Holmes and George Guing and directed by Maria Murphy was staged. It proved to be very moving and brought back mixed memories to many older members of the audience. This also was recorded by Irish TV.


And of course the 11th annual Hillbilly Tractor Run- for charity- was, once again, a roaring success. With all the usual terminology to be heard, “Crawlers” “Rippers” and “Drawbars” were discussed at length. “Cock-lifters” were in plentiful supply and you can bet there were a few “Fast-hitches”. And as for “Grousers” sure there’s no scarcity of them around here.


The documentary/DVD on Irish Famine Pots is almost complete and will be on sale before the end of the month.
Details from:
Irish Famine Pots
Contact: irishfaminepots@gmail.com 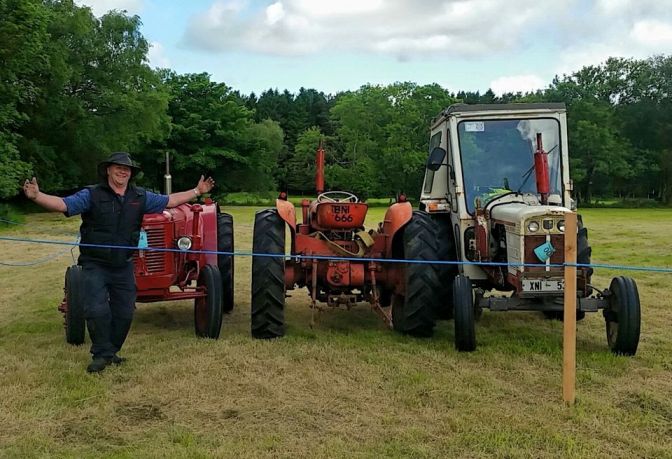