“There’s a book in everyone. It’s not always necessary to publish it and if you can’t write it yourself, you should let it be drawn out of you by somebody. Afterwards, the world will have a fuller understanding of you and many things about you will be explained in a way that is not possible by expiring silently with the whole secret of your life locked up within you and the whole complicated and monumental tale on its way to total decay, for bones don’t speak and the dust is also silent.” (John B. Keane.)

One night, sixty years ago, 30 year old John B. Keane went, with his wife Mary, to the Listowel Drama Group’s production of All Souls Night by Joseph Tomelty. On the way home he said to Mary, “I could write as good a play as that.” On arriving home he reached for his favourite Biro. By 6.30 next mornings, as dawn was breaking over Gurtenard wood, he had completed Scene One of Sive. (The idea for the play came to him some time previously when he had an experience as a haggard old man entered the bar, ordered a drink, and told everybody in earshot that a match had been made for him and that he would be getting married soon. He asked John B. to accompany him to the jewellers to choose a ring for his new bride. The ever-obliging young publican, who through no fault of his own was not in possession of all the facts, went with him. Months later John B. learned that the old man had married a very young girl who had since had a nervous breakdown and was in an institution. John B’s daughter Joanna says it, "Troubled my father for a long time after.")

A fortnight later he had finished the first draft of Sive. He showed it to a few close friends and, as if with one voice, they told him that it wouldn’t work. He was given different reasons by different people; the names of the characters were ridicules. The theme was outgrown. The language was too flowery. He re-wrote it and submitted it to the Abbey Theatre. The script was returned to him without any comment. It was first staged by the Listowel Drama Group in Walshe’s Ballroom, Listowel on February 02nd 1959. They later put it on in the Abbey Theatre for one week. (When the Abbey Company eventually produced the play in 1985 John B. said,” They got the harshness, the bitterness, the poverty of the period . . . At long last a few elderly and semi-elderly playwrights are getting *Cothrom na Feinne “)

There was an Off-Broadway production but John B. was probably more impressed when the Listowel Drama Group won the All Ireland Drama Final in Athlone with it. When the group was touring north Kerry with the play the playwright was playing Carthalawn, the singing tinker. He gave an unforgettable performance in Ballylongford. One unscripted scene drew mixed reaction from the audience. As the slender John B. was about to exit at the end of Act two his borrowed trousers, which were several sizes too big for him, headed towards Australia. Despite frantic, whispered, instructions to “get off ye eejit” he stood his ground and sang an additional verse of the theme-song with his trousers around his ankles.

John B. once wrote, “Whatever chance a writer has of getting a good review in the London Times or the Herald Tribune he has no chance at all in a provincial paper.” He was on the ball at the time but the provincial press has for many decades been forced to change its mind. 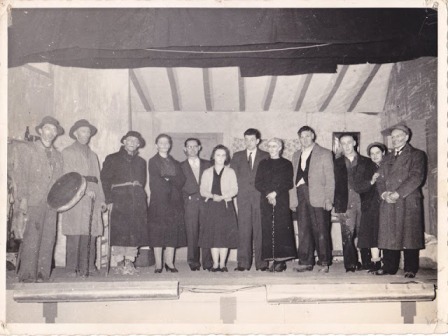 
Sive has been playing to packed houses at the Gaiety Theatre since 26th January. The current run is due to finish on 03rd March. In the original script the two tinker characters are a father and son. In this Druid production they are a mother and daughter. A couple of reviewers, who can’t ever be pleased with any play, have been critical with this gender change. But in my humble opinion it certainly doesn’t take from the drama.

Sive tells a story lust, greed conniving and deceit. John B. always had his finger on the pulse of human nature and used his native Kerry as a blackboard to explain universal emotions and especially the role of women in society. Every character in Sive is a complex individual who displays all the emotions to which the human race is heir. It has long won a place in the country’s literary history, cited in The Irish Times’ ‘Modern Ireland in 100 Artworks’ in 2015. The play has stood the test of time over the decades and has remained popular with amateur and professional drama groups and it would be hard to find a parish hall in Ireland where it hasn’t been staged. The time-proof dialogue is still relevant after almost sixty years; like when Mike Glavin points out to his mother that it is very difficult to be a good son and a good husband, “under the one roof.” Everything about this production is first class. Thanks to the digital revolution in the theatre, which some call “tecnodrama” as a sort of mixed compliment, a computer-generated scene in the final act transports the audience to the bog hole so central to the plot.

In 1964 Listowel’s favourite son wrote, ”I am a kind of writer. Nobody knows what kind of writer I am, least of all myself. My ambition is that people will say, ‘He was a kind of writer. He said things a different way from others’ ”. In the past fifty-four years that modest ambition has been realised many, many, times.
John B’s son Billy, a literary giant in his own right, who was a nominee for the Kerry Person of the Year 2018, put out a call on RTE radio asking any actress, amateur or professional, who played Sive at any time in the last fifty-nine years to make contact. This search for Sives resulted in an assembly of 50 “Sives” in the Gaiety Theatre on Sunday 11th February. They ranged in ages from . . . Well! This national gathering of Sives met each other over a cup of tea in the John B. Bar and had a group photograph taken on the Gaiety stage. The group included Margaret Ward (pic below courtesy of Nick Bradshaw) who played Sive in that very first production and Gráinne Good who plays the role in the Druid’s latest production. 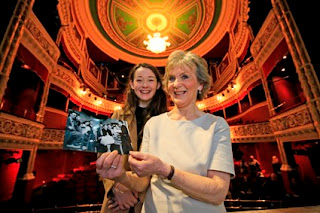 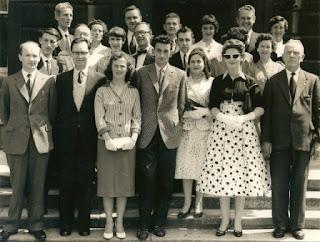 Close up pic of 1959 guests of Dan Moloney for Sive held by Margaret Ward in previous pic . 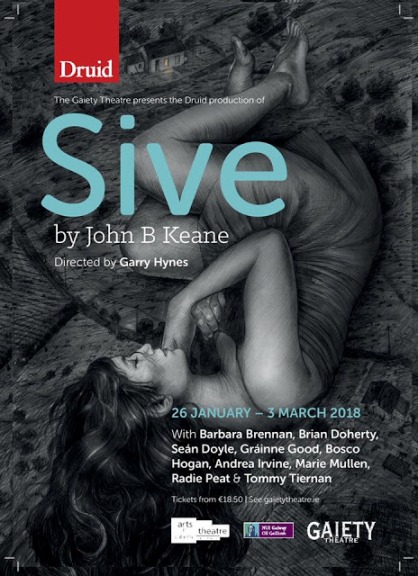