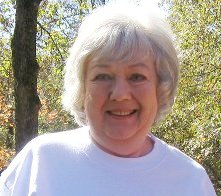 
A part of my heart will always be in the Ozarks. I grew up in a small community during a period the Charles Dickens would describe as “it was the best of times; it was the worst of times”. Born just prior to the onset of World War II, a terrible era, it was also a time of recovery from the Depression, patriotism and hope.

When first meeting someone new in the community, a child or stranger is asked “Who are your people?” The answer is a shortcut to establishing a basis for acquaintance. My answer was “I am Bill Carnell’s girl.” Everyone knew Daddy, the County Superintendent of Schools. All that was needed; I belonged.

McDonald County, Missouri is my little corner of the world. Nestled in the southwest borders of the state, it touches on Arkansas and Oklahoma and is a stone’s throw from Kansas. If the US had a belly button, it would be located there. It is separated from Arkansas by the extension of the Mason-Dixon Line. Oklahoma lies to the west. Until 1908 Oklahoma was wild and wooly Indian Territory. Consequently, McDonald County was a little wooly, too. Located two hundred miles due south of Kansas City with both Western and Northern influences, it is still primarily mid-South culture. Very similar to Appalachia with touches of the Deep South. To the east are the more rugged parts of the crumpled Ozark Mountains – still mostly sparsely occupied woodlands. This collision of cultures, ethnicity and a tendency toward caution about anything new or foreign makes it and its people unique in so many ways. Far from the early highways of America, the Mississippi, the Ohio, the Missouri and Arkansas Rivers, it was not among the earliest settlements in the Americas. Instead it was largely populated by people who had migrated over a period of 200 years or so from the middle and deep south. The dominant culture was a blend of Scots-Irish Appalachia and the gentry of the south, with a significant, but unmentioned link to Native American influences.

In the past, its proximity to Indian Territory attracted some less desirable residents. If there was likely to be a repercussion after a bank robbery or murder, it was a short distance to “The Territory” and freedom. There was a sprinkling of other immigrants – French, German, Slavic origins, but not enough to make much difference. Until very recently it was almost 100% WASP. For nearly 100 years, there were no blacks. There was a county ordinance that no black could be in the county after sundown. It was enforced into the 1960’s. The steep, rocky hills were never an area that favored the formation of plantations. In 1860 there were 50 slaves listed in the census; after the War, blacks were not welcome. I knew only WASP’s until I went to college. As a freshman, I politely told a Catholic girl that she had a smudge on her forehead. It was Palm Sunday. She set me straight and I was embarrassed.

Isolated from the rest of the world until the First World War, residents relied on kinship and friendship to survive. Strangers, known as “furriners” were viewed with great skepticism. Who knew what kind of new-fangled ideas they might have and upset the balance of the well known way of life. Oh, there were differences.In the 1860 Presidential election only three of the four candidates were on the ballot. Stephen Douglas and Abraham Lincoln from Illinois favored the North and John Bell from Tennessee the South. John C. Breckenridge of Kentucky wasn’t on the ballot, even though he carried the South, winning 11 states. Lincoln won 18 Northern states and the election even though the difference between the number of votes cast for him and Douglas was less than 500,000. Douglas won only one state – Missouri. In McDonald County, Douglas and Bell each got about 350 votes and Lincoln got three. Only two men ever admitted that they voted for Lincoln; the third one never confessed. This obviously clear schism of beliefs made the county particularly vulnerable to the horrors of war – brother fighting against brother or in some cases, a rebel hiding a friend who was a Union soldier to save his life. The armies of the North and South marched back and forth over the land until it was a wasteland. At the end of the war only eight adults lived in the county. An octet of very strong women and their children.

These factors all contributed to the need for an all-important question of strangers – who are your people? After all, it was essential to learn if this person fit into the known hierarchy of the community. My standard answer: “I’m Bill Carnell’s girl” quickly established that I was from a well-known family in the county and kin to many people since both branches of my family were long time residents. It would be was easy to identify my place in the world. Foreigners found the intricate relationships confusing.

First was “blood” kin. Those whose combined DNA was shared openly to the community. A young person had to be familiar with the complex blood lines as the gene pool was closer to a gene puddle. Of course, there were a few woods colts or illegitimate children, but that was something ignored publicly and a source of secret shame. (In recent years, the county is among the Missouri counties with the most unmarried mothers, so attitudes have clearly changed.)

Aunts and Uncles by marriage were considered close kin as their spouse and children were blood kin, but beyond that, their family members were “shirt-tail” relatives. People, that might or might not be, closely aligned to the central family or clan.

Then there were the honorary kin - older people who were addressed as Aunt or Uncle or Granny as an honorific and notice of respect. Sir and Ma’am were drilled into children and were considered polite. I was shocked to find in other parts of the country, women especially would take offense thinking I was regarding them as old.

Of course, family connections weren’t the only source of confusion. Most people went by their first and middle names – thus there were many Bobby Joes, Mary Sues and Carol Anns. In addition, friends, enemies and relatives were generous in assigning nicknames. Often more than one nickname was to the same person. This led to the impression that there were a lot more people living there than the census would indicate. Sometimes the names were self-assigned. My father’s legal name was Thomas Alton Carnell. He decided to call himself Bill as a child, probably to distinguish himself from his father, Thomas Jefferson Carnell. This is only a small sample of the issue.

Nicknames could be brutally direct. Among our neighbors were Scar, Hook, and Duck.. That was in only one block of town. Other nicknames were more benign. I once laughed because a good friend mentioned an Uncle Brother; then I realized I had an Uncle Son. I also had an Uncle Shorty and an Uncle Doc. As I child, I had no idea what their real names were.

Growing up in a small, tight knit community meant that there were few secrets, but at the same time there was a strong ethic of not “airing dirty laundry” within the family. This conflict led to a powerful grapevine communication network. We children were well aware that if we got into trouble at one end of town, someone would have told our folks about it before we could get home. This probably kept truancy to a minimum. My hometown, Pineville, was the county seat. Most county officials lived in town, our teachers, preachers and business owners were residents. Every adult knew every child in town. There was always a watchful eye and a loose tongue.

My people were not just those kin in some way. The important thing is that all residents were “my people” and I love them.

Some of them made an impression or influenced me. Some were just plain strange, even to me. Others were the source of stories that could hardly be believed. There were two couples who decided that they wanted to exchange partners. One couple was childless and the other had a baby. After much discussion, they concluded that in order to make it a fair trade, the childless couple had to throw in a calf to boot. Another pair made an even trade, but one man returned his new wife. She wasn’t satisfactory.

Like most families, mine was a mixture of saints and sinners. Let’s say moonshine production was not a mysterious night-time gleam through the woods to some of my relatives. Although little moonshine is made today, it was once a booming business and remained so well into the 1960’s as both Arkansas and Oklahoma were dry states. I knew there was a stump where you could leave your money and return later to pick up some fine ‘shine. The Pineville Cemetery had a cast metal tombstone with a back that could be unscrewed revealing a nice-size space for goods.

At one point a liquor distributor in nearby Joplin, Missouri was the largest in the US. Thanks to those nearby markets. North Carolinians developed stock car racing with skills honed by fast driving to elude the “revenooers”. Auto racing is very popular in Southwest Missouri, could there possibly be a connection?

In 1980 I worked for my cousin Gene for a year. I will share more about him later, but this story ties in. Gene was a realtor and bail bondsman. This led to some interesting clients. He bonded out the hookers from a nearby brothel that had operated for years under the radar. It wasn’t prostitution that caused trouble, however; it was booze. The owner made the mistake of serving liquor without a license to some Federal agents. Even let them charge their drinks on a credit card. The hookers were collateral damage. I spent an interesting afternoon chatting with the girls and learning more about their trade.

Returning to McDonald County after an absence of many years, a cousin told me that I had “been gone so long, you are almost a foreigner.” My long time away led me to make a very serious mistake. I met a nice friendly woman and failed to ask the essential question. She seemed pleasant and interested in talking with me. She encouraged me to tell her all about a man who had mistreated my sister in her job. I told her what I thought about him in no uncertain terms; only then did she reveal the villain was her brother-in-law. I was very embarrassed and apologetic. But it taught me to appreciate the wisdom of the “old ways”. I never again failed to ask “Who are your people?” before entering into a conversation with a stranger.