The Pope, Garfield And Scumbags And Handbags


I have Garfield slippers, Garfield key-fobs, Garfield pictures and Garfield mugs. The house is full of soft Garfield’s; I have one on the dash of the car and a mini- Garfield hanging from the interior mirror. This is the first year that, through my own fault, I was unable to get a Garfield desk-calendar. I am a dedicated Garfield fan and at age 72 it’s not worth my while changing.


According to legend there was a curse put on the Mayo Gaelic football team in 1951. Apparently the team, having won the all-Ireland Final, who were travelling in the back of a truck, passed a funeral in the town of Foxford without paying their respects and stopping.
The curse was then put on them that they would not win an All-Ireland again until every member of that team was dead. It is believed a priest or a woman put the curse on them. Will the curse now be lifted On the Pope’s recent visit to Knock Mayo supporter Audrey Elliot handed him a Mayo jersey which . . HE SIGNED. 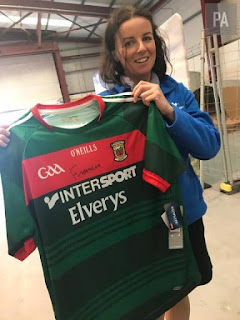 And speaking of Gaelic football, Dublin is once again set to grace the hallowed ground of Croke Park on September 02nd, as firm favourites to win the All-Ireland Gaelic Football. And I have just read Scumbags and Handbags, a hilarious novel, by Dublin author Sinead Hamill. A Dublin scumbag gets sentenced to community service in a Gaelic football club where he and an ex footballing legend combine to train a gang of overweight, unfit, pelvic floor leaking mammies to play football. When the team inadvertently get caught up in a massive drugs heist that goes wrong, a deranged criminal is out for revenge. Two men, worlds apart, collide in this hilarious romp through ladies Gaelic football. Dublin toe rag Robbie King gets sentenced to community service at an affluent Gaelic football club, his politically incorrect gob takes a lot of getting used to. Tommy Boylan was the greatest Gaelic footballer to come out of Dublin. A moment of madness twenty years ago destroyed his career. Now he's back and yearning for acceptance, he agrees to take on the job no-one wants. To train a bunch of unfit, overweight, pelvic floor leaking mammies to play football.
But there's a problem: The Hawk, a deranged criminal and Robbie's real boss. When Robbie makes a mistake the Gaelic for Mothers team find themselves caught up in the middle of a five million euro cocaine haul. The Hawk is out for revenge and will stop at nothing to get it.
Sinead Hamill lives in Dublin with her husband and two children. She is also the creator of "Get your ditties out", a blog which offers her unique observations of everyday Irish life and other humorous situations.

Her inspiration for this entertaining and well-written work? ”The famous Askeaton rooster who denied me so much sleep.” You’ll find out more when you are laughing your way through the thirty-nine chapters.
A brilliant read, a laugh a minute. Info at Blog at sineadhamell.com
See you in October