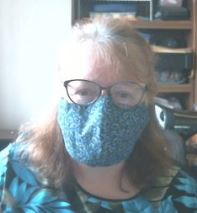 Snippet #1: I was watching an episode of Tony Bourdain’s, “No Reservations”. You can catch episodes on the Travel Channel. This is the one where he and a bunch of his chef friends do up a big holiday dinner. I haven’t finished watching the show but I wanted to relay the conversation I had with Tony just now.

I really, really like Tony Bourdain. I can’t say liked even though he is dead because I can still talk to him. So, we are chatting back and forth during the show, and he said to me, “You really like this don’t you?” I said, “What? He said, “Talking to dead guys.” I said, “Yes. In fact, that’s a really good name for a website. I’d better write that down or I’m not going to remember it.” Hence, the Facebook post where this story originally appeared.

I decided I'd like to use a photo to go with the article. Looking through Google Images there were lots of pictures, but Anthony asked me to find a younger one of him. So, this is Anthony Bourdain at 24 years old per his request.

Actually, he probably looks like that now. I remember Sylvia Browne said when folks died they ended up looking like they did in the prime of their life. I can probably look forward to being a size 12 in the afterlife.

Snippet #2: This story happened about four years ago. I had turned over a new leaf and that week ended up eating more fruit than I normally did. I also got a really bad case of gas. My husband always quotes his mother who used to say, “Better out than in.” I commented to my guide Seth, “That’s a good thing. Right?” He said, “Not if someone is standing behind you.”

Snippet #3: I hadn’t made much headway on this article. You’d think it would be easy with me being able to talk to dead guys wherever and whenever, but I’d hit a stump. It was like so many different people to choose from I couldn’t go wrong, but I also wanted to do right. Other than being encouraged with an easy choice of watching a television show and going from there I was stumped. I hadn’t yet gotten to the point where I could speak with any sort of authority about lucid dreaming (hopefully, next month’s article) so I turned to YouTube.

I had semi-settled on Robin Williams, who I still would like to speak with when I remembered Tarzan. And, that felt right. When I was a little girl all of us kids would watch the Tarzan movies that were shown on television on the weekends. Sometimes we even went to the movies, but the one Tarzan who captured my imagination was Johnny Weissmuller. I thought to myself what I remembered about him was that he was a kind man. I began to Google him and found a clip with a computerized voice that talked about how low he fell before he passed in 1984. I remember thinking that wasn’t right. Nobody falls so low they make a failure out of themselves ever. I just don’t believe in failure. There can certainly be changes in circumstances throughout somebody’s life, but failure? No. Would this information color my story? No, I believed then and believe now in the goodness that was Johnny Weissmuller.

His father started out in the coal mines of Pennsylvania, same as my husband Dennis’ grandfathers. In the articles I read, Johnny and his brother Peter lifted themselves out of the terrible future of dying of black lung disease in those coal mines by swimming. They were both in the Olympics and walked away with the gold. At least, Johnny did. I think Peter was also an extraordinary swimmer too, I mean you’d have to to be in the Olympics, right? In fact, I read that the two of them rescued 11 people when a tour boat capsized on Lake Michigan.

He was the 12th Tarzan, but for me, he was the best. So, yesterday I did all this reading so as to not appear ignorant. Actually, it made it worse because now I was double star struck.

This morning when I awakened I reached out to him to strike up a conversation. Whether I was going to put it in this article remained to be seen, and the way I was thinking it was going to all remain in the area of research. But, something changed my mind.

We got to talking about something else. I was thinking about past lives at the time. I asked Johnny Weissmuller how it was that I had no trouble at all talking to dead guys when other mediums did not do it. As far as I could see they would contact people’s relatives or, in some cases, their pet animals. I mean, I do that too, but mostly I seem to amuse myself talking to people known to me through film, television, or books. I don’t generally step far out of the closet to do this, with the exception of articles like this.

“Yes, hello to you too. You’re never going to get anywhere meandering around about the point.”

“It’s like being a wallflower at a dance. You haven’t stepped away from the punch bowl yet.”

“That’s one thing about speaking with Spirit. They can see right through you. Ha. That’s a good ghost joke!”

“That was sort of funny. Okay, so I’ll relax and you can talk about what we talked about.”

“Yes, Pauline was wondering how it is she so easily reaches out to speak with Spirit when others aren’t able to or just don’t talk about it. I told her that was what she was good at. She has no fear. It is the same as when I was swimming. I had no fear about it.

She asked me if I had incarnated yet. Then, she wondered before I even had an opportunity to answer how it was that if I had incarnated that she was talking to me at the same time? She was ready to throw up her hands in disgust once again wondering if she had made everything up in her head when I said to her that it was possible to be reincarnated and still be available in Spirit form to speak to mediums.

This proceeded to blow her mind.”

Oh, come on. It did. You wondered why your guide Seth had never talked to you about it. I said past lives is in your DNA as a person. You carry all of those lives with you, and yet those same personas are still in Heaven, or in the Great Beyond, or however you think of the lives between lives.”

Yes, that’s what really got me. I did wonder why my teacher, my guide, my Seth had never broached this idea with me before and that’s when I realized that people between lives are also our teachers. So, I think that was really something to think about.

In any case, the point of these interviews in this article is to illustrate just how it is to talk to Spirit and how normal it can seem. I suppose it could get really bizarre, like I could tell you how it is to talk to a plant or to an animal, but I don’t have a lot of experience with that. For a future article, I suppose.

I hope you enjoyed this.