Journalist Roisin Ingle is a brilliant wordsmith and she didn’t lick it off the ground. Her 81 year old mother ,Ann, has given us a collection of autobiographical essays which encompass four score years. Openhearted is described as “Eighty years of love, loss, laughter and letting go” which just about sums it up. Honesty, forgiveness, humility and wit jump out from each of its 298 pages. From meeting the man who would become her husband on a roadside in Newquay, Cornwall to intimate details of everything from an illegal abortion at age twenty-one to mastering an electric typewriter was committed to paper in wonderful prose. Born in England Ann takes us through four score years with wit and wisdom. She wrote Openhearted despite failing eyesight. She says, “I was diagnosed with macular degeneration. Judi Dench has it. I felt better when I heard that.”

A Protestant she married Irish Catholic Peter Ingle in England. Her meticulous research has thrown up some lesser known gems. Take the following, “There were probably many women like me who did not realize that after marriage they were the property of their husband and he could use them in any way he wanted, no matter what their religion. The principle was established by St Augustine and brought into law by Sir Matthew Hale in 1736 when he wrote: “But the husband cannot be guilty of rape committed by himself upon his lawful wife, for by their mutual matrimonial consent and contract, the wife hath given herself up in this kind unto her husband which she cannot retract’. It wasn’t until 1191 that this law was changed in the UK and in Ireland at around the same time.”

It must be pointed out that this passage is no reflection on Ann’s own marriage because through good times and bad it was a marriage of love.

We all express puzzlement at how outsiders sometimes have difficulty with our accents. But this wonderful English Protestant woman who joined is sixty years ago has the honesty to admit that she couldn’t make head or tail of what we were saying.

When Peter Ingle, whom she loved dearly, died in the most tragic manner imaginable, after years of mental health issues, Ann’s life went in several different directions; all of them positive. From the battle to be accepted as a student at Trinity College (which she won) to signing up for a Vipassana course at seventy years of age. She tells us that Vipassana means, “To see things as they really are.” She goes on to say that the experience, “. . . led me to believe that I already know what it’s like to be dead.”

In a chapter titled Smelling of Scones imparts some revelations. Such as telling how, in 2003, a journalist daughter (I wonder who could that be!) brought her to Lisdoonvarna Matchmaking Festival, “as a Guinea-pig.” I won’t tell you any more about that chapter; you’ll have to read it for yourself. You won’t be disappointed.

"Openhearted" is published by Sandycove. You will find it difficult to put down.

Original script of Sive discovered and John B. is joined by Brendan.

The attached picture by Tom Fitzgerald illustrates a great story in the Irish Examiner, October 4, 2021.

The man in the front in blue was clearing out an old house in Cork when he came upon the original script of John B’s Sive signed by the author. Karl Harding is a keen John B. Keane aficionado. He and his wife Mar determined that Kerry Writers Museum was the proper place for this treasure. They are pictured above with Cara Trant and members of the Keane family at the hand over.

John B. has now been joined by his friend and fellow Kerry man of many parts on the Celestial stage. Professor Brendan Kennelly, poet, storyteller, broadcaster and true gentleman was buried in his native Ballylongford on Wednesday 20th October.

Brendan was truly a person who could “Walk with kings and beggars an still not lose the common touch.” One day when talking to him I expressed surprise at a particular partnership that I considered mismatched. His reply? " My mother always said that if you were in love with a heap of dung you wouldn't see a rotten straw in it."

Brendan and John B.

He will be sadly missed by those who knew him and those who didn’t. The angelic smile of the Kerryman, who could even forgive Oliver Cromwell, will brighten up Heaven even further. I’m attaching a story that he wrote sixty-five years ago when he was aged twenty.

The people of Listowel don’t need any reminders of the greatness of the Ballylongford man. Nevertheless there is now a mural of one of his quotations on the junction of Church Street and Colbert Street.

Mural of a Brendan Kennelly quotation. Courtest of Mary Cogan.

See you in December. 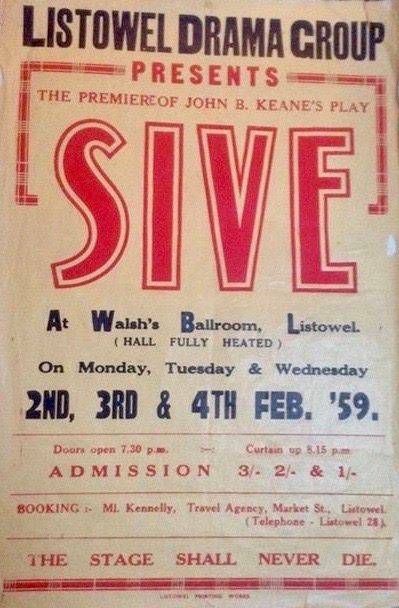