There are so many twists and turns on the path of life and we can never truly know with certainty where life will lead us. I never imagined that one day my life’s path would lead me to China and how my experiences here would profoundly change my life for the better.

I have been living and teaching here for approximately a year now and I have noticed changes in my personality. Positive changes, I am more relaxed, laid back, and I am enjoying the time I spend with my students. I am also learning a great deal about the Chinese culture. In many ways teaching here has become a learning experience for me.

I also discovered shortly after arriving here that there is a great misconception about China due to the western media. I say this because of the many questions thrown my way via emails, text messages, and phone calls from my friends in the States. That is one of the reasons why I enjoy writing about my experiences here because of the western media’s interest about the Chinese culture and their booming economic growth.

A few months ago I was interviewed by the Standard Speaker Newspaper about my working as a teacher in the beautiful city of Suzhou.

Here is the article written by Jill Whalen of the Standard Speaker …….

For Clint Ettinger, moving to China was both "terrifying and exhilarating."

It was a similar experience for Thomas F O'Neill, who couldn't read, write or speak even the simplest Chinese words when he arrived.

Despite the initial shock of a new country, both area men are calling China home. Unemployment rates are low and the economy is booming - reasons that beckoned them and other Americans to the faraway land. In fact, both O'Neill, Shenandoah, and Ettinger, Hazleton, had jobs in line before even setting foot in the Far East.

O'Neill was hired about a year ago by the Suzhou Foreign Language School after a Chinese student there cited something O'Neill had written about cultural diversity in her term paper. The school asked O'Neill if he'd be interested in teaching English for a few semesters.

O'Neill said he wanted to visit China after taking a college course on Asian history and studying philosophy with Chinese students while he was a seminarian in New Jersey in the 1980s.

"In the 1980s, however, it was extremely difficult for an American to enter China due to the Cold War. I have been to India, Malaysia, Ecuador and Australia as a volunteer with the Missionaries of Charity. I worked with Mother Teresa in India as a volunteer but I was unable to enter China," O'Neill said. The job offer came with a work visa that was later replaced with a residential visa.

"I did not know anyone in China when I arrived here," he said in an e-mail. "When I got off the plane I only had $27.38 in my pocket. I lived on that for two weeks until the school advanced me some money."

The language barrier was another problem - and one that opened O'Neill's eyes. "I understand the issues that many immigrants face when they come to America and our ancestors faced the same challenges. However, unlike our ancestors I never experienced prejudice or bigotry here considering the fact that I am a foreigner in this country," he said.

"Their term papers are normally written about various cultures but my students want to learn everything they can about the American culture. I also found that what I am offering my students is part of myself. Our life experiences are part of the lessons of life. We can never lose who we are in the world and who we are can become the greatest gift to others," he said.

O'Neill lives in Suzhou, which is in Jiangsu province. He categorized it as a modern city with many ancient Buddhist temples and palaces - a place that is a favorite with tourists. He lives in an apartment paid for by the school, but said rent for a "nice" apartment in Suzhou would cost less than $300 a month.

"With the one-child policy in effect here, a Chinese couple can raise a child and provide that child with boundless opportunities, the opportunities that many in the Pennsylvania coal region feel are beyond their reach," he said. In the coal region, O'Neill said many depend on welfare or disability checks, and college-aged students are moving away.

"China's economy is a complete contrast because it's booming," he said. The middle class is spending money, causing the economy to grow exponentially. In America, O'Neill sees the middle class shrinking and said people are afraid to spend money due to high unemployment and the uncertain job market.

O'Neill said food in China is very inexpensive, with a large meal at a restaurant costing less than $2. Broadband Internet service, though censored, runs about $100 annually, but "foreigners" like O'Neill are able to bypass the censored version.

A Sony Vaio laptop, which typically costs about $2,000 in the United States, was purchased by O'Neill in China for $765. A Chinese SIM calling card allows him to call the United States for about 10 cents per minute, while a U.S. SIM card for the same call would cost about $1.99 a minute, he explained.

"Everyone in China has to pay taxes. The government uses some of the taxes to subsidize all the various service providers like cellular companies, Internet providers, satellite companies, railways, gas stations, taxi services, airlines, et cetera. They do this to control the rate of inflation and to keep the price of the services low," he said.

O'Neill has met other Americans in China. Some say they moved because of the low cost of living, others say the economy is booming. He's also met retirees from America, and people who have found spouses in the country.

O'Neill's residential visa allows him to stay in China for as long as he wants. "I have no plans right now on moving back to the States but at the same time I would never give up my American citizenship. I will always be an American," he said.

As for China's view of the United States, O'Neill said the Chinese government is angry because President Barack Obama is threatening the country with trade sanctions.

"China is deliberately devaluing its currency by artificially keeping the Yuan below the global currency market," he said. "The low value of the Yuan gives China a trade advantage. They have the ability to export more low-priced goods."

In time, O'Neill predicts the country will become the richest superpower. "I tell my students it is a great time for them to be alive because they are going to witness extraordinary economic and technological changes in the world. I can't even imagine where China will be in just 10 years from now. Will I be here in 10 years? Only time will tell," he said. "If I am still here a decade from now I will still be referred as Tom the American foreign teacher and that is fine with me."

Ettinger has been living in China for about three years. During his first year, he lived in Yantai, in Shandong province. Now he's living in Hong Kong.

"I did not know a single person," he said of his move to China. "The experience itself was both terrifying and exhilarating. It was like cutting the umbilical cord to a previous life and embarking on something completely strange and foreign. The experience has ended up being the single greatest decision I have made."

Ettinger said he knows many folks who believe Hong Kong is a part of Japan. "It was a British colony until 1997. It is now part of the 'One Country, Two Government' policy with China. While the mainland is Communist, Hong Kong is still 'democratic' and enjoys a very high degree of autonomy," he said.

That's why, he said, Hong Kong is so different from mainland China. "While in Hong Kong, I feel it is a mixture of many large cities - New York, San Francisco, London and Shanghai - with Hawaii weather. It is extremely safe here. And it is truly one of the most vibrant, entertaining and energetic cities ever," he said.

The differences are reflected in the cost of living in Hong Kong, which has its own currency. "Rents are extraordinarily high," and can range anywhere from $1,000 a month for a studio apartment to $5,000 a month for a two-bedroom apartment, he said. "Apartments are selling for millions of dollars." A pair of pants might range from $20 to $150, while a Burger King value meal costs around $6, Ettinger said.

"Most things are comparable to New York City," he said. "The rents and real estate, however, are astronomical. I am very lucky as I live in a $2,000-a-month apartment, paid for by my university."

While costs are high, Ettinger said, job opportunities are plentiful. "There are definitely a multitude of jobs available, in many different sectors such as education, financial and business," Ettinger explained. "Mainland China itself is especially popular for Americans who want to start up companies or build factories. More and more foreigners are learning to speak Mandarin so they could come to China and make some money. Unemployment is also low here, especially in Hong Kong where the rate is only 4.7 percent."

Ettinger has met Americans who are living in Hong Kong. Many moved for banking jobs or teaching posts. "A lot are here because they too crave adventure and are enticed by Asia. Hong Kong is the financial hub of the East and is a very desirable place to be," he said.

Chinese people have differing opinions about the United States, Ettinger has learned. "The majority were anti-Bush and pro-Clinton. They liked the idea of Obama but were not impressed by his visit to the mainland," he said.

And, he said, most Chinese people believe the United States is the pre-eminent world power. "They are also fiercely proud of their culture and their rise on the world stage and they don't tolerate other countries meddling in their affairs. To this extent, they are very similar to the United States," he said.

While in China, Ettinger met a woman who recently became his wife. "She lives with me in Hong Kong and is a Mandarin teacher and private tutor," he said. "I met her in Yantai, and I loved her from the first moment I met her. We are very happy in our new roles as newlyweds."

Ettinger, son of Terry and Roseann Ettinger and a graduate of Hazleton Area High School, (PA), plans on staying in Hong Kong - at least for the time being. "If you live in HK for seven consecutive years, you could become a permanent citizen. It is something which has crossed my mind before but I am too free-spirited to think that far in advance," he said.

Below: Teacher and Students 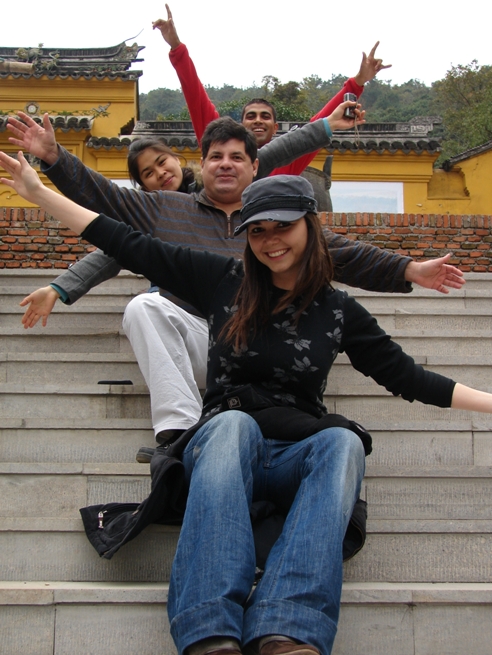