“NOT AN IRISHMAN BUT A BLASKET ISLANDER.”

“On the 28th of April I shook my feathers, made ready my mind, washed and cleaned my body till I had the salt rubbed out of my skin, and with the sea-tan gone from my face and the look of the city swell upon me, I set out for the Depot in Phoenix Park, myself and my friend beside me.”

It was a Tuesday morning in 1927. According to Garda records, “ . . . he joined as member 7561 - Maurice Sullivan with a height of 5 feet 10 ¾ inches. His occupation was Fisherman and he was recommended by “An Seabhac” ( Padraig O ‘Siochfhradha, another Kerryman.)

On 15th March he had left his native Blaskets not having up to then ever been “ . . .beyond Dingle to the east” He had left behind pipe-smoking women, matchmaking, weddings in Ballyferriter, the Ventry races and “pictures of Springfield” on the walls.

Muiris O ‘Suilleabháin was born on the Great Blasket island on Friday 19th February 1904 into an Irish-speaking community. His mother died when he was “only half a year old” and he was reared, in an orphanage, in Dingle and returned to the Great Blasket in 1911. He was enrolled in the Blasket National School on Tuesday 22nd August 1911. Poet, Micheal O ‘Suilleabhain was his great-grandfather and Tomas O Criomthain was his uncle. One commentator wrote of Muiris that he, “ saw things through the eyes of a poet . . .” and had “The poets ability to concentrate his focus and to avoid generalised descriptions.” While an island woman described him as, “Great sport and a nice rogue . . .a breaker of hearts among the girls who were mad about him.” Linguist, scholar (and later Professor of Greek), George Derwent Thomson visited the Blaskets first on 27th August 1923 attracted by the way of life and to learn Irish and ended that first visit on September 30th. The Englishman struck up a friendship with Muiris who, (having been reared on the mainland) was now bi-lingual.) Thompson, who was only a year older than O ‘ Suilleabháin, had almost complete fluency of the Irish language within a few weeks. He urged Muiris to join the police force of the Irish State (the Garda Síochána) and later to write.

While stationed, as a Garda, in Indreabhán, in the Conemara Gaeltacht he wrote Fiche Bliain ag Fás (and the translation Twenty Years A-Growing), were published in 1933. Thomson edited and assembled the memoir, and arranged for its translation into English with the help of Moya Llewelyn Davies. The translation is true to the rhythm of the Irish language. “The month of Samhain is the time when there does be a rush for pollock in the island.”

“Musha, the killing of the castle on you if you haven’t a noisy windpipe and it is no lie for the man who first called you Junie of the Scroggle . . .”It is too much of the pipe you have had. Throw up, and nothing will be on you.”

Fiche Bliain ag Fas was published by Talbot Press where “An Seabhac” was reader. Sean O’ Faoláin described it as “ . . . the first piece of literature in Irish since . . .the eighteenth century.” It became a bestseller in Ireland and the USA and was translated into German.

The work gave a detailed account of island life from the inside. A childhood and adolescence spent in the most westerly point in Europe is vividly described. Every nuance of the storyteller and the most minute detail of a day mackerel-fishing was recorded in the mind of the young Muiris. From the midnight visit of a matchmaker to the pattern of a wild bird’s egg, it’s all there. The reader is brought on a journey from 1908 when Muiris was four-year old to his time as a Garda in Conemara. It was written for his, “ . . . own pleasure and the entertainment of his friends, without any thought of a wider public.”

About the school in Dingle he says, “The schoolmistress teaching us was a woman who was as grey as a badger with two tusks of teeth hanging down over her lip, and if she wasn’t cross, it isn’t day yet.”

In July 1911 his father collected him and brought him home to the island. The teacher tried to dissuade the father, Shaun. “In the first place he will lose his English, and so he will be a fool when he grows up a stripling, if he lives so long”.

Muiris absorbed the stories and lore of the island. He shares with the reader stories of old islanders and tales of those who had returned from their travels.

When one man from Duinquin, who was visiting the Blasket, was asked about his travels in America and England he said, “It is many a savage dog and a bad housewife the likes of me come across.”

And in 1914, a man back from Dingle with a newspaper, predicted, “The two sides of the world are likely to burst against each other any moment.”

We are given a vivid account of a ship that went aground off the Blaskets during the First World War. The Quebra going between New York and Britain was carrying a valuable cargo. Muiris describes the “marvelous sight” of, “the sea covered by boxes and barrels of every description.”

It seems that almost every islander built a store beside their house to keep the salvage and some sold part of it to people on the mainland. There were rows between neighbours about the dividing of the spoils. “By God” one old man was heard to say, “war is good.”

Muiris resigned from An Garda Siochana on 05th July 1934. He didn’t relish the idea of prosecuting his neighbours under the Noxious Weed Act or for having no light on their bike or as George Thomson said, “The task of enforcing the law was not congenial to him.” He was married on 10th July 1934 to Cáit Ni Chatháin a Conemara woman, built a house in Carraroe and hoped to make his living from writing.

He would appear to have been somewhat of a loner. He wrote “I believe it is in solitude that every machine and work of ingenuity was created.” He refers many times, in his writings to the solitary man, “Many a thought comes to the man who goes alone, a thing which is not possible for the man who is fond of company.”

He translated Saint Elizabeth of Hungary and wrote a sequel to Fiche Bliain ag Fas titled Fiche Bliain Faoi Bláth. He didn’t find a publisher for either and went on to write articles for the Irish Press and several periodicals.

Some people partially blamed E.M. Forster for the lack of publishers’ interest in Fiche Bliain Faoi Blath. In his introduction to Fiche Bliain as Fas Forster described it as, “ . . . an account of Neolithic civilization from the inside.”

He rejoined An Garda Siochana on Tuesday 14 Feb 1950. After a couple of days “refresher course” at Garda Headquarters he was stationed for a short time at Oughterard. He was transferred to Galway on 21st June and on 25th June, while swimming at a place called “Lovers’ Strand” near Salthill he was drowned. He left a widow and two children. Eoghan (who went on the become an Abbey actor) and Máirin.

It is, I suppose, ironic that the Atlantic ocean that he loved was to take his life. That great body of water which, in his own words, “ . . .beat without ceasing from end to end of the year and from generation to generation in and out of the coves where the seals make their homes to generation against the wrinkled rocks which stand above the waves and wash.”

The final resting place of the man who always claimed that he “wasn’t an Irishman but a Blasket Islander” is in a cemetery near Carraroe. 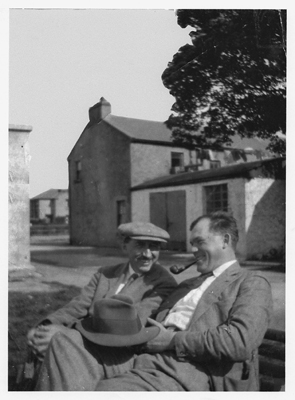