We have a brand new President...

There were seven candidates in the running all with their own talents and ability. But, as Irish legend, Christy Moore said on TV, "Thank God Michael D won."

There is time and a place for Entrepreneurs et al but how many of them could make poetry out of, “A secret made between the morning pitch and toss behind the alley and the encounter with Sunday afternoon snores . . . ”? Or remember with a philosopher’s perception the “. . . soft velvet of his ears as he bent in habit for the winkers.”

There is time and a place for Entrepreneurs et al but how many of them could make poetry out of, “A secret made between the morning pitch and toss behind the alley and the encounter with Sunday afternoon snores . . . ”? Or remember with a philosopher’s perception the “. . . soft velvet of his ears as he bent in habit for the winkers.”

I once knew a young man who had a habit of mistaking other people’s property for his own. When he “acquired” , say, a tool, the first thing he would do was to carve his initials on the handle. I heard of a nipper on a building site who, once, marked a Billy-can by putting a nail-hole in the bottom of it.

Whether it’s branding sheep or dropping a glass eye in a partly consumed pint everyone likes to mark their property. Up to now the effectiveness of such identification was limited.

Now County Meath man Michael Corcoran has brought the marking of property into the twenty first century. Michael and business partner Philip Yeates are the directors of SmartWater Technology Ireland who produce 'SmartWater' - a clear product which gets applied to people's, or companies', possessions and then it glows when put under UV light and each marking has a unique forensic code, placing criminals at the scenes of crimes as well as handling stolen goods.

Michael, ever the entrepreneur, says, "After all of the thefts in our locality, and also the ones on our own farm, as well as our extended families and neighbours properties, I took the bull by the horns and ever since wanted to introduce a product to Ireland that would actually work correctly and catch criminals. I now have the one." He says his security product is suitable for anything from private households' individual items up to companies with large infrastructure to protect.

SmartWater Forensic Property Coding carries a chemical ‘code’ which is registered to an address or location and can mark anything from lead roofing to a wedding ring. More robust than DNA, it is almost impossible to remove and Police can analyse SmartWater to prove where any item of property came from and whether it is stolen. SmartWater Forensic Spray System is used to convict criminals by spraying them with an invisible liquid which marks their skin or clothing with a forensic code assigned to a particular location. SmartWater Index stays on skin for weeks and for even longer on clothing and footwear. It can be used to link a criminal to a particular crime, remaining detectable long after the crime has been committed. Police across the UK routinely scan criminals and recover property through SmartWater and use it in undercover operations, the SmartWater brand has become a very powerful deterrent. Criminals are increasingly aware of SmartWater and fear its power to link them with a crime scene. For this reason they will avoid coming into contact with SmartWater at all costs.

Michael has been trying to bring SmartWater to Ireland for a long time. "We were at our wits' end as although we had insurance many irreplaceable items had gone without a trace," he says. "I had lived in the UK for 12 years, and had seen how effective SmartWater was as a deterrent and also in recovering stolen property so I realised there was a huge need for this effective crime prevention solution to be available in Ireland. Most people have experience theft in some way at or near their homes, many farmers for example have had machinery and large goods stolen one time or another.”

We hope to expand to over 28 full- and part-time staff over the next 12 months, with further expansion expected throughout the country.”

Meath Crime Prevention Officer Sergeant Dean Kerins is fully behind the project, no doubt encouraged by the fact that 100% of UK police forces including the PSNI use SmartWater in their crime reduction programmes .

And Michael Corcoran is “ . . . . also dealing directly with the Assistant Commissioner's office in An Garda Síochána “ . Thjs Meath man says ; “ With a SmartWater taggant, stained notes can now be linked back to a specific crime - more importantly - so can the offender. SmartWater is used extensively throughout the UK. Our taggant will resist aggressive attempts to remove it and is not affected by the normal forensic evidence retrieval processes. SmartWater's Forensic Spray Systems are already used to protect Banking halls. Remote ATM pods, Cash delivery centres, Cash delivery vehicles, and anything else worth marking.”

Michael and his team would be delighted to make a presentation to the relevant departments to show how they can develop a relationship with the customer.

Telephone SmartWater on 00 353 1 442 8960 or contact Michael Corcoran at; michael@smartwaterireland.com for information. 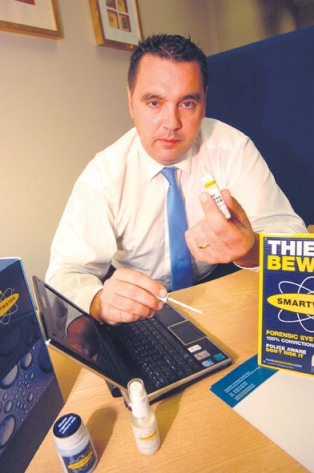