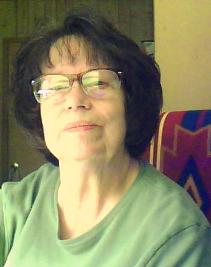 It is not work that kills men, it is worry. Work is healthy; you can hardly put more on a man than he can bear. But worry is rust upon the blade. It is not movement that destroys the machinery, but friction. -Henry Ward Beecher
That quote reminds your editor to be thankful she is still able to work and receive a great sense of accomplishment because she can. Some recent events have made that fact precious, and gratitude abounds.

Eleven poems this month: One by Bud Lemire ("Someone Took My Picture") and four from Bruce Clifford ("When I'm Gone," "Can You Hear Me," "I'm Sorry," and "My Final Hour.") There are two from Linnie Jane Joslin Burks, who passed away in March just before her 72d Anniversary so the little "Two Rooms" was almost a prediction for the solid love they had. Her other one should bump our conscience "We Hold Our Gladness." This lady was the sister of your editor's mother.

From John I. Blair, the following four poems: "Zander's Dance,"  "On A Day Like Today,"  "Sisyphus," and "The Brick Garden."  They were actually received after the issue made press time but have been added for the month. Because John I. Blair had already sent his column "Always Looking--People Who Made A Difference" before his pc did the crash thing, it was ready. He chose a woman who worked with the Suffragists, another timely note for this election year.

Leo C. Helmer's column ("Cookin' With Leo") brings a recipe showing with a bit of this and of that and some ingenuity, one can have a special breakfast. In"Angel Whispers" Peg Jones shares a message from the angels concerning humor and how important it is in our lives.

Mattie Lennon's "Irish Eyes" gives us a rundown on the recent literary event he attended and the pic at the bottom shows him with some of the dignitaries. Thomas F. O'Neill discusses history of elections in "Introspective," while "Eric Shackle's Column" by Eric tells how the Australians are gearing up for safety during an earthquake.

Mark Crocker has added more to his second book of Rabbo Tales, "Rabbo II -Chapter 7 Part B, Tomorrow Never Knows." Previous chapters of this tale can be accessed by clicking the author's name.

Click on Mary E. Adair for bio and list of other works published by Pencil Stubs Online.This issue appears in the ezine at www.pencilstubs.com and also in the blog www.pencilstubs.net with the capability of adding comments at the latter.