By Mattie Lennon
I told you last month that I was heading off to Doneraile Literary and Arts Festival. Well, it exceeded expectations. There were workshops on everything from pottery to songwriting.
Elena Buttner gave a wonderful workshop on pottery making and I left Doneraile the proud owner of one of her pieces. There are people already entheustacilly writing songs who attended Ger Woulfe’s workshop. The event was opened by Senator David Norris in Creagh Castle. Senator Norris gave a wonderful talk on the castle, Joyce, his own ancestry and anything else that came into his head; a wonderful speaker.
Peter Duffy performed a fantastic one-man show depicting “The Great Hunger” by Patrick Kavanagh. The show portrays the full poem version of this work. The long epic poem is one of the great works of Irish literature and perhaps Kavanagh’s masterpiece. It was banned at one stage and the powers that were decided to prosecute Kavanagh for writing pornography. When the Garda arrived at Kavanagh’s flat with the summons, Kavanagh’s comment was “It’s good enough for me. Anyone that writes anything that a policeman can understand deserves anything they get.”
The poem concerns the life, hopes, frustrations and struggles of the anti-hero and small farmer Patrick Maguire. A narrative poem, full of lyrical beauty, drama, description and mystical insight, it is an unsentimental portrait of small farm life in 1930s Monaghan and by extension all Ireland. Peter says,”I use the complete text of the poem and strive to convey its poetic as well as its social and mystical qualities. The stage activity (movement, use of props, lights, sound, etc.) is used to translate the poem from the page to the stage. To make it accessible/interesting to a wide audience.”
Peter Duffy, in costume, says:

"Clay is the word and clay is the flesh
Where the potato-gatherers like mechanised scarecrows move
Along the side-fall of the hill - Maguire and his men.
If we watch them an hour is there anything we can prove
Of life as it is broken-backed over the Book
Of Death? Here crows gabble over worms and frogs
And the gulls like old newspapers are blown clear of the hedges, luckily.
Is there some light of imagination in these wet clods?
The stage becomes a potato-field in “October-colured weather.”
One commentator wrote of Kavanagh’s masterpiece; “It shatters the image of the happy peasant, close to the soil and to nature. His vision is of a world of stunted lives, of lives far too bound up with the land for land's sake. The consequences are that the other areas of life and experience are ignored and remain barren: the life of the imagination and the physical life of love are ignored at great cost."
One of the most unusual features of this festival is that it was 98% free. Diarmuid Hudner and his committee are already working on next year’s festival.
We lost two of our most famous literary figures since I was in contact with you last. Maeve Binchy, world-famous novelist and newspaper columnist passed away and a few days later Con Houlihan top sports writer and “Irelands greatest man of letters” went to the celestial newsroom.
On Thursday 23rd August the fleet of tall-ships arrived in Dublin after a lively race from A Coruña and berthed along the quays of the Liffey for The Tall Ships Races 2012. It was a spectacular sight for four days with thousands thronging the streets.
The annual Hill Billy Tractor Run (proceeds go to charity) will be held at Lacken, county Wicklow on Sunday 09th September. Details on www.hillbillyrun.net
And I’ve just got a bit of good news. A new One-Act Amateur Drama Festival will be held in The Playhouse Theatre, in Derry, over three days in late November this year.
My One-Act play A Wolf by the Ears will be staged by the Shindig Drama group. Watch this space!

Click on Mattie Lennon for bio and list of other works published by Pencil Stubs Online.Pic below: Diarmuid Hudner, Senator Norris, Mattie Lennon 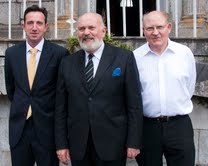