It’s a long way from Mulrick, County Cavan to Statin Island and, though not geographically, it is further to Sicily. When Paddy and Crissy Shiels found that Marianna Randazzo has written a book, Given Away, a Sicilian Upbringing, they had reason to celebrate. The author was, what she describes as, “a surrogate mother” to Crissy’s nieces Mary Ann and Samanta Emerick, at one stage during their young lives. The book, mixed with some fiction is inspired by the true events in her aunt Tina’s life.

Marianna told me, “For years I heard a one-sided account of my mom’s upbringing in Sicily during WWII. Believe it or not, she constantly praised Mussolini for all the good he did for her family. Of course this was contrary to what I had learned in school but far be it for me to question our Irish nuns with the wooden rulers in my alma mater, St. Finbar’s School. For years I heard stories that did not include my mom’s sister who was only 14 months younger. When I questioned her about the child’s whereabouts, I was told, 'Oh, she lived in another town, with an aunt.' This coming from a mom who never allowed us out of her sight or off the porch seemed rather strange. As I got older, my aunt Tina began to tell me a very different story about a very different upbringing.”

Apparently, Tina had been trying to tell people for years but it became one of those repetitious stories that old people tell and young people haven’t a clue about the context or time period to truly comprehend. Living in Staten Island, Marianna began three years of interviews, over the phone, as her aunt lives in Florida. Through long phone chats and the occasional visit to Florida the story unfolded. Her story was sad, compelling and inspirational. Marianna says, ”Of course there were some questions that could not be answered therefore I needed to create a bit of a backstory. Also, there are still some descendants around and I don’t want to be sued.”

As the story unfolds we learn that Tina was a child of miserable circumstances. Yet, at no time does she consider herself a victim. Like many children of unhealthy environments, she learns to endure, forgive and move forward. Tina’s account of life in Sicily, during the German Occupation brings events of the Second World War to life through the eyes of a young child. Tina’s war story begins on the day she arrives at school and finds her desks, chairs and books tossed onto the streets.

Intimidating German soldiers paint all the windows purple and occupy her school. Her education is disrupted and the difficult life she was leading becomes even more painful and arduous. Her escapes to caves for shelter, secret missions during the night for bread, dodging planes flying overhead, her harassment from German soldiers are all recollections of her childhood and provide an account of her life set against the backdrop of war. Tina is a survivor. She is able to forgive those who took so much away from her. Her spirit trumps over adversity. As she grows older, she struggles to keep the harsh realities of World War II and abandonment at a distance through her sense of humor, imagination and determination.

About the author: She is a mother of three, diverse adult children, has been married over 33 years to one man. She was a NYC school teacher for over 30 years and eight years ago she retired due to health reasons but could never stop teaching. She reinvented herself as a writer, “I began writing for Staten Island Parent Magazine, educating parents and then I began working diligently on my second passion writing.” She didn’t forget to tell me about “ . . . the Irish nuns with the wooden rulers in my own alma mater, St. Finbar’s School.”

And what does she think of Ireland now?
“In 1984 I was in Ireland, went to the Waterford Factory only to find out it was closed on that particular day and that they didn't allow children under five on the premises. My son was three at the time. We spent the rest of our visits in the pubs having a good time eating, drinking and hanging out with the locals.” 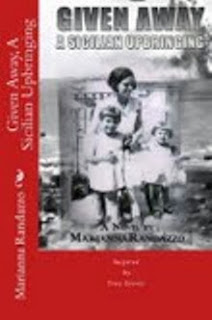 Given Away, A Sicilian Upbringing is a very worthwhile read and is available at: