I was saddened to read of the passing of Captain Michael Hnatowicz. We’d taken so many happy journeys together, more than I can count actually, and he always made everyone’s trip comfortable, pleasant and safe. He’d had a good life and a very long one. Ninety two years! Long enough to have accomplished many important things along the way including serving in the U. S. Navy during WW II, from 1941 through 1945. He served in the South Pacific on a submarine called the USS Guavina and was honored that this sub’s primary job was to rescue American pilots who had been shot down. One of those rescues Capt. Hnatowicz proudly recalls, was a young aviator many people today call “41.”

Sixty-three of this man’s ninety-two years were spent in marriage to Teresa Witkowski who was a student nurse when they met, and before he died he’d headed a big and happy family made up of eight children, twenty grandchildren, one great-granddaughter and a new great grandchild coming in March. Captain Hnatowicz’s loving family relates that he always said his family was as large as the last person walking in the door. He was beloved in return.

I know I gazed up at the bridge as this captain sailed the ship we were on and I wonder if he ever looked down at me. I like to think he did. Many people got aboard for short and important journeys, often thousands. There were long slippery mahogany colored benches for his passengers and his shipping company actually hired men to shine the shoes of the business men aboard. These shoe shine men, wearing old and soiled navy blue caps with black brims carried their shoe shine kits with them and waited to be summoned to those wishing a shine and they’d kneel before them and polish their shoes for the princely sum of 25 cents. They even polished some women’s shoes too. The smell of that shoe polish was heady. It saddened me to read that years later one of those long-time grizzled old shoe shine men, in a hurry to disembark stepped over the heavy cable strung across the boat’s bow to keep the cars and people in place until the boat was firmly docked, and fell into the water where he died.

In time snacks and hot dogs would be sold aboard this Captain’s ship, but for many years and for the grand sum of five cents people could sit outside, weather permitting, or in a section for non-smokers, and women even had their own section of the boat, no men allowed. There was no blaring music; just the sound of the rattle of newspapers, the wind, seagulls, and blasts of passing boats and of course the extra loud blasts of Captain’s horn as he approached the docks at White Hall Terminal in New York City and St. George terminal on Staten Island, both a part of the great state of New York. He never missed hitting his mark when he was docking although the big houseboat shaped vessel did bounce off the many lined-up groaning pilings before it connected with its dock. This captain was proud of his work and was extremely punctual with his pick-ups and deliveries.

I often wondered if Captain Hnatowicz gazed at the magnificent green Statue of Liberty as he passed her while going back and forth in that old and historic harbor. I know she gazed at him. Or did he glance up at the iconic New York City skyline as he approached it? It likely never bored him. And it never bored me. I rode that Staten Island ferry since I was a newborn back in 1938 and was proud when I was finally allowed to ride on it by myself to meet people in “the city” and I rode it every morning after graduating from college to my job at Kenyon and Eckhardt Advertising, which back then was on Park Avenue. Subways were part of the journey too and all of it done in painfully pointed high heels, stockings with straight seams, girdles, hats and gloves. Women back then were nuts.

So thank you Captain Hnatowicz, for shuttling me between Staten Island to New York City so many times, so safely and happily. Bon Voyage. 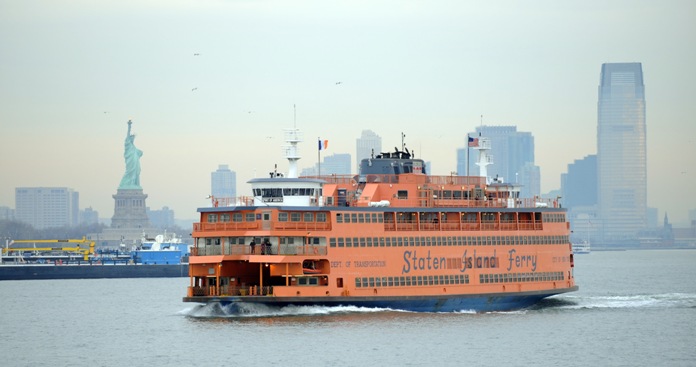