I told you last month about the launch of “The Best of Billy Keane.” I was there. I bought the book and I have read it. It is a collection of 59 articles by one of Ireland’s best loved columnists, authors, after-dinner speakers and genuine gentleman. The blurb describes this all-rounder from Listowel Co. Kerry, as “ . . The discerning sinner turned confessor.” In this collection Billy covers most aspects of human life from “Born Again Virgins” to the tragic death from cancer of teenager Donal Walsh. Donal died from cancer as a teenager. In the months and days leading up to his death he pleaded with anybody contemplating suicide to change their mind. He wanted to live but knew he couldn’t. On his deathbed he asked his Parish Priest what was on the other side. The priest said, “I don’t know Donal, but it’ll be a far better place with you in it.” Billy writes, “The boy who changes lives has changed mine. Donal’s message is easy to get. Live. Live and make the most of it.”
John B. Keane had the most balanced approach to the Catholic Church of anybody I ever met. Billy is following in his footsteps. He has no problem criticising the approach of the Church to certain matters. But when writing about pure Christians like his old school Mate Father Pat Moore and Father Padraig Walsh the spiritual side of him is very evident. He can even turn Agony-aunt dishing out advice on how to cope with the “. . . Imaginary but sometimes barbed-wire border under the duvet. From the swallows returning to Listowel (their old homes demolished during Celtic-tiger years) to “Born again Virgins” it’s all there.
Bill is a publican but he always modestly describes himself as “a barman.” His father once said that you can write a thousand words about anything. His son took him at his word. Who else could pen a lengthy article on the installation of a stainless steel urinal in the gent’s toilet of the pub. When he initially suggested the new urinal his 86 year old mother and the barmaid, Phil, claimed that “There’s nothing wrong with the old toilets that a bucket of water couldn’t fix” they were informed by Billy, that they were going on about something that they knew nothing about ” . . . because neither of ye are men.” Billy got his way. The gleaming stainless convenience is in position,. I tested it. Making a sound like a hosepipe being played on a hubcap.
And there is the story of Paddy Joe Keane from Kill nard , Co. Laois. In late 2011 Paddy Joe was diagnosed with lung cancer and told that he had only a few months to live. He said, “ I don’t want everyone to be at the wake when I can’t be there myself.” He planned, and held, his own wake while he was still alive. A typical Irish wake was held in the Thatch pub. He died on February 16th 2012. His son Paddy said later, “ My take is Paddy Joe was saying to his family and friends,’ the memories of the last stand will keep me alive and keep ye happy’. Billy Keane sums it up, “Paddy Joe Keane, the clever handyman from Kill nard, might just have figured out a new and better way of dying.” Which I’m sure would be a good thing. “
Billy doesn’t confine his observations to this little island. An eye on international affairs. He was delighted when Donald Trump got the Republican nomination in 2015 his joy knew no bounds when The Donald was elected. Why. Well, according to Billy, if Trump hadn’t made it to the Whitehouse he had his eye on the position of Taoiseach here. Eamon DeValera, who was an American, ran for the British House of Parliament ,as a candidate for County Clare, in 1917. He was elected by an overwhelming majority. He eventually became Taoiseach and later President of Ireland. If Trump followed the same route the author reckons he would have built a wall around County Clare, “to keep the Tipperary hurlers out.”
He also has some revelations about “The Man Who had it All Figured Out”. He paints a comprehensive picture of this individual but doesn’t tell us who he is.
In a valuable piece to men who are reluctant to visit a doctor about ailments of the reproductive organs he quotes a character from one of his father’s works; “I’ll let know man look at my apparatus until I’m being washed for the grave.” Billy is a man who can get a bit of humour into almost any piece of writing and come up with titles like, “Who Needs A Man When You’ve Got Your Pension Book?” but he can dish out some valuable advice. His writing about his own vulnerabilities have, in my opinion, saved lives.
Great writing from a great man.

Ballpoint Press has also recently published Then There Was Light a collection of stories from fifty seven people about the arrival of Rural Electrification. The scheme was rolled out seventy years ago when the first pole was raised at Kilsallaghan, Co Dublin on November 05th 1946. These stories are from ESB employees, and people from rural Ireland many of whom remember the “’lectric light” being installed in their homes and the interaction between the locals and the ESB crews.
Former ESB engineer Noel Mulcahy tells of how he was chased out of a cabbage field by an axe-wielding farmer. As he ran up a boreen, barely ahead of his pursuer he was lucky enough to flag down a passing car. He learned later that the Yankee driver was none other than Baron Handley, the man who offered $50 Million to the Queen to buy the six counties which he planned to give to the Republic.
Interaction between the crews and the locals wasn’t always friendly. Con Foley from Knockananna, County Wicklow tells of the night of the big “switch-on” in his village in august 1957. There was a dance and a row broke out. Con writes that it , “ . . .always reminds me of John Wayne fighting as Sean Thornton with squire ‘red’ Will Danaher in the film, ‘the Quiet Man.” He goes on the explain a Wicklow man’s approach to fighting. By way of illustration he tells the story of how one local fellow left a girl home after the dance. On his way home he was attacked by three or four fellows whose swinging punches connected. He later said that he had a perfect night, “ a court from a good looking woman and a fight to round off the proceedings.”
Eamon Ginnane from Carrigaholt, County Clare, gives a vivid account of how sabateurs risked electrocution in their bid to disrupt the “big-switch on” .
There are titles such as A Narrow escape With First Electric Blanket” and “ Sir, I’ve No Homework Because The New Light Blinded Me.” And of course some of the “Wire-men” who arrived in rural areas were considered “Ladies Men” but you’ll have to read to book to find out about them.
BALLPOINT PRESS 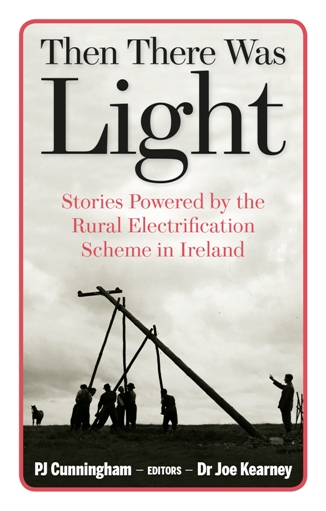