2017 has been a strange year so far. On one hand, it's been incredible to have new experiences in a new city, but I've also been intentionally battling and paying attention to my anxiety and mental health, which has made for some difficult days. This year, or at least since February, I've resolved to take care of my mental and spiritual health, before anything else. I've been doing that, little by little, but I haven't put my full focus on it. I slowed down a lot, became more intentional with my conversations, 'tried' to control how much I was on social media. I'm ready to take it on full-force though, I think. Self-care is so incredibly important, I know this, but it's harder to actually put it into practice. Emotionally, I haven't really been consistent, much like my writing on this very blog. I apologize for that, sincerely, but sometimes you just have to take a step back, even if it's something that 99% of the time brings you joy and relief.

I have come to the realization that for many, many years, I have been running from my anxiety, hoping to get away, but never actually getting very far. So now, I have stopped running. I have turned to face this giant monster that has made a home in my head. Feet planted, I am going to war every day. Slowly, one step at a time towards it, and it is finally retreating instead of barreling towards me like it has for years. I'm sure it will always be in my field of vision, but now I am hopeful that one day, it won't be close enough to wound me quite as much. Now that the monster is releasing some of its hold on my mind, I am starting to see just how resilient it's been. My mind is capable and brilliant, and imaginative, and so many words that I never saw before because I was so susceptible to fear and anxious thoughts. It's mystifying that I am finally using these words to describe my own brain when I spent so many years in school studying other brains. It's so unfamiliar to have confidence in myself. These are words that other's used to describe me, sure, but I could never form them in my own head. It's quite a beautiful sentiment to finally see your potential after so many years of others seeing it in you.

It takes quite a toll on you both emotionally and physically, to re-wire your brain after so many years, which is ironic because I'm trying to heal my mind in the first place. But the saying goes "it gets worse before it gets better." That's basically been my life for the last few months, but there is light on the other side for the first time in a while. I read something a few days ago that really hit home. The author compared herself to an egg, fragile, seemingly intact and clean on the outside. Inside, however, was a different story. There was a mess inside that shell. You do everything possible to keep from breaking, because heaven forbid, you crack and someone actually gets a glimpse of that mess. That would be the end of the world inside your mind. My shell shattered a few months ago, and at first, I never thought I could put myself back together. But I have been, and while it's not the perfect egg that it used to be (or seemed to be to everyone else), I think the visible cracks have made me stronger. Those cracks are the vulnerability of sharing about my mental health and not just holding it all inside.

If I'm being honest, I've questioned God more than once in the last few months. Not my faith in Him or His existence, but things like 'Why would God make me with so many emotions and wild thoughts?' 'Why does He let my thoughts spin out of control?' 'What is the purpose for the anxiety that has had such a strong hold on me?' Those kinds of questions. I think those kinds of questions are okay because I've been challenging myself instead of just staying stagnant. Personally, I think God likes questions like that. He's been patient with me, slowly revealing His plan. Today, I read a quote that made it even more evident.

"What if what you are going through right now, is God creating in you a story, that someday someone else will desperately need to hear?"

One of the things I needed the most during the darkest times was to know that I wasn't alone. That is why I tell my story and speak about my own battle; so that one day if needed someone else will know that they aren't alone either and so I will continue to press on and fight knocking the ugly monster back one step at a time. If you are reading this, and are also battling a monster, please reach out to me. I'd love to have a conversation with you about it. 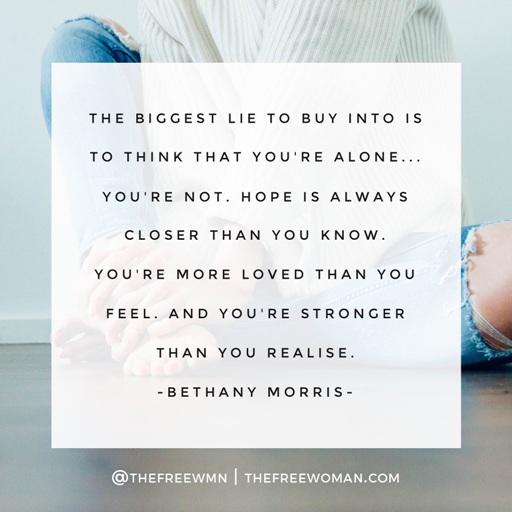