Ever since I was very young I was a huge Spiderman fan. I used to watch Spiderman cartoons on TV after school and like millions of others I too enjoy watching the Spiderman movies online.

Superhero movies are immensely popular in America and like many of the superhero franchises - Spiderman has an even bigger draw at the movie theaters in China.

I’m not a big movie goer but I do enjoy watching films online via Amazon instant videos and that includes the Spiderman movies.

In China, sometimes a scene will be added to an American film such as adding a China location to make the film more appealing for a Chinese audience. The movie studios do this to increase the draw at China’s box-offices.

There have been delays in China for the Marvel's blockbuster Spiderman: Homecoming and China’s webslinger fans are waiting with great anticipation for the film’s release. New slated posters have been released in China’s movie theaters featuring the webslinger in familiar Chinese locations as teasers for the ever-growing Spiderman fans.

There are various posters in China that show Peter Parker in his Spiderman regalia swinging from a hammock above the Great Wall of China. (See Bottom of Column) Another poster shows the webslinger posing for a selfie in front of Shanghai's Oriental Pearl Tower and yet another shows him riding a horse in his spidey-costume across a picturesque mountain-scape.

Other posters showcase Spidey posing near various other Chinese landmarks. Including, a poster of spidey visiting a group of cute Pandas.

None of the poster images will showcase in the actual film but that won’t stop the Spiderman fans from flocking to the theaters on its Chinese release date of September 8th and maybe I will be one of those attending the screening of the film due to being a huge Spiderman fan myself.

Hollywood understands the huge profit potential of marketing their films for the Chinese audience due to how popular American films are in Asia. The New Spiderman movie is an example of how Hollywood is using the Chinese culture and their landmarks to enhance an even greater interest in the film. Hollywood’s marketing strategy certainly works and it shows in the movie studios overall profits from Asia.

Spiderman: Homecoming is estimated to finish in the $780M range when all is said and done, with China serving as the final market for the film to sizably increase its box office haul. Next Friday, the movie will open in China and attempt to match other recent blockbuster successes in the region. Enjoy the posters I included with this column while I patiently wait for the new Spiderman film’s release date ……. 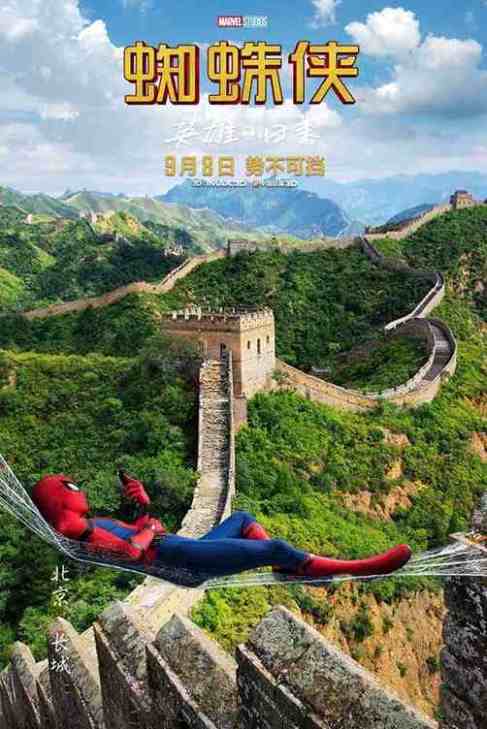