I have, in the words of Churchill, “a lot to be humble about” but I have one boast. Our family burial ground, in Baltyboys, is situated on the highest, bleakest and coldest site in Ireland. I would pity any unclad female who had the stand there, even on a summer’s day.

And what, you may ask, prompted that paragraph? You are probably asking “Has that fellow lost the plot?” (Pun intentional.) Read on. When I read in the Global Times that the authorities in China are clamping down on the increasingly popular event of striptease artists at funerals I contacted China's official Xinhua News Agency and they confirmed that authorities have, indeed, announced a new crackdown. An attendee at a village funeral in Cheng'an County in Hebei Province said mourners of all ages, including children, enjoyed the raunchy performance at a recent send-off. But he said “I felt something wasn't right. The performance crossed the line. I had heard about hiring strippers to dance at funerals but had never seen it myself. I was shocked when I saw the strippers." He went on to say that, “the villagers were not surprised by the erotic display at all.”

China’s Ministry of Culture have released a statement, which detailed two cases. They say the practice distorted the "cultural value of the entertainment business" and such acts were “uncivilised". In both cases, in north China's Hebei Province and east China's Jiangsu, strippers were “invited to stage obscene performances, “it said. The organisers and performers have been punished. The ministry added it will continue to work with the police to stamp out the practice. The crackdown will involve residents being offered a financial reward for tip offs made to a hotline that divulge “funeral misdeeds.”

The above information prompted me to wonder what, if any, legislation governs such a practice on this island. I wrote to the Department of Justice but I didn’t get a reply. I then contacted the office of the Attorney General Seamus Woulfe asking for information on the subject ( I half expected to get a reply from him describing my request as a "Dog's Dinner"!). A communication from his office by Christine O’ Rourke, Advisory Council, informed me, “. . . this Office is unable to assist with your query. “ So I don’t know where we stand, (that is not a double entendre), with regard to the legality of strippers at funerals here.


EVOLUTION OF THE WICKLOW MOUNTAIN HARE


I was in Boston on Saint Patrick’s Day. Some wouldn’t see it as a Big Deal? But it was a big deal for me.

While our Minister, Michael Ring, was chatting to the great and good in Boston City Hall I fell into conversation with Mr. Haakon Doherty, Professor of genetics at a Swedish University. He had been giving a lecture at the department of Genetics at Harvard Medical School. When I found out what field he was in I started to do a bit of showing off. I pointed out to the good professor that the Wicklow mountain hare has two short legs on the right side of his body. He has evolved this adapted feature through following the sun around the Wicklow hills for millions of years. I claimed that our hare is the only animal in the world to have this genetic advantage.

The great man wasn’t long taking the wind out of my sails. He quoted chapter and verse and explained to me that the Canadian hill badger is evolving in that direction and is only a few thousand years behind the Wicklow mountain hare in this race. Professor Doherty has found evidence in human feet of the evolution of “wheels.” He agrees that it took millions of years for legs to evolve from fins but he has claimed in a recently published paper that he has discovered a process to accelerate the rate of human evolution to such an extent that as early as the year 2100 it will be possible to have humans traveling on their own “wheels.” I asked him two questions;

“Where did you get the surname Doherty”? And “Why have species millions of years older than us not grown wheels”?

He told me that his Grandfather Hugh Doherty was Irish; Editor of the Barnasmore Bugle newspaper in Donegal and when the paper ceased publication in 1903 he went to work for a newspaper in Stockholm where he married a Swede.

In answer to my second question he said, “We didn’t grow wheels because there weren’t any roads or flat surfaces until a few thousand years ago, which is the blink of an eye in cosmic terms. He explained that when biology was facilitating travel the terrain to be negotiated was catered for by legs, fins and wings. Evolution adapts us to suit our environment and may cause either the gain of a new feature, or the loss of an existing feature. He said “If there were motorways a hundred million years ago we would be moving around Quincy Market on our own “flesh-and-blood roller skates” .

He went on to explain that, “The larvae of the mother-of-pearl moth when startled, will roll itself into a round shape and roll away and he mentioned a bacterium. I can’t pronounce the clinical term but it moves by spinning filaments called flagella like tiny propellers which rotate at a speed of several hundred times per minute.” Seeing that I was taken aback he went on, “if those are not wheels they are fairly bloody close.” He told me (without giving any detail) that his formula to accelerate human evolution can be employed to enable humans to grow such things as “ear lids” within a few generations but for now he is concentrating on the “wheels.” The human castors, according to Professor Doherty would have an outer re-generating “tyre” of hard tissue and the centre would be cartilage- like I was wondering about the blood supply to the “inner tube” but didn’t dare ask the question. The professor read my mind, and said “The flesh-and-blood wheel could use the umbilical connection similar to that used on merry-go-rounds”.

Seeing that his erudite instruction was falling on barren ground he gave me a practical demonstration using a CD and one of my shoelaces.

Back in my hotel The Boston Plaza Park, maybe it was my imagination, but when I checked each foot I think I could detect the beginning of little stub-axles below the ankle bone but I would like a second opinion.


“I am a hoarder of two things; documents and trusted friends.”

I can identify with Muriel Spark on that one. But I am also a hoarder of less useful things. That’s why the title of Jess Kidd’s second novel The Hoarder jumped out at me. When award-winning Kidd decided to write a sit-com set in a funeral parlour. She applied for jobs working in one but didn’t get one, even when she told funeral directors she’d do work experience for them.

Like that other great writer on death, Kevin Toolis, London born Jess had a Mayo parent. Her mother would regularly bring her to wakes and funerals. So death was more familiar to her than to her London friends.

When she was researching this multi-layered and novel she visited many hoarders; some of whom wouldn’t let her in. If she had called to me I wouldn’t have refused her admission. But I would have emphasised that I don’t want to be “cured.” Of course there are hoarders and hoarders. The hoarded, Cathal Flood, of the title is different. Not many hoarders have in their collection, a tray of glass eyes or a shrunken skull. This hoarder also has a violent past and an alleged connection to a disappeared schoolgirl.

Whether Kidd is describing the gurgling of a rusty toilet cistern or “the Pidgeon shit on Nelson’s column” the prose are pure purple. Her main character whatever his past has some philosophical lines, “. . . the loveliest eyes are found in the heads of women who have suffered.”

The Hoarder is published by Canongate Books Ltd and I couldn’t possibly do it justice in those few words. The reviewer in the Sunday Express summed it up in two words, “Utterly unputdownable” Buy it. (See cover pic below.) 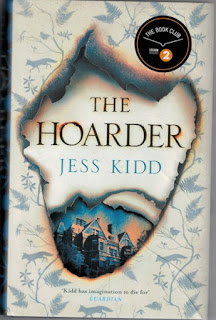