Sometimes I’ll walk around a library or a bookstore and stare at the kadzillions of books stored on the shelves, and I think to myself, “What chance would I have writing a book and trying to get it into readers’ hands when there are already countless millions of books out there, and many of them are really great ones?” And then I answer myself and say “not much,” and I go home.

I did just that for a whole lot of years, far too many, and eventually decided to get over myself, to stop sulking and comparing, and to take out that bucket list, look into it, put on a pair of good heavy blinders and get on with it. Becoming 80 had a lot to do with this decision, too.

You know what blinders are, I’m sure. They are those leather square things put on a horse’s bridle next to his eyes so that he can only see straight ahead. He cannot be distracted by anything else going on, and so can only focus on the finish line, the final objective. Blinders, to a person striving to attain success, can help to keep one's eyes on the goal. I finally decided to put on my blinders and get on with it, so I wrote a book. It is called “Queenie.”

This is a story about a young girl in the 1950s who is suddenly, and with no explanation, torn from her well-heeled life for reasons she is never told. She is forced to leave her school, The Academy, and her friends and to go to public school with kids she had always thought were her inferiors, kids from blue collar and even poor families. She is nicknamed “Queenie” by the public school students, because of her snobby airs and accent, but what the public school kids don’t realize is that Queenie is overwhelmed with terror every day. She hides in the girl’s bathroom at lunch time. She keeps her head down and won’t engage with “those “kids. She is badly beaten up at one point. A friend dies. In short, Queenie’s “new” life is hell for her, a strange and vicious struggle, and she does not know why she was forced to endure it.

In time these young public school kids teach Queenie about racial prejudice, homophobia, poverty and intolerance, things that had never occurred to her before. She even learns about some of the unpleasant aspects of America’s history, which until then she had not known.

Queenie can never really know in her lifetime to which group she belongs, or which accepts her. She was educated by both. She does however, learn whom she can trust.

In time she finds out the horrifying answer as to why she was pulled from a wealthy safe life to one quite the opposite. And yes folks, there is a bit of sex, drugs and rock & roll in Queenie. But just a bit, I promise.

Did I have to write this book? Yes. I well know that Maine is filled with great writers. Do I presume I am one of them? Absolutely not. But write it I did and the devil take the hindmost. “Queenie” was ably edited by the editor and general manager of the Coastal Journal, Raye Leonard, and if my book flows and sings in places, that’s why.

Queenie can be found in local bookstores as we speak, and on Amazon too. The cover is bright yellow and there’s a photo of a public high school on the front with two red painted doors at the school’s entrance; it was through these doors she, as a terrified young girl walked, and two years later walked through them again, to the outside, no longer afraid, and she was a far stronger and better person than she had been going in. 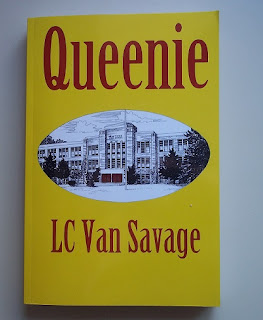