LEFT-HANDERS DAY AND THE STORY BEHIND THE VALLEY OF KNOCKANURE

I’m not one of them and if you are you represent 10% of the population. You may have been discriminated against and subjected to cruelty in the past. Even today the other 90% don’t fully understand you even though you are probably more creative than they are.

We Irish are great for knowing feast-days etc. But how many of us know that August 13th is International Left-handers Day.

Some years ago I compiled and presented a radio programme on the subject and there was not a lot of interest in the subject on this island. Now the Left-handers of Ireland have their own club. Their email is: lefthand@e-ireland.ie They feature an on-line shop where you can purchase items designed for the left-hander and their Newsletter includes much useful information:

“As left-handers, we are very adaptable and most of us cope very well with the “right-handed world”. Many left-handers do not realise the benefit they could get from using left-handed items as they have always got by with the right-handed versions of the various items such as scissors. However, having actually tried the products and found that they really do make a difference, they often write to tell us that they would not be without them now!

Left Hand Questions and Answers
We are sometimes asked a variety of questions. Here are three that we are most often asked:


Q. Are left-handers more artistic than right-handers?
A. Left-handers are often thought to have a higher spatial awareness than right-handers. There have been some very famous left-handed artists, among them Michelangelo and Leonardo da Vinci. They were both members of the Renaissance school of artists that encouraged its members to paint with both right and left hands. There was one study of art students that reported that 21% were left-handed and 28% were mixed-handed. There have been other studies which did not agree with these findings. There have been similar studies and similar findings done with architect students. However, the fact remains that architects have frequently reported a high number of left-handers in their ranks.

Q. If a left-handed child is forced to write with the right hand, will a stutter develop?
A. It has been reported in children who have been forced into using their right-hand. Much of the early research showed high percentages of changed non-right handers with stutters. From the ‘40's, researchers suggest the stress ******ed the speech defect, and others suggest that there was no connection between enforced change and stuttering at all. Even so, it is unwise to force a non-right hander into right handedness.”

Psychologists have written many articles about handedness. Some have attempted to change lefthanders from a lovable klutz to a doomed race. Some have argued for a variety of reasons, ranging from less immunity to disease to a higher accident rate, lefties didn’t live as long as righties.

There are those that claim there is evidence that left-handedness are caused by minor brain damage at birth. As a result, lefties are clumsier if perhaps also more creative. Some medical literature report lefties have a higher accident rate, are more likely to have their fingers amputated due to power-tool accidents, suffer more write fractures, etc. They also claim lefties suffer a higher incidence of allergies, epilepsy, schizophrenia, and certain learning disabilities. Other studies show lefties with an unusually high frequency of depression, drug-abuse, bed-wetting, attempted suicide, lower-than-normal birth weight, sleeping disorders, and autoimmune diseases. Sports experts say lefthanders have a better natural curve when throwing a baseball. However, they always follow this statement by stating the lefthander may have a natural curve, but he never knows where the ball is going. In the past left handers were known as “sinistrals”. ( In Ireland the word was “cíteog”. My late father used to describe the left hand as “the hand the Devil wipes his arse with”.

According to the lefties Newsletter:)”.

“When I entered the military service, they ordered me to salute the Officers with my right hand. Why? I wanted to salute with my left hand. Who started this saluting with the right hand in the first place? Someone said it was Napoleon, but what does he know? He’s dead!”

“Greetings between two individuals usually begin by shaking hands, RIGHT HANDS. Who started this? Was it Napoleon?”

“Do you know when I purchase a baseball glove I must pay more for it then same type of right-handed glove? Because it happens to be left-handed. I asked the salesman why do they charge more for the left-handed gloves? He said they do not manufacture as many even though they use same amounts of material. That’s interesting! So, if they make a glove for a nonexistent hand, the price would be prohibitive?”

“Try buying left-handed golf clubs, now that will cost you a bundle. Oh well, I guess we should consider ourselves fortunate, so far they have not forced us to buy left-handed basketballs”.

“Do you realize all playing positions on a baseball team are not available to lefthanders? Let me walk out on the field and tell the coach I want to play third, shortstop or second-base – he will tell me I’m not qualified, I’m LEFT-HANDED. How many catchers do you know that were left-handed? So, out of nine positions we qualify for only five. Forty-four point 4 percent of the team is selected before we arrive at the ballparks. Coincidentally, all right-handers qualify for all positions. I say strike three. You’re ALL out!”

“How many left-handed guitars are available to us “Southpawlers???? Oh, do not mind that – just play the right-handed guitars, not that much difference. SURE! Of course, the same applies to other musical equipment, pianos, fiddles, etc. I think these individuals are all “OUT OF TUNE.??? Oh well, someone has to carry the gear.”

“Have you ever experienced a right-handed person teaching a left-handed person how to tie shoestrings or neckties? I recall, as a youngster, someone was teaching me to put the correct shoe on the correct foot. I took the left shoe, put it on my left foot and the individual said, “very good, you put it on the RIGHT foot.”

Incidentally, a thorough scientific study has determined ALL polar bears are left-handed, or, maybe we should say left-pawed.

An Irish leftie has proposed the following “bill of lefts”

1) Free to salute with either hand from noon ‘til midnight.

2) Free to place the left hand over the heart while paying respects to our flag.

3) Free to suck your left thumb from noon to midnight.

5) Free to shake hands with the left hand from noon ‘til midnight.

6) Scissors must be manufactured for either hand. All right-handed manufactured tools must contain a left-hand modification kit.

7) A rule preventing players on baseball teams from wearing a glove and a rule allowing left-handed pitchers to hit at least three players during a game.

8) Authority to change all plumbing systems. We want that darn hot water control on the RIGHT side. You would be surprised how many lefthanders have been sizzled by that left control. We want ALL controls changed. Example: To start the water flow you must rotate the control clockwise. (That should get a few of them).

9) Authority to reconfigure the entire transportation system to satisfy left-handed requirements. Example: All highways redesigned to make the left lane the primary lane. All signs must point to the left and, certainly, no right turns would be allowed.


That’s what the lefties have to say; I’m not really qualified to comment, being a dextral, although it has been suggested that I’m ambidextral (equally clumsy with both hands). Right?


Nearly every Irish person will be familiar with the ballad “The Valley of Knockanure.” But what about the story behind it?

“I, Pádraig Ó Ceallacháin, formerly Príomh-Oide Scoile of Knockanure NS Co. Kerry hereby affirm that about 20 years ago I brought to Mr. Bryan McMahon (sic) NT Ashe St. Listowel a few verses of a traditional ballad on the murdering at Gortagleanna (sic) Co. Kerry in May 1921 of three soldiers of the Irish Republican Army - Jermiah (sic) Lyons, Patrick Dalton and Patrick Walsh. I also supplied Bryan McMahon with a copy of the sworn statement of Con Dee the survivor and requested him to rewrite the ballad and to add whatever verses were necessary so that it would be historically accurate. This Bryan McMahon did and later supplied me with printed copies of the ballad in question "The Valley of Knockanure" a copy of which is affixed herewith.

I came across the above on a website called Listowelconnection.com and it reminded me of an interview I did nineteen years ago with Kerry songwriter Dan Keane I’m attaching link to same.

And the following account is from the Pres. school yearbook of 1992. In the days before the internet girls used to ask their parents and grandparents to tell them the stories of historical events.

There was a mission on in Athea this particular week. Con Dee, Paddy Dalton and Paddy Walsh were after attending the mission on the morning of the 12th May 1921. They had Mass, Confession and Communion. They had come a couple of miles to Connors cross where they had arranged to meet Ger Lyons. As Ger arrived, the lorries which belonged to the Black & Tans surrounded them. The only thing the four men had with them was their rosary beads. They hadn’t expected to meet the Tans but it is rumoured that a woman in Athea told the Tans that she had seen them leaving a while earlier and that they were on the road. The Tans captured them, beat them up and threw them into the lorries. They took the four men about a quarter of a mile in the direction of Listowel. They took them out of the lorries and marched them into a field where there was a fort. This field is now known as the “Martyrs’ Field”. This field was owned by William McMahon of Kilmorna. The Black & Tans lined the four men up and selected a firing party from the Black & Tans. The Tans were ordered to shoot the four men, the orders were given and the shots rang out. Paddy Walsh, Paddy Dalton and Ger Lyons fell dead. Con Dee was wounded in the leg. He turned and ran down the glen as shots rang out after him. He kept going on towards the bog with his leg bleeding heavily until he came to a road. He had travelled a mile when he was spotted by a man who had a horse car and rail. He put Con into the horse car and covered him over and brought him a mile or two towards Coilbee and put him into a meadow and hid him in a dyke and contacted some of the other comrades.

Con was collected by Donal Bill O’Sullivan who helped him across about eight fields to Enrights of Ballahadigue where a doctor was called from Listowel to treat his wound. He had lost a lot of blood by this time. Later that night Con Dee was removed in a pony and trap to a farm between Ballylongford and Lisselton where he was cared for until his wound healed and he had recovered to health. Con Dee emigrated to Philadelphia in the late 1920s. He used to make regular visits to Ireland and called to the people who cared for him while he was wounded and would also call to the location where the murders had taken place. Con Dee died in Philadelphia about ten years ago. 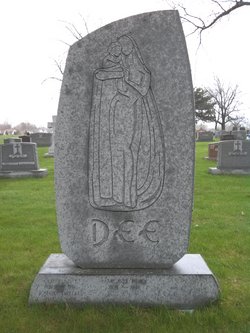 
There is a monument in memory of these men at Gortaglanna and also the well-known song “The Valley
Knockanure” is dedicated to these men.