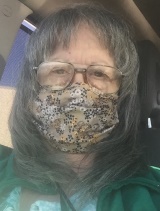 “February, a form pale-vestured, wildly fair.
One of the North Wind’s daughters with icicles in her hair.”
― Edgar Fawcett.

Volume 24! Who knew that our foray into the Web would prove such an endearing and enduring adventure! Our first issue for this step into the future is filled with tidbits of past and present happenings, some told solemnly, backed with data, and some that woos us poetically.

Although this month is Valentine Day time, among many other designations such as Black History Month, we have only one poem that is romantic. Bud Lemire, who is the author of our one article "After Covid Symptoms," also composed "Lovers in the Mist." His other poem is more an echo of current times, "Her Anxiety."

Walt Perryman, our poet from your editor's section of western Texas, has three poems: "My Cowboy Hat," "God Gave People," and "Driving Miss Daisy." Bruce Clifford's three poems are "Domino Dreams," "New Fears," and "I Hope You Don't Mind." Phillip Hennessy, who informed us another of his poems we published will become a song, "True Friends" sends his poem for February -- "Have A Word."

The poem "Tabletop Tumulus" is the sole one from John I. Blair but his column "View from My Back Steps" includes tips on how he 'manages to manage' care for his garden, pets, and the feral cats and occasional possums and raccoons, besides birds, that he feeds. Busy man.

Marilyn Carnell, who grew up in and eventually became the Mayor of the same town your editor was born in, clues us in on how the town handled the making of the first Jesse James movie in her column "Sifoddling Along." Mattie Lennon, in "Irish Eyes" shares an ancient poem along with how Ireland welcomed an International organization, Toastmasters,  and how it helps people, then he includes some current event updates.

Judy Kroll's column "On Trek" is an encouraging treatise on personal growth. Thomas F. O'Neill in "Introspective" discusses how 3D printing is being utilized in different ways in China.

Melinda Cohenour has an excused absence and thus her first article for this eZine is highlighted in "Armchair Genealogy." Rod Cohenour, also with an excused absence sets his "Cooking with Rod" aside for the "Encore Cooking Presentation"  from a guest cook of Leo C. Helmer's, Brandy Kizer.

Continued gratitude to Mike Craner, Webmaster and co-founder of this eZine, for his original suggestion that we "try putting it online." His ingenuity and consideration has been a blessing for 23 years and now we are launching the 24th with this issue! Thanks, Mike!

We will see you in March!