View from My Back Steps

I have two possums that regularly visit my yard, looking for food and water and shelter. Possums have long fascinated me – such apparently “primitive” mammals and yet they have survived as a species for millions of years and appear to be doing just fine right now. I wonder, what’s their secret?

One possibility is that they benefit from having built-in “eternal optimism”. It’s hard to discourage a possum. That they even found my house (with its continual supply of the things they need – food, water, shelter from weather and predators) amazes me. I’m in the center of a city of 400,000 that in turn is in the center of a metro area of 7,000,000+. And it’s been nearly 70 years since this area was rural. Possums move very slowly. They appear to have only one speed – slow and lumbering. Crossing a street is done only at considerable risk (and the consequences are often visible in the neighborhood). Yet they persist.

Persistence seems to work very much in favor of the possum. The ones who come to my patio show up even in the daytime now, which is unusual for an animal that is supposed to be nocturnal. They’ve learned that there are no serious predators here and that I’m not dangerous. I often find one just outside my patio door, vacuuming up cat chow from the bowls I place there for my outdoor cats. Sometimes I have to open the door and “speak sharply” to the possum before it leaves, slowly. And then it comes back, after I close the door and leave.

My outdoor cats have come to an understanding with the possums (as they have with the raccoons). The cats stay out of the road. And the possums pretty much ignore them.

Fortunately cat chow is not all that possums eat. They have the reputation, well-earned, of being Nature’s cleanup crew, eating just about everything, including earthworms, ticks, baby rats, mice, and the sunflower seeds I put out for songbirds. And unlike squirrels, rats, and raccoons, apparently possums are less likely to find their way into attics (although they are very skilled at climbing).

And they multiply – that’s no doubt a major part of the answer to my puzzle. Opossums usually reproduce twice a year. Once mating is done, the male, called a jack, leaves and doesn't return. After a gestation of just 12 to 13 days, female opossums, called jills, give birth to up to 20 live young at a time. The babies, called joeys, are about the size of jelly beans when they are born. The mother has only 13 nipples, however, and only that many babies survive. First come, first served, after they have made it to the pouch where they spend the first part of their lives. Wasteful, but it has worked for millions of years.

In all the time I have been observing possums in my yard I’ve never seen a mother with young. But then the little ones would be hiding in their mother’s pouch. What I believe I am seeing right now is a male possum “courting” a female. It appears very clumsy and ineffective; and the times I’ve watched, she has rejected him, being apparently more interested in feeding than mating. We will see.

Part of this, I think (very unscientifically) is the male possum’s tail. Possums have remarkably long tails. Their tail can be as long as the rest of their body – up to a foot and a half on large males. And they’re capable of holding it out perfectly straight and horizontal behind their bodies, despite it having no bones (it’s all muscle). I have been wondering if that is a way of displaying on the male’s part. “Look what a big tail I have.” Kind of like “Look what a big nose I have.” Or whatever.

I will definitely continue my voyeurism with possums as the springtime progresses. And who knows? Maybe this year I’ll get to see babies! 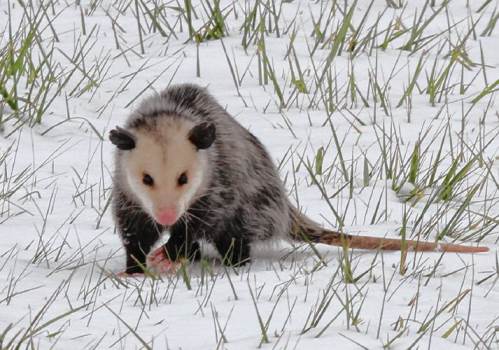