When I was a kid---wait! Don’t turn the page---I’ll really try not to bore--- I was goofy over bugs and creepy crawlers, dinosaurs and fossils. I’ll admit I never found a dinosaur I could sneak home although now everyone in the scientific community recognizes that all birds are descendants of dinosaurs, so I might have gotten away with a feathered creature or two.

But anyway, when I went foraging for those things in the surrounding woods I’d haul lots of them home but never found anyone who’d chat with me about them. My sister would scream, my parents would bellow to “get those dirty @#$!#% things out of this house instantly!!” and my girlfriends would do what my sister did, only louder. Oh the loneliness! I had to find out about those things from books. Think of it! Books! No one in my immediate family had the slightest interest in those “disgusting, useless----things!”

Mongo and I had sons who were very interested and I was happy about that and we had some lively hunts for “those things” over the years, but they grew up and found that girls, parties and cars were far more fascinating than wondrous fossils, so again, I was sad and alone with my weird passions.

But then came Noel, rhymes with “bowl,” last name Ouellette that doesn’t rhyme with anything. He is my sister’s grandson and a good pal of mine for a lot of reasons but mainly because he just loves all those things I loved as a youngster, with heavy emphasis on the dinosaurs and fossils, and best of all his interest just continues to grow. And I get to learn more and more about the Big Green Lizards and the lowly, fascinating, history-laden fossils he finds.

Noel, it can be said, is a savant. A dino-savant. At 11 years old, he met with Professor of Earth Sciences William Clyde at UNH, to show him what he had collected on his various adventures. A few months later Clyde recommended Noel to the director of the SEE Science Center (a children's museum) in Manchester NH to add to their exhibition on dinosaurs and paleontology. Imagine! Job security at 11!

When Noel was around 3, I took him to a toy store and told him he could pick out whatever he wanted as long as it was no more than $1.50. He moved off to a huge bin beneath some shelves filled with a gigantic tangled mess of plastic dinosaurs, all species, all colors. And who knows? Dinosaurs could have been any color at all, not just green and brown. But whatever, Noel began to empty out that bin and one at a time tossed those toy reptiles onto empty shelves above. With each grab-and-toss he announced the “official” name of the beasts, where they were born, if they were born live or from eggs, what they ate, who were their worst enemies, how big they grew and how many years ago were they stomping about on the earth’s surface. By the way, to the uninitiated, MYA means Million Years Ago. For example, old T-Rex lived 65 MYA, give or take.

Back to the bin. Noel finally emptied it, defining all of the BGLs, I said something like, “good job, Noel! Let’s put ‘em all back now” and I glanced up to see this large crowd of customers surrounding us, spellbound that this little kid was giving a fascinating speech and that he knew all those facts, and there were just so many facts. I said something stupid like, “Yes folks, he gets all his brains from me.” I was ignored.

Noel is a well-rounded young man; good grades, he’s a musician and an athlete. He is also so much fun for me to be around. He arrives at my home with boxes of sorted fossils and we spread them all out on a table and he explains where they were from, how old they are---it’s amazing. I am never bored, I ask thousands of questions and Noel knows the answers to all of them. It’s also thrilling for me to hold in my hand a big scary tooth from a prehistoric crocodile he found on a dig in Maryland or any of his plethora of other fossils from New Jersey, Montana, Wyoming, or wherever he’s gone with his father. They travel to different fossil hunting sites each chance they get and Noel can spot a shark’s tooth as small as a comma that has as much significance to him as a Megalodon’s tooth would, and he is completely confident he’ll find one of those someday.

Noel is always excited for any chance to display his fossils wherever help would be needed in a dinosaur and fossil exhibit, so email me and I'll put you in touch with him. I am certain one day Noel will be trudging around somewhere and he’ll see what looks to others like a big dusty rock, but he will know immediately it’s an undiscovered full-boned dinosaur. He’ll photo and claim it, get it shipped to a museum and in the world of bone worshipers, he will be famous forever. “Noelasaurus” has a nice ring to it, don’t you agree? 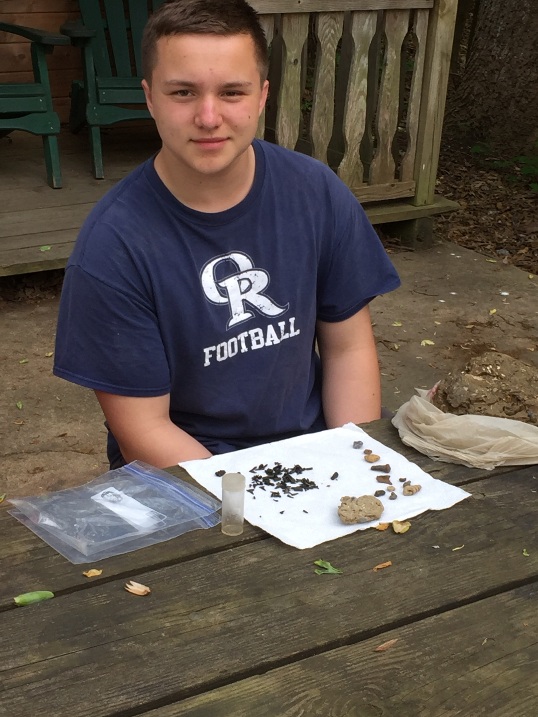