My DaddyJack may have been the world's most awesome Feminist. He taught all four of his girls to seek knowledge in our every action: playtime, camping during the cold winter when even the bacon grease froze in MomaMay's camp skillet, watching the stars on blankets in the backyard with a special snack and MomaMay and DaddyJack pointing out Constellations and telling stories, on our many car trips where we "navigated" with a map that showed mountain peaks and rivers and monuments, so many wonderful learning adventures. We were expected to call out points of interest and, if we had time and were so inclined, many a detour would be taken to explore.

He taught us to value our bodies, to be proud of being girls, to throw baseballs and softballs, to ride bikes and horses, to pitch a tent and safely build a campfire and then to master cooking on one!

He taught us math and engaged our minds in crossword puzzles, jigsaw puzzles, word games, spelling bees. We stayed up late as a family and roasted marshmallows over the fireplace logs while he and MomMay regaled us with stories of the strong women in our lives and theirs.

He taught us to be ladies and to permit men and boys we encountered to be gentlemen. He defined the boundaries to be observed in a loving and non-prejudicial way. He taught, by example, how a true Christian man cherishes his wife...a full helpmate, a full partnership as God intended where love was always the guiding force, never EVER violence. He and MomMay could and often did test wits in political or religious discussions, with full respect and honor shown to both by both.

DaddyJack never ever administered corporal punishment to me. One time, after I had managed at about age four to escape our backyard and become lost in the mesquite and Spanish yucca thickets that then bordered our home, MomMay in exasperation and still quaking with fear demanded he spank me. He put me across his knee, raised his hand and then said, "Lenamay. No way can this big, rough hand be used to strike that tiny baby girl!! I will not spank her!" Believe me, though, the spanking might have been easier to abide than when he would peer over his glasses and say, "I am deeply disappointed in you! I thought you were smarter than this..." for NOTHING was worse than disappointing my beloved DaddyJack!!

(Pic below shows Daddy, sister Jacquelyn as graduate of TWU, and Moma.) 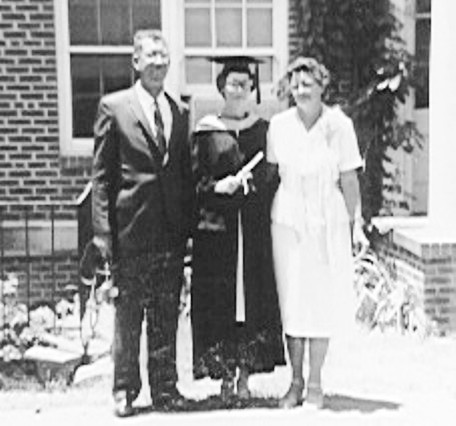