Tones That Are Tender

Could I find again the woodland
Where I loved to lie and dream,
While Dragon flies were dancing
To the rippling of the stream.


In the 1960s when my contemporaries were listening to Radio Luxemburg and singing (and talking about) “a Whiter Shade of Pale”, “You Keep Me Hangin’ on” and such numbers I had my ear glued to the steam-radio in anticipation of a Percy French song sung by Brendan O’ Dowda.

Much has been written about William Percy French and now Berrie O’ Neill has written the definitive biography of the great man. Percy French’s grand- nephew Courtney Kenny puts it in a nutshell when he says, “For a very long time there has been a distinct need for a proper biography of Percy French. And here it is, at last”.

Percy French who is largely remembered for his songs was a multi-talented person. In a period when Irish songwriters were penning ballads about widows daughters dying from TB and coffins being carried down bog roads Percy French introduced a lot of humour to the art. While he wrote some sad songs (the words of Gortnamona written when his first wife died is one example) most of his songs were comedic and consequently have stood the test of time. He could be inspired by a simple sight of phrase (what modern writers call a “gaddick”.) while entertaining on a cruise-ship he hear a passenger say, “They’ll be cutting the corn in Creeslough today” and “An Emigrants Letter “ was born.

William Percy French born in County Roscommon in 1854 was a singer, poet, painter and parodist. He was, at times accused by the upmarket media of the day of being, “Demeaning to the Irish people.” One of his best known songs, “Come Back Paddy Reilly to Ballyjamesduff” has been often parodies. After the Equality Marriage Referendum here a native bard came up with” Come Back Paddy Reilly to Marry James Duff.”

“My interest in Percy French was not at all a planned one I was born on a farm near Eyrecourt, Co. Galway a long time ago. As the farming life did not appeal to me I joined the Bank of Ireland and by 1982 through a mixture of good fortune and having kept my nose clean I found myself manager of the city office of the Bank in central Belfast.

Amongst my customers at the Bank was the late Oscar Rollins, successful business man and a councillor in the Borough of North Down. On a golfing trip to Southport in Lancashire he had serendipitously come across the grave of Percy French in Formby. Stricken by a sense of pathos he had become devoted to bringing about a much greater appreciation of the songwriter, poet and entertainer, particularly back in French’s homeland.

With characteristic determination and strategic thoroughness Oscar enlisted to the cause no less a person than the famous Irish tenor, Brendan O’Dowda who was at that time seen as the personification of Percy French, He also found ready support from Ettie and Joan French, nonagenarian daughters of the great songwriter and entertainer.”

Octogenarian Berrie went on, "When the Percy French Society decided that it would be appropriate to publish a biography of Percy French the search for a suitable author eventually and unexpectedly focused on me and I was entrusted with the task. With a little help from family and friends ‘Tones That Are Tender ­ Percy French 1854­1920’ was published by Lilliput Press on behalf of the Percy French Society in 2016. This, labour of love, was launched at Belfast’s historic Linenhall Library on 4th May, my eighty sixth birthday.”


And they couldn’t have made a better choice. Ronny Maxwell of the Percy French Society told me, “ The author provides us with a most comprehensive study of French's ancestry and family background and we gain much insight into the social history of his time and an in depth knowledge of a charismatic, unselfish, rather eccentric, family-loving individual. The well-chosen title reflects French’s kind, inoffensive personality and the gentleness of his watercolours with their generally gentle shades. I have just finished “Tones That are Tender” and it’s many years since I read such an informative work. This biography brings out the many talents of Percy. The beautifully presented hardback includes thirty of his watercolours as well as snippets of information not in the public domain which the author ferreted out. For instance Dublin music publishers Piggott’s rejected his song “The Mountains of Mourned on the grounds that it wasn’t, “. . . serious enough for a ballad, not funny enough for a comic song.” What was the “gaddick” for this work which has stood the test of time?

In the words of the great songwriter himself, “Looking at the range of the Mourne Mountains from Skerries one clear afternoon I found myself repeating, ‘the Mountains of Mourne sweep down to the sea’. This line kept recurring to me till one day it wedded itself to an old Irish air, and the combination seemed so happy that I set to work, or rather shut myself in my top room with pen, ink and paper, and waited.” Wasn’t it well worth the wait! When he composed “The Mountains of Mourne” he was living at 21 Clifton Hill, Skerries and I’m sure that now , from his celestial “Top room” he is pleased the know that, as I write, his beloved Skerries has been selected as the tidiest town in Ireland.

Written as twenty nine cameos this book (having given a brief ancestral history of the Frenches ) is a comprehensive account of the life and times of the genius who was born in Cloonyquinn, County Roscommon in 1854 up the his death in 1920.

Tones That are Tender is a not-to-be-missed publication.

Details at; www.Lilliputpress.ie or from Ronnie.maxwell@btinternet at the Percy French Society. 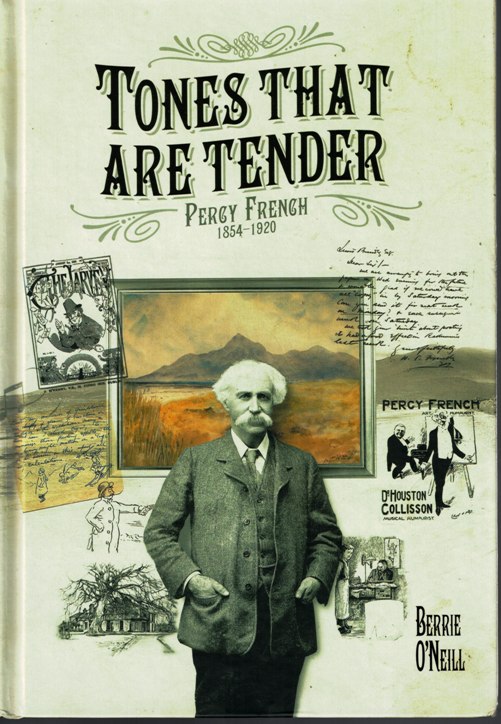