Contrary to what the Bard said some murders can be hidden for decades. A murder investigation has been mounted last month into a killing which took place 34 years ago.

Chief Superintendent Walter O ‘Sullivan says they are investigating the death, “. . . as if it happened today.”

On Saturday 14th April 1984 a dead baby with 28 stab wounds and a broken neck was found on the beach of White Strand, County Kerry. A murder hunt got under way led by Superintendent J. P. Sullivan. On Thursday 26th April Detective Sergeant Gerry O ‘Carroll of the then “Murder Squad” arrived from Dublin.

Almost every female of child-bearing age in the Cahersiveen area was treated as a suspect.

Then it was established that Joanne Hayes from Drumcunning Lower, Abbeydorney, almost 40 miles away, had given birth but there was no baby as a result. Detective Superintended John Courtney and Detective P.J. Browne, both from the Murder Squad, (known as “The Heavy Gang” in Dublin), arrived in Kerry on 29th April. All three Murder Squad Gardaí were Kerry men. Courtney was from Anascaul, the native place of explorer Tom Crean and O ‘Carroll and Brown were both natives of Listowel; a market town in north Kerry famous for fiction-writers. Joanne Hayes along with three members of her family were taken to Tralee Garda station where Joanne Signed a confession that she had killed the “Cahirsiveen baby” and her family signed statements that they had witnessed the killing and driven 40 miles to dispose of the body. (Journalist Joe Joyce says, “The statements had the kind of flourish well known to those of us familiar at the time with confessions in Garda stations . . .”) The Hayes family could not have committed the crimes that they allegedly confessed to.

Joanne had told the detectives that she did have a baby, that it died at birth and she had buried it on the family farm. She gave an exact location of where she put it. More than once she offered to accompany detectives to the scene. Was her offer(s) accepted? No. The Gardaí conducted a half-assed search and, of course, found nothing. Members of her family located the baby’s body exactly where she had said it was. Blood tests proved that she was not the mother of the “Caherciveen baby” but the Gardaí proceeded to charge her with the murder. (I can’t find any evidence that a file had been sent to the DPP.) When the case came to court the state announced that it was not proceeding.

When it was established that Joanne Hayes was telling the truth about the death of her baby and the disposal of its body the Gardaí had to take a different track. They put forward the superfecundation theory whereby Joanne could have had twins be two different fathers.

A subsequent internal garda enquiry failed and a public tribunal of enquiry, chaired by Mr. Justice Kevin Lynch, started in January 1985. It lasted 84 days, 109 witnesses were called and 61,000 questions were asked (One lawyer asked Joanne 2,216 personal questions). Ostensibly the tribunal was an examination of Garda behaviour during the interrogation of the Hayes family but turned out to be a concerted effort to humiliate, embarrass and devastate Joanne Hayes and her family. Professor Brendan Kennelly described it at the time as being like, “A medieval witch hunt.” Kerry’s Eye editor Ger Colleran says, “Everyone knew Joanne was innocent but if that was proved then a lot of very powerful and important people would be shown to have misbehaved badly. The system would have been rocked, and careers ruined. So there was only one option – to destroy her.”

When the decent people of north Kerry, and further afield, decided to stage a peaceful protest Justice Lynch threatened to jail them if they disrupted the tribunal. The learned Dublin-born judge described them as “raucous, ignorant, urban dwellers” and Detective P.J. Browne knocked great fun out of describing Abbeydorney as “Babby-dorney.”

In his report Justice Lynch accused the Hayes family of “barefaced lies and blatant perjury” but the Gardaí only “gilded the lily” and Detective Superintendent John Courtney simply, “elevated wishful thinking to the status of fact.” Justice Minister, Michael Noonan agreed with Justice Lynch’s report and likened his powers of deduction to those of Sherlock Holmes. However not all politicians felt that Justice Lynch had anything in common with the sleuth of Baker Street. Senator Mary Robinson who was to become President Of Ireland and later United Nations High Commissioner, asked how the Hayes family came to give signed confessions to the murder of a baby which, “ . . .for scientific reasons among others, they were not in a position to have carried out or to have any part in.” The Dáil committee on women’s rights described the questioning of Joanne as “insensitive, harrowing, horrific and shameful”.

Kevin Lynch worked hard to protect the establishment and he was well rewarded for it. He became a Judge of the Supreme Court in 1996.

Gerry O ‘Carroll, who was later promoted to Inspector, spent years calling for a DNA test which he claimed would prove that Joanne Hayes had twins. He knows now. In late 2017 a DNA test proved beyond all doubt that Joanne Hayes was not the mother of the “Cahersiveen baby.” And there is no match between the baby and anyone Whose DNA is held on the State’s DNA database.

On January 16th Superintendent Flor Murphy offered a public apology on behalf of the Garda Siochana, to Joanne Hayes for the “stress and pain” she suffered as a result of being wrongly accused of killing the “Caversiveen baby.” He said, “I believed it was important to exonerate Joanne Hayes once and for all. A wrong had been visited on her and saying sorry was the right thing to do.” And Acting Garda Commissioner Donal O Cualain sent a letter of apology followed by a phone call to Joanne Hayes.

On the same day Taoiseach Leo Varadkar said he wanted to, ". . . reiterate the apology the Gardaí made to Joanne Hayes and also to make that apology on behalf of the State as well". He went on to say that Ms Hayes was, "Very badly treated by our State and by our society.” Mr Varadkar said: "I can't offer compensation here now but it's something that I think we can discuss with her representatives in the period ahead."

In recent days there have been numerous requests on social media to have Joanne Hayes’s book, My Story re-published. It was first published by Brandon Books in 1985. O'Brien Press has acquired the Brandon name and the rights for selected titles from its catalogue in 2012. The MD of O’ Brien press told me that Joanne Hayes' My Story was not one of these titles.

The Garda’s serious crime review team (SCRT) have now launched a murder inquiry into the “Caherciveen baby’s” death and Superintendent Murphy has asked for the public’s help.


When I was writing the above a paragraph in Ireland’s Own jumped out at me. I don’t think the author was thinking of the Kerry Babies when he wrote it but I believe it’s worth including, “A time comes when the damage done to us has to be acknowledged and realised. Who knows what surprises may come our way when we clear out the space for them. The arrival of February is an especially apt time to take stock in this way, the best kind of spring cleaning.” 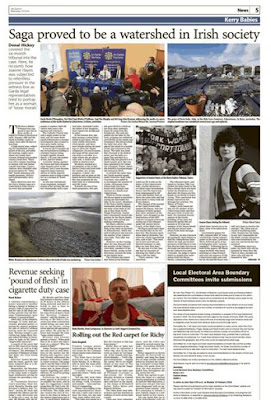