“The dead don’t hide the truth and they never lie. Through me they can speak." - Dr Richard Shepherd.

London born Dr Richard Shepherd is the forensic pathologist in the UK, who investigates and solves mysteries of unexplained or sudden death. He is a visiting professor at City University London, Honorary Consultant at The Royal Liverpool Hospital and a registered UK Home Office Forensic Pathologist.

He has been involved in the investigation of many high profile deaths He advised on the management of UK fatalities following 9/11, and was the forensic pathologist expert for the Bloody Sunday Inquiry and the death of Diana, Princess of Wales. He is a member of the Ministerial Independent Advisory Panel on Deaths in Custody and also of the Restraint Accreditation Board, and has been a member of the Criminal Injuries Compensation Appeals Panel.

He appears on Channel Five's Autopsy, where he investigates the mystery and intrigue behind the deaths of high profile celebrities such as Michael Jackson and Michael Hutchence.

His first book Unnatural Causes was published, by Penguin, in September. In it he brings the reader on a, step by step, journey through his career. His literary prowess is evident from page 1, where he mentions the North Downs, “ . . .bearing an odd similarity to the rise and fall of the human body.” In almost every one of the 392 pages I asked myself why this wordsmith waited until he was sixty five to write his first book. 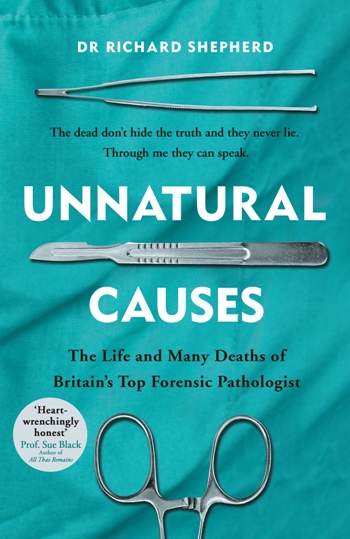 He first became interested in “bodies” at age thirteen when a book was smuggled into his school. Yes. I know what you’re thinking! But. . . No. The book was a textbook on forensic medicine and the young Richard was immediately hooked.

In the course of his career his work has put killers behind bars and ensured that the innocent walked free. His evidence has overturned what appeared to be water-tight cases. He is to all intents and purposes, a detective whose question is, “How did this person die?”

Dr Shepherd has faced serial killers, natural disaster, 'perfect murders' and freak accidents, all in the pursuit of the truth. And while he's been involved in some of the most high-profile cases of recent times, it's often the less well-known encounters that prove the most perplexing, intriguing and even bizarre.

Like Rumpole of the Bailey, I’m sure, he at times annoyed his spouse at home in the kitchen while carrying out experiments on joints of meat. "I didn't stab every Sunday roast with a variety of knives, but the children definitely did see me do it sometimes," he once said.

But a working life in death, dealing with some of humanity's darkest corners is sure to take its toll. Shepherd doesn't flinch from counting the cost to him and his family. Exposure to stomach-churning violence meant that he was eventually diagnosed with PTSD. He felt that he wouldn’t ever be able to practice at the chosen profession, which he loved, again. But, “Gradually the world of colour and beauty began to reform itself around me.” He once again was able to wield the scalpel over his “patients” who neither complain or tell lies. He sums up his return to practice in the final six words of this book, “I did care. I still do.”

Laurence J. Peter said, "Before publisher’s blurbs were invented, authors had to make their reputations by writing.” Perhaps he was right.

The blurb on this book states, "Unnatural Causes is an unputdownable record of an extraordinary life, a unique insight into a remarkable profession, and above all a powerful and reassuring testament to lives cut short.” This is an understatement, in the words of a more able interviewer than I , "Dr Shepherd , ” . . . 'Puts the reader at his elbow as he wields the scalpel'."

Jimmy Norton was at a wake in Ballyknockan where the daughter of the house was a member of the caring profession who insisted in giving a detailed, chronological account of her father’s last hours. When she got to, “ . . And about four o’ Clock Rigor Mortis set in”, Jimmy asked, “Is that what kilt him.”

A reporter from East coast radio was interviewing an 80 year old west Wicklow woman who had just got married for the fourth time. The interviewer asked her numerous questions about her life and about what it was like to be married again at 80 and then about her new husband’s occupation. “He’s a funeral undertaker”, she said.
The newsman became very interested and asked her about her first three husbands and what they did for a living. She paused, smiled and told him that she had married a banker in her twenties, a circus ringmaster in her forties and a preacher in her sixties.
The reporter was astonished and asked her why she had married four men with such diverse careers. He got his answer;
“ I married one for money, two for show, three to get ready and four to go.”

A Warsaw man who was married to a Wicklow woman felt that a meeting with the local undertaker was imminent. He believed that his wife had poisoned him when he found, on her dressing-table, a small empty bottle bearing the label, POLISH REMOVER.

Lisdoonvarna, County Clare is famous for its annual Matchmaking Festival. It is the location where, in many people’s lives, love-stories began. Now Dublin author and poet Michael Lacey, currently living in Lisdoonvarna, has taken the matchmaking to a new level. In his latest publication "The Proud Chamber Pot" he matches up a chamber pot named Helaine with a jam pot called Sam. I won’t spoil it for you with any more details because you see this is actually a children’s story. It is beautifully illustrated by Italian artist Lucia Tripepi.

Oh yes . . .they all lived happily ever after. 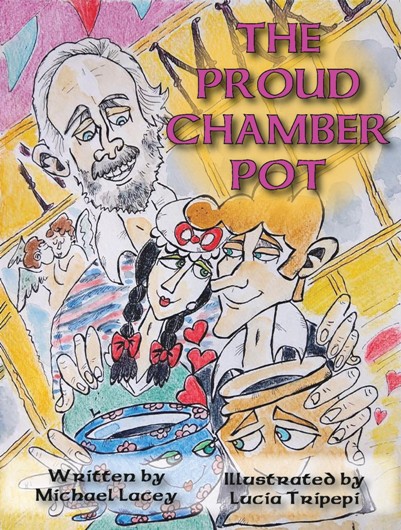 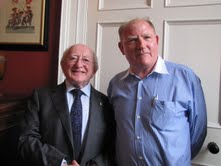 
I am delighted to report that Michael D. Higgins will be our president for another seven years.

See you in December.