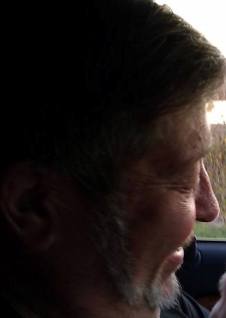 Well, it's the Fall season, Halloween just past and Thanksgiving just around the corner. My better half and I have been scratching our heads trying to figure out great new desserts. Our challenge? To find a recipe with no eggs to accommodate a nephew with severe egg allergies. We played around for awhile and came up with an absolutely fabulous dessert: Chocolate Raspberry Mousse that will knock your socks off!

Most chocolate mousse desserts are based on a frothy mixture of rich chocolate thickened with egg yolks beaten to a creamy blend with melted butter using egg whites whipped to firm peaks to fold into the mousse. This would not work for our needs.

My sweet mate did her research, then reached into her old recipe box to create a good way to achieve the rich flavor, the foamy texture, and a diverse blend of tastes to excite both the eyes and the palate. I think she did a great job. One source of inspiration came from a blog that featured a traditional chocolate mousse enriched with espresso. If you can add espresso, surely you can add raspberry puree, right?

Here's where we found the inspiration: Dark Chocolate Mousse with Expresso. Jen Reviews

Try both methods, but most important, dare to test your own creativity and ...


1. Make raspberry Jell-O per box instructions. Allow to thicken and firm without being fully set (but not watery). Chill evaporated milk in large mixing bowl in freezer for at least thirty minutes and chill beaters in freezer. The milk should have formed a few ice crystals around the edge and bowl and beaters should be quite cold. Do not remove until ready to whip (see instructions below.)

2. Fresh raspberries: Place half in saucepan with sugar, cook and stir until they break down into a puree. Put puree through strainer to remove all seeds. Save best raspberries for garnish.

3. OR Frozen sweetened raspberries: Thaw, strain to remove all seeds. Retain all pureed berries, mashing if necessary. Save best berries for garnish.

4. Melt chocolate chips or pieces in microwave with small amount of milk. Stir occasionally. When melted stir in raspberry puree and almond extract. Set aside.

5. Remove slightly frozen evaporated milk, bowl and beaters from freezer. Beat evaporated milk in large mixing bowl. It will whip like whipped cream and will almost triple in volume so be sure to use your large mixing bowl. After beating with chilled beaters for about 30 seconds, add half of powdered sugar and 1 tsp almond extract. (Powdered sugar contains a small amount of cornstarch which helps to firm up the whipped cream.) Evaporated milk should whip to form firm, soft peaks and resemble a good whipped cream. Jell-O should be just set and neither hard nor watery. Begin adding small amounts of the Jell-O to whipped evaporated milk. Continue until all has been added. Set this in fridge until ready to fold in chocolate mixture.

6. Chocolate-raspberry-almond mixture should still be warm. If not, microwave until just warm. Whip softened cream cheese and fold into chocolate mixture.


Look for us in December! See pic below. 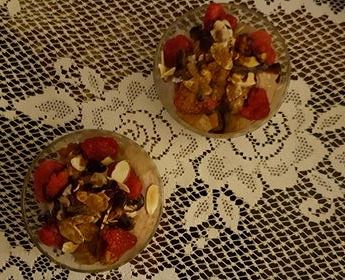