And this is good old Boston
The home of the bean and the cod,
Where the Lowells talk to the Cabots
And the Cabots talk only to God.
©John Collins Bossidy.
Since I saw you last I’ve spent a very enjoyable week in Boston and I have to say that the New England Fall is all that it’s supposed to be. What was I doing in Boston? I was, with 102 others, supporting the CIE Transport Gaels Gaelic football team. They played a Boston GAA Selection on the Gaelic pitch beside the Irish Cultural Centre, Canton, on Saturday 16th October.

They were beaten fairly and squarely by the Boston team but it didn’t spoil our week.

We had arrived on Wednesday 13th and had a get-together in M.J. O’Connor’s Irish Pub that evening. Ballads and banter took us into the early hours. Next day was a shopping trip to Wrentam. Have you ever been in the company of a large group of Irish shopping activists?

On the Friday night we went to see Shear Madness at the Charles Playhouse. This play which has been running in the USA for thirty years was enjoyed by one and all. The audience participation was suited to our Irish crowd. I recommend Shear Madness to banish the blues.


After the match on Saturday we had a meal, music and the craic in the Irish Cultural Centre where we met American musicians and singers who are “more Irish than the Irish themselves.”
I discovered that our PRO John Cassidy is related to Bill Clinton through his (Bill’s) mother. John is also a cousin of Boston’s ace journalist Chris Cassidy.

We stayed at the posh Boston Park Plaza hotel, a favourite haunt of the aforementioned Bill Clinton. President Obama was visiting Boston while we were there and it was rumoured that he would be staying at our hotel but he didn’t arrive.

A bus tour of Boston was really worthwhile; it’s a very historic city. On the Tuesday before our return we went to Cape Cod. Very interesting but coming from Ireland cedar-dwellings takes a bit og getting used to. Not a solid structure for miles.

While in Boston I learned that Michael (“Mickey”) Conneely, from Ballyconneely, Co. Galway, who had been living in Weymouth, Massaeutessis, died suddenly aged 52 last March. He left behind his widow Jeannie and two young children. The Irish community have rallied round to raise funds for this heartbroken family. 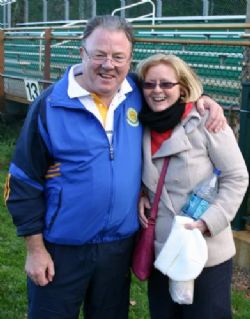 Above:     CIE Transport Gaels Manager, John Brady, with his wife.