Always Looking: People Who Made A Difference XIII

What you should say to outsiders is that a Christian has neither more nor less rights in our Association than an atheist. When our platform becomes too narrow for people of all creeds and of no creeds, I myself shall not stand upon it. — Susan B. Anthony

Susan Brownell Anthony (1820-1906) played a pivotal role in the 19th-century movement to gain women the vote in the United States. Born in Massachusetts to a strict Quaker abolitionist family, she was inculcated with self-discipline, principled convictions, and belief in one's own self-worth. Anthony was a precocious child who learned to read and write at the age of three. She was taught in a “home school” set up by her father but run by a woman teacher who offered a new image of womanhood to Anthony and her sisters — independent, educated and holding a position traditionally reserved to young men.

Ultimately, Anthony was sent to boarding school near Philadelphia. Then she taught at a female academy, Eunice Kenyon's Quaker boarding school, in upstate New York from 1846-49. She settled in her family home in Rochester, NY, where she began her first public crusade, on behalf of temperance, one of the first expressions of feminism in the United States as it dealt with the abuses of women and children who suffered from alcoholic husbands.

In 1849, Anthony gave her first public speech for the Daughters of Temperance, then helped found the Woman's State Temperance Society of New York. In 1851 she went to Syracuse to attend a series of antislavery meetings. During this time she met Elizabeth Cady Stanton, became fast friends and joined Stanton and Amelia Bloomer in campaigns for women's rights. Stanton, married and mother to a number of children, served as writer and idea-person. Anthony, who never married, was more often the organizer and the one who traveled, spoke widely, and bore the brunt of antagonistic public opinion.

From 1854 to the outbreak of the Civil War, she devoted herself to the antislavery movement, serving as an agent for the American Anti-slavery Society. After the War, she collaborated with Stanton in publishing the New York liberal weekly, The Revolution (1868-70), which called for equal pay for women.

In 1872, Anthony demanded that women be given the same civil and political rights that had been extended to black males by the 14th and 15th amendments. She led a group of women to the polls in Rochester to test the right of women to vote. She was arrested two weeks later. While awaiting trial, she engaged in highly publicized lecture tours and, in March 1873, she again tried to vote in city elections. After being tried and convicted of violating the voting laws, she succeeded in refusing to pay the fine. From then on she campaigned endlessly for a federal woman suffrage amendment through the National Woman Suffrage Association (1869-90), the National American Woman Suffrage Association (1890-1906), and by lecturing throughout the country. In 1881-1902, along with Stanton and Matilda Joslyn Gage, she published the History of Woman Suffrage in four volumes.

In 1888 she organized the International Council of Women and in 1904 the International Woman Suffrage Alliance. Although she did not live to see the consummation of her efforts to win the right to vote for women, the establishment of the 19th amendment is deeply owed to Anthony's efforts.

Though born a Quaker, Susan B. Anthony attended the Rochester First Unitarian Church for many years. In an 1892 letter on the occasion of the church’s 50th anniversary, she wrote (in part) "[Some] of the pleasantest memories of Rochester — my home — the past forty years — are associated with the ministers and friends who will have honorable and loving mention during . . . the gatherings of these two days."

Click on John I. Blair for bio and list of other works published by Pencil Stubs Online.See Portrait of Susan B. Anthony below. 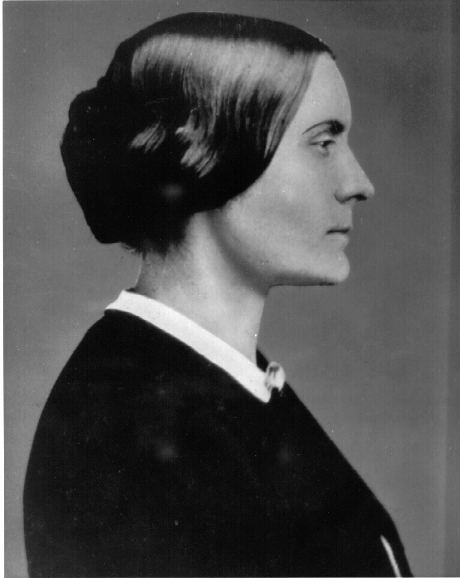