A member of a prominent and wealthy abolitionist family, Robert Gould Shaw was born in Boston in 1837 and grew up in a privileged life. As a young man working in an uncle’s office in New York City he had come to consider himself a failure. But after he enlisted in the Union Army at the outbreak of the Civil War, he soon distinguished himself as a soldier. He was one of the troops defending Washington against attack in 1861 and in 1862 fought as part of the 2nd Massachusetts Infantry in the battle of Antietam, being wounded twice in combat.

Shaw, by this time a captain, was one of the officers recruited in 1863 by Massachusetts Governor John A. Andrew to raise and command one of the first regiments of black troops for the Union, the 54th Massachusetts Volunteer Infantry. The regiment was composed primarily of free African Americans, from several states, and included two sons of famed abolitionist Frederick Douglass. Shaw was initially unenthusiastic about this assignment, but the dedication of his men deeply impressed him and he grew to respect them as fine soldiers.


He was rapidly advanced in rank, first to major, then colonel so that he could lead the regiment into combat. When the troops were trained, they were assigned to the front in Georgia and South Carolina. The unit performed poorly in its first military engagement, at Hilton Head, South Carolina. In July 1863, however, the troop performed ably, holding off Confederate forces at James Island, South Carolina, until leaders could organize a defensive retreat.

Shaw then volunteered his troops to join in an attack on Battery Wagner, the first step in an assault on Charleston. Although the attack, on July 18, 1863, failed, the Fifty-fourth fought valiantly; 272 were killed, wounded, or captured, including Shaw, who died leading the attack. The dead, including Shaw, were buried in a mass grave. The exemplary performance by the unit helped to dispel the idea that blacks lacked the intelligence or the discipline to perform well as soldiers.

In 1897 a bronze and stone memorial designed by Augustus St. Gaudens and Stanford White was dedicated on the Boston Common across from the Massachusetts State House. (See below) Upon its unveiling, William James, as part of his dedicatory speech, proclaimed “There they march, warm-blooded champions of a better day for man. There on horseback among them, in his very habit as he lived, sits the blue-eyed child of fortune upon whose happy youth every divinity had smiled.”

Shaw is well-known for the over 200 letters he wrote to his family and friends during the war, now preserved at Harvard University. The book Blue-Eyed Child of Fortune, edited by Russell Duncan, includes most of his letters and a brief biography. They are also quoted liberally by Ken Burns in his documentary miniseries The Civil War. In 1989 the story of Shaw and the 54th Massachusetts was dramatized in the movie, Glory, with Shaw portrayed by Matthew Broderick. In music, Shaw, the 54th regiment, and the Boston memorial are the subject of a segment of Charles Ives's well-known piece Three Places in New England. New England poet Robert Lowell referenced both Shaw and the Shaw Memorial in his major poem “For the Union Dead.” In it appear the lines:

Shaw's father wanted no monument
except the ditch,
where his son's body was thrown

Pic Below shows the famous monument in Boston 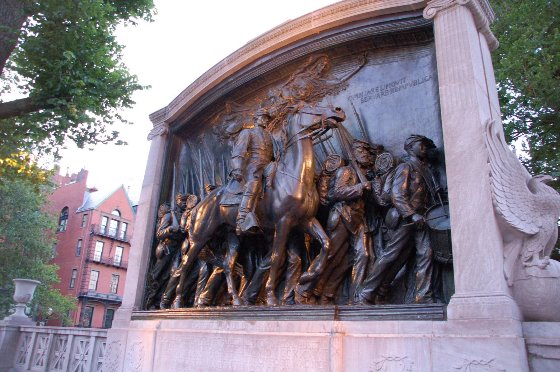