In the nineteenth and early twentieth century the party held before a person departed for the USA was known as an American Wake. This was because, whatever about the person’s siblings seeing them again, it was highly unlikely that the parents would ever set eyes on that son or daughter again.

At home the traditional Irish Wake was held up until about forty years ago. When the body of the dead person was “laid out” (there was usually one person in the area who traditionally did this) friends and neighbours would arrive. Nowadays when there is a house-wake the deceased is usually in a coffin but in olden times the corpse was left in a bed dressed in a brown habit. The smell of wax-candles would fill the room and Holy water from a dish would be sprinkled by each visitor.

There would be lots of food and plenty of drink to be consumed. Clay pipes, tobacco and snuff would be distributed. The simile “like snuff at a wake” has entered the lexicons of expressions. People would come and socialise and remember the departed person's life. Unless it was the tragic death of a young person it would be more of a party than a funeral. The “parlour games” sometimes boisterous, were not perceived as disrespectful of irreverent but as a means going some small way to help the bereaved deal with their grief. It was the traditional Irish way of celebrating one's life and ensuring that they had a good send off. People adhered to the maxim “speak well of the dead.” Cynics might say that this was carried to the point of hypocrisy. In Sean McCarthy’s song you’ll find the lines;

A mane oul craytor when alive but a fine man now he’s dead.

And according to his fellow county man, that great chronicler of rural life, the late, great John B. Keane, one departed man was remembered thus; “He responded neither to prayers nor to priestly touch and since they could not countenance his damnation in the presence of outsiders they felt it was in order to construe his final fart as a deathbed conversion.” On another occasion the famous Listowel man had this to say, “How proud we would be if we could see previews of our funerals. What a shame the deceased cannot acknowledge the regard of those who loved him not in life but lauded him in death.”

In his book 'Irish Wake Amusements', folklore author Sean O Suilleabhain gave a detailed account of what went on at wakes after the Rosary was recited at midnight; From songs that couldn’t be sung in the presence of a maiden aunt to games bordering on the obscene. All sorts of tricks were played, mixing pepper with the tobacco, tying old men’s coats to chairs hiding under the bed of the corpse and shaking it to frighten those of a nervous disposition. Sometimes the Rosary would be recited more than once. The Rosary would usually be 'given out' by an important figure - teacher or leader who would recite the first decade then the relatives would take part.

Charlie Reilly lived with his father in Ballynultagh, an isolated and thinly populated glen in the heart of the Wicklow mountains. The nearest shop was in Lacken three miles away. One day Charlie set out for Lacken to buy provisions. When he arrived he found that a local person had died and a wake was in progress. He partook of the hospitality of the wake-house and stuic around for the funeral; taking the corpse to the Church in the evening and the burial next day.

By the time the funeral was over another person had died and Charlie attended that wake and funeral and all that went with it. It was almost a week before he arrived back home. When his father asked where he was he was told, “I was at two funerals in Lacken; how is it we never have a funeral here”?
But the Irish wake is not dead (pun intended.) Two different Funeral Directors in a town in Donegal set up funeral parlours. They didn’t catch on. In the words of one local Undertaker , “The wake in the family home is still even to this day the way people express their condolences to the bereaved family.”

Steven Smith, a Columbus, Ohio native, is a "different" Irish American. He is an 'Irish Wake Instructor,' teaching people about the Irish way of dealing with death, in particular the tradition of wakes in 19th century Ireland. Sometimes described as “the eccentric Irish American” he believes Irish wakes are “the healthiest way for the mourners to participate in the send- off of the deceased.”
He doesn’t use the term 'Irish Wake Instructor' himself. He told me, “It is difficult to come up with an accurate term for what I do; I think of myself more as a keeper of the old ways and a disseminator of the same.”

Steven, who works in a tent made up as an Irish cottage, tells his audiences , “Irish wakes became more like parties because it was illegal for Irishmen to be together at the one time, in case they were planning a rebellion against the British Government. The exceptions to this rule were weddings and funerals. So they really made the most of those times.” He says that many funeral parlours contact him for advice on preparing an Irish wake. “It is a real celebration of life, and the life of the person leaving the community,” he says.

Click on Mattie Lennon for bio and list of other works published by Pencil Stubs Online.See Below:Commemorating at an Irish Wake 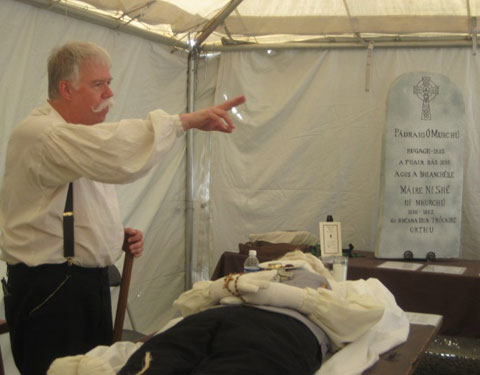