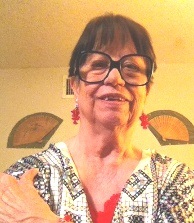 May is on a stumbling route getting here it seems, making her way through the diverse weather conditions April has spread around the world. Not content with the traditional 'showers' many have been deluged with flooded areas or blown here and there by the vicious tornadic winds. One hopes May will be more gentle.

Phil Hennessy realized he had failed to share the lyrics of the song (Joining Hearts) he composed as a National fund raiser in the UK last year, so he fills us in on the facts about it and includes a link so you can hear it sung by Paul Salvage and a school choir which included Phil's children. He also includes "My House Is Warm."

Bud Lemire checked in with "A Poem About Nothing," "Feel My Touch," "Created to Be Unique," and "April's Snow." Bruce Clifford submitted two poems for this issue: "Any Way You'd Like" and "You Can't Find No Relief."

One of the articles is by an author we have shown here before, Diane Terry Lynch aka Spirit0662 who discusses "Falling in Love." The other article lets LC Van Savage say something about Slinkys.

Thomas F. O'Neill, "Introspective," talks about the robot technology that goes beyond toys. He also updated his profile pic which I am placing below on this page.

LC Van Savage's column "Consider This" confesses what she always carries in her pocket. Would you believe - an elephant? Mattie Lennon in "Irish Eyes" details the historical attraction EPIC Ireland that visitors are flocking to this year. A collector's type DVD has also been released about the infamous "Famine Pot." Lennon explains his feelings about the census as well.

In "Adventures of Ollie-Dare" Chapter 13 by Rebecca Morris, the bear goes to the Circus.

Watch for us in June!