From Writers’ Week To Knockanstockan

June was truly a month of culture. From June 01st to June 05th there was Listowel Writers’ Week. Once again we could bask in the wit and wisdom of Ciaran Carson, Patsy McDermott, P. J. Kennedy Hilary Fanning , Peter Sirr, James Runcie and dozens of others too numerous to mention.

Theate, Poetry readings, Book launches and Literary workshops catering for everything from “ Creative Writing Getting Started” to “Poetry Advanced.”

As usual it finished with a marathon Open-mic session (“The Healing session”) in John B. Keane’s famous pub.


And speaking of Kerry: When I read that the Kerry County Councillor, John Joe Culloty (see pic above), recommended that we eat Japanese Knotweed I immediately contacted a Japanese friend of mine who sent me the following recipe:

Originally described as Reynoutria japonica by Houttuyn in 1777 from Japan, that name was lost to botanists for over 150 years, in the mean time the same species was independently named Polygonum cuspidatum by Siebold and Zuccarini in 1845. It was not until the 1901 that Makino, a Japanese botanist, realised that the Reynoutria japonica of Houttuyn and the Polygonum cuspidatum of Siebold and Zuccarini were the same Japanese Knotweed that was introduced from Japan to the unsuspecting West. (It is now seen as a plague.)

But trust a Kerryman to turn the tables on it. After a bit of research I found that there are two kinds of knotweed in Japan, green and red.


Green is used with vinegar and poured over grilled fish.

Red one is good for vinegared cucumbers, salad and spaghetti dishes.


Here’s a few links for you:

And from July 22nd to 24th my home village will stage a music festival to equal Glastonbury, although the dry pastureland of County Wicklow doesn’t call for as many Wellingtons.

The communities of Lacken and Ballyknockan have become an integral part of the KnockanStockan music festival since it began in 2007. The support and co-operation of the residents has been and still is vital to the continual growth and success of the festival. KnockanStockan believe that giving back to the community is top priority.

The valley, which encloses, the beautiful Blessington Lakes was alive with the sound of everything from John Deers to old TVO Fergusans as the 12th Hillbilly Tractor Run was held on Sunday 26th June. The people of Valleymount, Kylebeg, Lacken and Kylebeg were transported back in time as well preserved vintage machines belched out their smoke.

The annual Sean McCarthy Memorial festival will take place in Finuge, County Kerry from July 29th to August 01st. The diversity of the programme can be judged by the instructions on their website for laying a traditional Irish flagged floor:

And guess what - Researchers feel certain that there was a colony of Irish folk living in what is now South Carolina, when Christopher Columbus 'thought' he had discovered the New World. 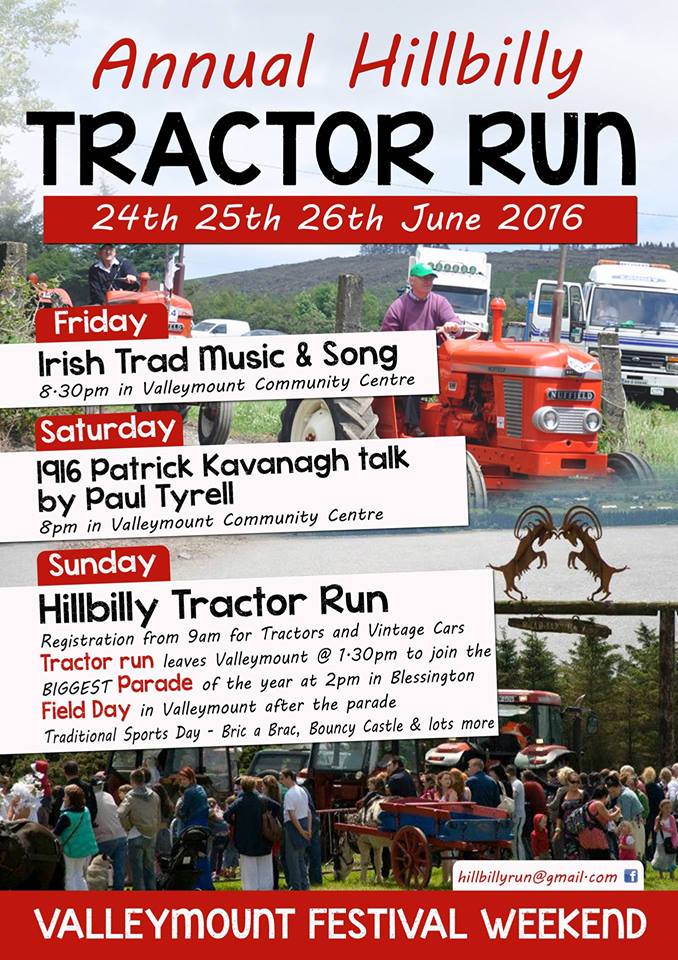