After a quadruple heart bypass Brendan Kennelly felt so thankful to God that he wrote this poem before he left the hospital.

Birthday celebration for Brendan Kennelly was held in the Abbey Theatre on the afternoon of Sunday 23 October, from 3pm – 6pm. Family, friends and fellow artists joined Brendan in an afternoon of words, songs and acclamations of one of Ireland’s greatest poets who is now 80.

Begin again to the summoning birds
to the sight of the light at the window,
begin to the roar of morning traffic
all along Pembroke Road.
Every beginning is a promise
born in light and dying in dark
determination and exaltation of springtime
flowering the way to work.
Begin to the pageant of queuing girls
the arrogant loneliness of swans in the canal
bridges linking the past and future
old friends passing though with us still.
Begin to the loneliness that cannot end
since it perhaps is what makes us begin,
begin to wonder at unknown faces
at crying birds in the sudden rain
at branches stark in the willing sunlight
at seagulls foraging for bread
at couples sharing a sunny secret
alone together while making good.
Though we live in a world that dreams of ending
that always seems about to give in
something that will not acknowledge conclusion
insists that we forever begin.
(Brendan Kennelly.)

Brendan Kennelly is an Irish poet and novelist. Now retired from teaching, he was Professor of Modern Literature at Trinity College, Dublin until 2005. Since his retirement he has been titled ‘Professor Emeritus’ by Trinity College. Galway poet, the late, Paddy Finnegan, always had a story, like the day he was chatting to Brendan at the gate of Trinity College as dark clouds hung overhead. “I feared that rain was imminent for all the portents, for a deluge seemed to be there, low dark clouds and the wind from the Scartaglen direction. Anyhow, I asked the Ballylongford wizard for a meteorological prognostication. He replied in the immortal words: ‘ There’ll be no rain; it’ll be as dhry, as dhry as a witch’s tit.’ He wasn’t gone fifteen minutes when amazingly the cloud dispersed and as our old friend Pythagoras used to say: ‘ Phoebus played a blinder for the rest of the day.”

In the decades that I worked on the streets of Dublin, no matter what the weather was doing, meeting Brendan Kennelly always brightened my day. When President Michael D. Higgins reminded a packed Abbey Theatre of how frequently Brendan used the word “love” in his poems I was reminded of the day that he gave me an explanation of love. He said, “Me mother always said, if you were in love with a heap of dung you wouldn’t see a rotten straw in it.” The man from Ballylongford was always ahead of his time. How many Irishmen born in 1936, if asked by a radio interviewer about the love between their parents, would say, “My mother, God rest her, used to say, ‘ Yerra, whenever your father wants another child in the house sure all he has to do is shake his oul trousers at me.’ I never questioned the validity of that.” When Brendan retired in Pat Boran wrote that the great poet , “has largely withdrawn from public life; he is no longer on our television screens as the ever-engaging, verbally dexterous, popular face of Irish poetry, smiling or not, and we are all the poorer for that.”

He once told me that in parts of Kerry he is not known as Professor Kennelly but, “The little fucker that lost the all-Ireland on us.” There’s a story behind that. Brendan comes from a family with a long tradition of Gaelic football. He played on what was in many experts' opinions the best Kerry minor team never to win an All-Ireland. They met Dublin in that 1954 final, one of the most dramatic ever played. Dublin won 3-3-/1-8. Kerry were five points ahead with one minute to go. Farnan got a Dublin goal and then in injury time Brendan Kennelly, wing back, was alleged to have fouled Vinnie Bell. A free to Dublin near the corner flag was given amid great dissent. Vinnie Bell centered and Kavanagh fisted it into the Kerry net and the better side had lost. Referee Bill Jackson (Roscommon) was blamed for the long injury time added. To this day Brendan, who has great difficulty saying an unkind word about anyone, says, “I still wake up in the middle of the night shouting ‘Fuck you Jackson’” . He then added with that wonderful lilt of his, “You can overcome a bad marriage, you can grapple with and overcome alcoholism, but you'll never get over losing an All-Ireland Final.”

Back to the spectacular celebration in our National Theatre. The cast of luminaries included Listowel natives Dr Bryan McMahon, Jimmy Deenihan and Sean Ahern . Councillor Mannix Flynn , in the course of a brilliant tribute said that Brendan , “ . . . was the first Kerryman I ever met who wasn’t a guard.” Some of Brendan’s poems were read by Aisling O’Sullivan, P.J. Brady and Katie Donovan.

Leitrim poet Stephen Murphy recited a very moving poem abou depression, in the oral narrative tradition. President Higgins compared it to Ginsberg’s Howl. John Sheahan ( who must have a portrait in the attic) on fiddle and Michael Howard on guitar performed “Among Friends.” Lisa Lambe gave a wonderful rendition of “All Around My Hat”, accompanied by Drazen Derek and the eternally young Mary Black sang “No Frontiers” accompanied by Bill Shanley on guitar. Noel O ‘Grady chief organiser of the event and five-time winner of Oireachtas na Gaeilge for traditional singing in Irish, sang several of Brendan’s favourite songs including “The Rose of Tralee.”

Fr. Pat Aherne accompanied his troupe of dancers on the fiddle as they performed “The Molyneaux Blackbird.” World famous photographer John Minihan was clicking away on his “non-digital “ camera. Minihan’s photos of Beckett are some of his best known, one in particular is described as one of the greatest photos of the twentieth century. William S. Burroughs once referred to Minihan as "a painless photographer".

The great man himself ,who now walks with the aid of a stick, was helped on to the stage by Jimmy Deenihan. But if you closed your eyes and listened to the musical voice you would be transported back to the sixties . . . or even 1954 and that lost All-Ireland.

He regaled the audience with stories about Ballylongford, his parents, Kerry football and many colourful observations from his four score years. He read and recited from his own work. To date he has published more than thirty books of poetry. With titles as diverse as, “Up and At It”, “Poetry My Arse” and “The Man Made of Rain.”

Brendan spent three quarters of his life in his adopted city. He loves Dublin and its people. He said the Rosary every day as he walked its streets. He says, “Instead of saying ‘Good day’ to each other, a lot of Dubs prefer the greeting ‘any scandal me aul’ flower?’ sure where would we be without it?”

You could almost see the Gaelic football rivalery evaporate on the Abbey stage as Dubliner Mary Black presented Ballylongford’s favourite son with a red rose. The grand finale to a wonderful tribute to a great man.

“THE BEST OF BILLY KEANE”

Still on matters Kerry/Literary; “The Best of Billy Keane”, published BY Ballpoint Press, will be launched by Stephen Rea, in the Shelbourne Hotel, Dublin on Wednesday 02nd November at 06.30 PM . The Listowel journalist, author wit, after-dinner speaker and all- rounder writes his columns and books with a wonderful mix of innocence, forgiveness and understated perception. He has been described as an ”. . . observer at the front door looking out on middle Ireland and beyond." Be it a family sadness, a quirky day in the pub or a national issue of suicide ( he has written articles on suicide which, in my opinion, have saved lives.) or gay marriage, Keane’s inimitable style is always insightful and thought-provoking. I have absolutely no interest in sport. You are wondering why I put that in. But I read Billy Keane’s columns on the subject because like all his writing, his commentary is often arrived at following a journey on the road less travelled - he approaches subjects from different directions before fleshing out his views with uncanny empirical understanding.
He writes not to preach but as the discerning sinner turned confessor. Billy finds extraordinary deeds in day-to-day living and shares them with an equal mix of humour and empathy.


This man of many parts is also, like his father before him, the late John. B., a thoroughly decent man. (See pic below)

For those who have been frustrated trying to read the info about Famine Pots, here is the updated link: Irish Famine Pots 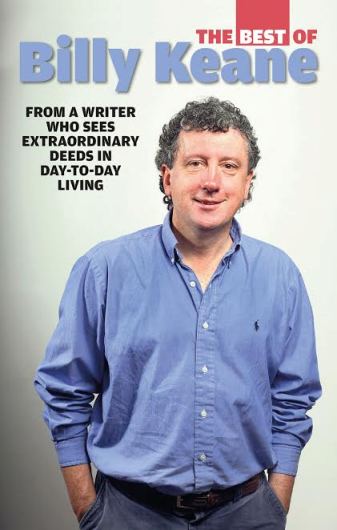