The Story of A Brave Irish Policeman

“ In An Garda Siochana . . . loyalty is prized over Honesty.”--Judge Peter Smithwick.

Since I saw you last I attended two nights of culture at its best; singing, music and storytelling, at Blessington, County Wicklow and Brittas, County Dublin. I also read a book which should appear on the bestsellers list. If it doesn’t there is something wrong somewhere.

Whistle-blowers and some Gardaí always got a bad press. Whistle-blowers were called “squealers”, “Stool-Pigeons”, “rats” and many more uncomplimentary names. It’s not long ago since the editor of a provincial paper wrote in an Editorial, “Those are the same sort of people who would slip in through the back door of the RIC barracks in the dead of night to inform on their neighbours in more turbulent times. They are the poisoned possessors of little minds. . .”

Acclaimed writer Stan Gebler Davis wrote, “Policemen, as a rule, are not very bright; if they were they wouldn’t be policeman.”

One of the most famous whistle-blowers of recent times is Garda Sergeant Maurice McCabe. His story is told in a recently published book “A Force for Justice” by award-winning journalist Michael Clifford. Michael was Print Journalist of the Year in 2014 and Newspaper Industries Journalist of the Year 2016. He has written many non-fiction bestsellers and crime fiction novels.

Maurice McCabe didn’t set out to be a whistleblower but he did set out, from a very young age, to be a Garda. As a twelve-year old schoolboy he made that clear. When his class were given an exercise to map out their lives from the cradle to the grave young Maurice made it clear that he was “ . . . going to be the head of the Guards one day.” Calvin Harris said, “When I was eight I wanted to be a policeman so that I could tell people off.” Maurice McCabe didn’t want to be able to tell people off. He wanted to be a good cop who would do things right and make Ireland and the world a better place. His first application was rejected because he was an eighth of an inch too small. On the second application he was deemed “too light to serve.”

Tenacity and cohesion won the day ; he was accepted on the third attempt and in August 1985 Maurice McCabe walked into the Garda Training College in Templemore, County Tipperary. In 1999 he was promoted to the rank of Sergeant. As a sergeant in County Cavan he found the incompetence and corruption too much. In 2008 he complained about shoddy and inadequate investigations into serious crime in County Cavan. He paid a big price. A rough ride lay ahead of him. He was at the receiving end of vilification, bullying and harassment. Some of his subordinates turned against him. Commissioner Martin Callinan publically described his actions as “disgusting.” When I saw the clip on television I asked myself, “Is this the sort of statement we should expect from a two-time graduate of the FBI National Academy in Quantico, Virginia.” Later Superintendent David Taylor admitted to Maurice, “ We wanted to destroy you.”

When Maurice McCabe’s detractors referred to him as a “stickler” it wasn’t meant as a compliment but all right-thinking people know that it means a person who insists on doing the right thing, and insists that others do it, unyieldingly.

In 2002 a penalty points system was introduced for a number of motoring offences, the most prominent being speeding. This system along with the establishment of the Road Safety Authority in 2006 led to a incredible reduction in road deaths. When Sergeant Maurice McCabe discovered that a large number of Fixed Charge Notices were being cancelled by senior officers he did some digging. The results have been well documented . He showed that he was not part of the “blue glue” which enabled Gardai to stick together when they closed ranks.

On World Day of Remembrance for Road Traffic Victims, 20th November 2016, Sergeant Maurice McCabe was presented with the ambassador of the Year Award for Road Safety and Road Victims. When the brave sergeant stepped up the microphone he said, “ I tried to make a difference and I think I have.”


Martin Callinan retired in 2014 and his successor, Commissioner Noreen O Sullivan, retired in August 2017. The commission on the Future of Policing in Ireland has warned the government not to appoint a new commissioner too quickly. It could be six months before the next commissioner is appointed. But what sort of a person do we want in the position? Sunday Independent journalist Eoghan Harris put it in a nutshell, ” What the Garda needs right now is a fearless Irish cop cut from the same cloth as Maurice McCabe”.

Maurice McCabe and his family have traveled a horrific journey and Michael Clifford brings the reader every step of the way with them.

“ A Force for Justice” is published by Hachette Books Ireland and details are available from Sharon Plunkett at; Sharon@plunkettpr.com

See you in November 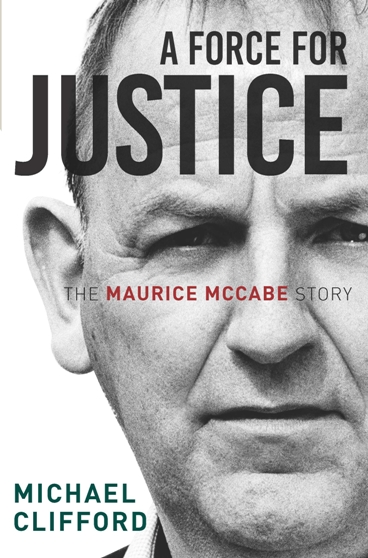