Another brother has left this plane
No longer sick, no longer in pain
I'm taken back to a time long ago
To this same brother, who I came to know

We called him Dick, and each time he'd come to stay
With John and I, he had a nickname to say
John was Pauncho Villa, and he called me Deadhead
He would pick us each up, and that's what he said

Athletic, sports was always his aim
He'd take us occasionally, to a baseball game
When he was in Escanaba, he'd get together with Mark
He'd be off with his friends, until long after dark

He's hang out at the Meisner's, where he would stay
Any time he happened, to come up this way
When he attended a Class Reunion, a few years ago
He stopped by to see me, it was a special hello

I recall through the peep hole, I saw a fist
It was my brother Rich, who belonged to that wrist
A gathering at Stonington, was the next place he'd be
Surrounded by family, he was so good to see

A coach and a health teacher, he touched quite a few
He was a brother, that I was so glad I knew
Now he's been taken home, to be with his Mother
I'm proud to say, that he was my brother

He always called me Deadhead when I was young. He
really came a long way in life and accomplished so much.
I'm so happy he stopped to see me at the Harbor Tower.
Now as he makes the transition into spirit. I shall say a prayer
to carry him further into the light, in the presence of his
loved ones there. To know he will be watching over his
loved ones here on Earth, and guiding them with his spiritual
presence. Be aware, a smell, a sound, a memory, that is him.. 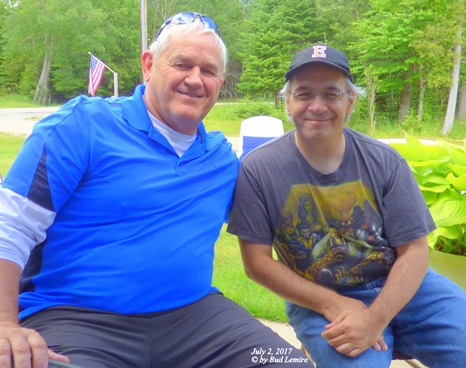