Long before it was a Pub, it was Party Store
I remember those days, and so much more
Ernie Bernard started the store in the late fifties, here
You could go in there for candy, cigarettes, comics, or a beer

Art Messier took over, for seventeen years he was there
I remember the buck stopped there, it was quite an affair
Among those who worked there, these I will name
There was Mrs. Johnson, Mrs. Cass, and Jerry Mongrain

After Art owned it, a LaFave owned the place
Then came Hank, who took up the base
Time passed, and before long it became
An Irish Pub, but it carried Ernie's name

Ernie, the man who started it all, was my friend
I kept in touch with him, until the very end
I remember his wife Mina saying “If only Ernie could see”
“They made it an Irish Pub, there's no Irish in his family tree”

The memories I have, of going in that store
Every time I bought something, and came out the door
The comics, the candy, and the cream soda too
Now it's an Irish Pub, the time really flew

I lived on North 14th Street back then. I use to go into
Ernie's Party Store many times as I grew up.
It'll be a big part of my childhood memories,
for the rest of my life. Great memories!
I honor all the workers and owners, who
kept the store going. I honor the man
who started it as well. 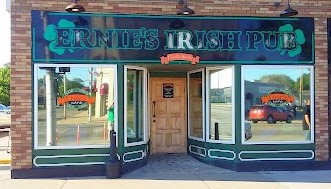