Memories by June -I REMEMBER PYOTE

The Cockpit of The Enola Gay
http://www.davidpalermo.com/data/slideshow/4/index.html
Cool photography..   Lots of history in this clip!
Check this out. This gives you an HD 360 Degree view from the cockpit
of The Enola gay; the plane that dropped the 1st Atomic bomb on
Hiroshima.      This plane was built at the Martin Bomber
manufacturing plant in Omaha in Building D. (now Offutt AFB)
This is pretty amazing, you can look around, but look down too and up
in the cockpit of the Enola Gay B-29 the Japanese will never forget!
It ended the war and that was its mission and intention.
You can manipulate the camera up, down and around, pretty cool.  gotta
love The "horn" button.
Be sure and drag the pointer (cursor) in all directions.


(Editor's Note: the link above worked in Internet Explorer but not in Firefox for me.)
From My Box of Memories
By June Harper Hogue
And now my story begins . . .

It was the Spring of 1942.  I had just turned 8 and was in the second grade, but I remember it well.  We had just moved to Monahans, Texas from Crane, Texas, a small oilfield and ranching town situated in the middle of a wind-blown mesquite laden prairie in a rather remote area of West Texas. To the south one could see the distant hills that beckoned one to explore Castle Gap, a pass between the hills on the Goodnight Trail of which many legends have been built…and much of West Texas history has been written.   We could see Castle Gap in the distance from our yard in Crane.  To the north were the seemingly endless mesquite pastures of the Pegasus Oil Field which bordered Midland and Odessa and  to the west were more of the same endless mesquite pastures dotted with greasewood.  To a child…Crane was not an especially interesting place to be.  Though I did not understand it at the time, WWII had just been declared and our move to Monahans meant that I was about to step into a whole new world of exciting and interesting new adventures.

Monahans was considerably larger than Crane and not isolated from the mainstream of life.  It was on Highway 80, the major connecting highway across the southern United States from California to Florida. It seemed there was always traffic on that highway and the railroad ran parallel to it.  Monahans was a main watering station for trains passing through…a new interest for me and my 3 brothers, for we had never before lived where there were busy railroad tracks with passenger trains that passed through!    From the beginning Monahans (which was 22 miles east of the state line of New Mexico) provided a whole new range of experiences for me.
Bordering the town on the east were great sand dunes (now known as Sand Hills State Park) and they were only about a quarter of a mile from our house!  Not only that, one of the world’s largest oak forests covered a large portion of those nearby sand hills.  They were Harvard oaks which grow only about 18 inches high and produce acorns just like other oak trees.  The desert flora fascinated me from the beginning.  Dotted throughout the dunes were occasional ponds of water (known as THE SEEPS) which ranged in depth from 12 to 20 feet deep in places.  Here the cold crystal clear water seeped out of the sand between the dunes, , and low willows grew on the banks around them.  For reasons unknown, many of the seeps had gold fish in them.  As I grew older I learned that these dunes extended all the way through New Mexico as far as the White Sands proving grounds.  This was a band of sand hills that few people really knew much about, even to this day,  but they proved to be very important to the war effort during WW II.

The town of Monahans seemed to bustle with activity. There was a small airport and we enjoyed watching the small planes that flew over us and tipped their wings as the pilot waved to the folks on the ground below.  Gradually  we began to notice an increase in the airplanes flying overhead …there were not only small private planes but we began to notice large military planes as well.  Mother and Daddy reminded us that we were in a war and we would soon see many more planes in the sky.   We began to hear the word “Pyote” mentioned often and then…gliders and blimps began to be seen overhead…. and over and over we heard the words: PYOTE….PYOTE….what was it all about?

We began to hear rumors about a large airbase that was being constructed at a place called PYOTE, a small town 18 miles to the west of us.  Everything seemed to be so secretive at first, but then we began to see soldiers in uniform about town and new words began to creep into our vocabularies as we began to became familiar with the idea of…war…WAR…Pearl Harbor…the Japanese…the Germans…rationing….and PYOTE!   Our parents explained what happened at Pearl Harbor and the meaning of war…and the draft!  Would our Daddy have to go to war?  How long would it last?  And what was the meaning of PYOTE?  Eventually we learned that the small town of Pyote, which was 18 miles to the west of Monahans, had been chosen by the government as the site to construct a huge  and highly secretive airbase where bombers would train. 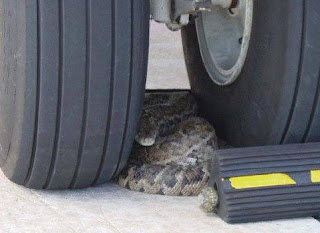 Because of the millions of rattlesnake dens and rattlesnakes that were found during the construction of the base it was named RATTLESNAKE AIR BASE.

It was to be THE base for training all bombers during the war.   It also meant that we could expect the influx of thousands of people who either worked on the base or were families of soldiers who were to be stationed there.

What would this mean  for Monahans?  It would take a lengthy volume to tell all about the changes that took place, but ...

YES, I REMEMBER PYOTE and the name awakens all those memories of World War II and of home…Monahans! To me, the two were an inseparable part of my grade school years, indelibly written on my heart with love and thanksgiving to our Creator for a victory that could not have been won without…PYOTE’S RATTLESNAKE BOMBER BASE and THE ENOLA GAY!